People who love to bake do so year-round, but the holidays are when bakers really pull out all the stops.

Once a year, we indulge our families and friends by creating rich, indulgent desserts with expensive ingredients — often dishes that a great-great-grandmother or a favorite aunt made. It’s the taste of tradition.

The great holiday cakes are in their own special league, and fruitcakes and rum cakes are in another category altogether. Both use brandy, bourbon and rum to flavor and preserve them.

In the 1970s and 1980s, late-night comedians led the anti-fruitcake chorus. It became fashionable to decry the fruitcake. Some smart-alecky Times-Picayune reporter had the bad taste to say something snippy about fruitcake to one of Greg Sorensen’s forefathers. Sorensen’s family, owners of Baker Maid, has baked Creole Royale Fruit Cake in New Orleans for more than 50 years. The reporter was informed that more people would eat that fruitcake than would ever read the guy’s article.

Rum cakes never got a similar bad rap. American rum cakes today tend to be pound or butter cakes with rum in the glaze and, sometimes, the batter. Compared to fruitcakes, the rum cakes we know today are mere youngsters. The incredibly popular Bacardi Rum Cake, based on a yellow cake mix, was introduced in 1976 — relatively speaking, fairly recently.

The cake was created when Bacardi’s then-president William Walker was entertaining at his home in Miami, according to the best-selling The Cake Mix Doctor. A neighbor invited to a party at Walker’s house brought a cake made with Bacardi’s dark rum in the batter and glaze. It was such a hit that the company’s corporate chef made one to serve to Bacardi executives. A vigorous advertising campaign ensued, and everyone was crazy for Bacardi Rum Cake.

An exceptional version of rum cake, known as Satsuma Rum Cake and created by the late Antoinette Ragas of Buras, Louisiana, was discussed by author Jude Theriot in his 1983 La Meilleure de la Louisiane/The Best of Louisiana cookbook. The recipe took third place in the 1976 Plaquemines Parish Fair & Orange Festival’s Women’s Division, and Mrs. Ragas had several other winning recipes that year, in “previous years and for many years after,” according to Paula Cappiello, past secretary for the annual fair and festival.

The cake recipe includes in its ingredients the grated zest of two satsumas and a lemon in the batter, and the juice of both citrus fruits in the glaze. It tastes like a Gulf Coast holiday. Buttermilk in the batter gives it a wonderfully tender crumb.

Fruitcakes have been around since the Middle Ages and possibly even as far back as Roman times. The advantage of fruitcake is its keeping quality. They can be made up to three months in advance and aged in a tin or foil, improving with repeated spritzing or dosing with liquor.

In these enlightened times, we can appreciate fruitcake for its history, utility and, yes, its deliciousness. The haters never had a good homemade fruitcake with just enough spicy batter to hold together the dried or candied fruits and copious amounts of nuts, not to mention a judicious amount of brandy or bourbon.

I’m here to tell you: lots of people still make fruitcake at home. Alton Brown’s Free Range Fruitcake recipe on foodnetwork.com has 257 reviews, all five-star. The Tampa Tribune has to print its recipe for Mrs. Harvey’s White Fruitcake every year.

In 1956, Lucille Harvey won a recipe contest with the recipe known as “the fruitcake people like to eat.” She didn’t use any alcohol in the recipe, but brushed bourbon on the cake with a special brush, according to Anne Byrn’s 2016 masterwork cookbook, American Cake: From Colonial to Gingerbread, the Stories and Recipes Behind More Than 125 of Our Best-Loved Cakes. 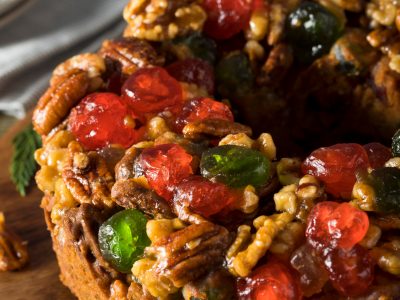 Mrs. Harvey shipped fruitcakes to servicemen in 13 foreign countries overseas during World War II. The sturdiness of fruitcake for shipping made it especially appropriate for packages, although the rationing of many ingredients at the time made them even more prized. Assistant Director for Curatorial Services Kimberly Guise of the National World War II Museum told me last year that the museum’s archives contain many letters thanking the folks at home for the holiday fruitcakes sent to the soldiers.

The 2009 book by Robert M. Edsel and Bret Witter, The Monuments Men: Allied Heroes, Nazi Thieves and the Greatest Treasure Hunt in History, has a passage that evokes the impact such a package could have. One of the Monuments Men, George Stout, received a long overdue package from home.

“It was an artifact from another world, a connection to his old life, and he stared at it fondly. He believed in duty and honor, but like everyone else, he was homesick. He thought of his kitchen back home and his wife over the mixing bowl, and of his sons … The cake was still good, moist and delicious. It’s amazing how the world can change, he thought, during the lifespan of a fruitcake.”

New Orleans has its own fruitcake, the one the Sorensen family has made for more than 50 years. Greg Sorensen’s great-grandfather is the creator of the Creole Royale Sliced Fruit Cake, and the family’s Baker Maid factory near the Superdome has been baking them for months in preparation for the upcoming holiday season. (Baker Maid is also the developer and baker of the Love, Cookie brand, also sold by Rouses Markets.)

The Creole Royale has a unique topping layer of thinly slivered almonds. Each slice is individually wrapped, and the tin it is sold in depicts a pastel Jackson Square, with St. Louis Cathedral in the background. The image is the work of Charles Henry Reinike, who, according to Louisiana Cultural Vistas, was one of New Orleans’ most respected artists and art teachers from the late 1930s until his death in 1983.

“He started selling fruitcake to different clubs and things, to grocery stores,” Sorensen said. “My dad grew up in all the bakeries and he really wanted to work with department stores. At the time, their holiday programs were massive and intricate. For the next couple of decades, they really focused on Macy’s, Saks, Bloomingdales and so on.” D.H. Holmes and other iconic Louisiana department stores carried these fruitcakes as well.

In the 1950s, the fruitcake was sold in a “hermetically sealed can, back when that was a big thing,” Sorensen said. “Before they sealed it, they would pour a shot of brandy over it, and then they sealed the can.” It was opened with a can opener.

Now, the lid lifts off easily to reveal a ring of neatly wrapped slices. When a friend of the bakery wanted several to take to a Rotary Club meeting, he asked for them to be sent with the pieces individually wrapped. Eventually, that led to all the cakes being cut and wrapped that way.

“It got pretty tedious,” Sorensen said. The equipment they used for wrapping the slices is now antique.

Sourcing the high-quality ingredients is a huge part of the fruitcake work, Sorensen said. “It’s always quite a process. At the end of the day, it’s fresh nuts, glacé fruit and the cake with the in-house glaze on top. One thing my dad does — we craft our own flavors in-house. That goes a long way with the fruitcakes. It’s not some spice blend we get elsewhere. It’s got rum and brandy. It’s such a nostalgic item. We look at every detail of it to make it.”

Sorensen thinks it’s hilarious to find the tins for sale in antique stores, which frequently happens. Long after the contents are gone, that pretty St. Louis Cathedral on the top makes the Creole Royale Fruit Cake tin a popular container for sewing supplies, buttons or any small collectibles in countless homes worldwide.

While I like all kinds of fruitcake, I’m really fond of fruitcake cookies, especially the ones my sister-in-law in Arkansas makes every year. Her recipe is a favorite that’s several generations old. It’s sublime!

So as you can see, there’s fruitcake and then there’s fruitcake. Maybe the reason you don’t think you like fruitcake is because you’ve never had a great one. Go ahead! Try one of these recipes, and you might just change your mind. 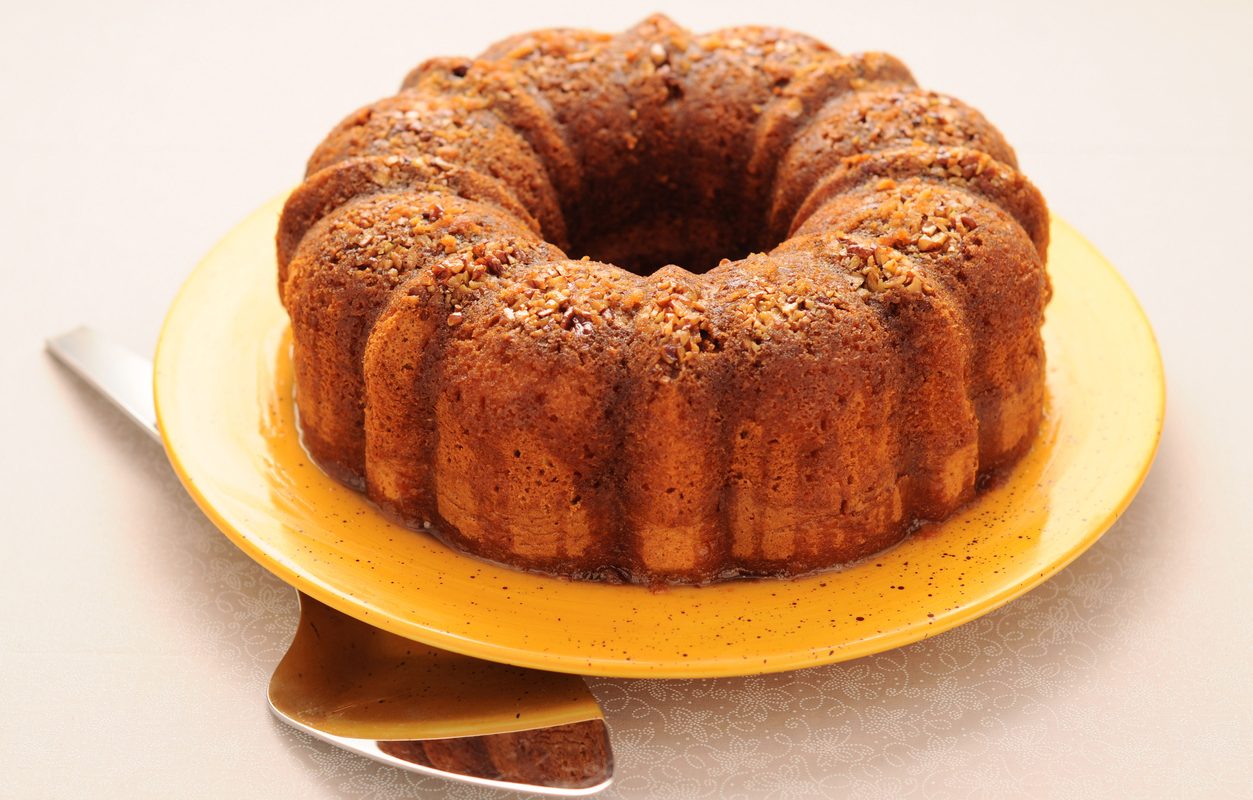 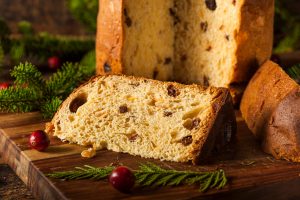 Panettone are sold all over Italy, especially in Milan, where this tall Christmas bread filled with dried raisins and candied oranges was invented. Like fruitcake, which panettone resembles, the sweet treat is served during Christmas celebrations — especially on Christmas Day and Santo Stefano (the feast day of St. Stephen and a national holiday in Italy, celebrated on December 26). It is also customarily eaten on New Year’s Eve and New Year’s Day. Our panettone was personally tasted and selected on a recent buying trip to Italy.