is Raising the Bar 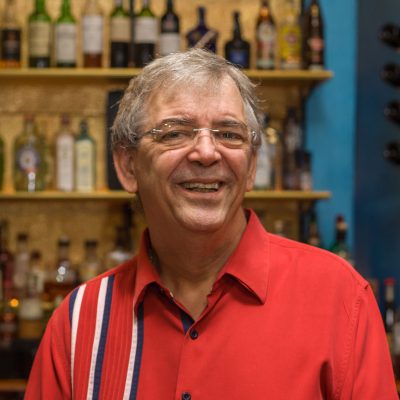 Let’s get something straight: Chris McMillian forgets more about cocktails in one day than I’ll know in a lifetime. Unfamiliar with who Mr. McMillian is? He’s one of the most influential cocktail figures of the last century, according to Imbibe Magazine. He is a fourth-generation bartender. His mother even served drinks to baseball legend Mickey Mantle while tending bar at the Howard Johnson in Dallas. However, McMillian wasn’t born into the bartending business. He entered the business “accidentally,” or rather, he needed a job to pay the bills.

Here in New Orleans, he’s worked as chief bartender at the Library Lounge at the Ritz and Kingfish. Oh, and he’s the co-founder of the Museum of the American Cocktail.

On a recent rainy Saturday, I met with McMillian at his Mid-City bar and restaurant, Revel, a couple of blocks from the Rouses Market in New Orleans’ Mid City. It’s a family affair. He’s the lead bartender. His wife, Laura, runs the front of house, while his son-in-law Jose is in charge of the kitchen. Chris was a bit pressed for time, as the restaurant was expecting a local cocktail club later that afternoon. I assured him the interview wasn’t going to take long — 30 to 45 minutes, I thought. Boy, was I wrong.

Once Chris McMillian gets to talking about cocktails, be prepared to take in a world of knowledge. We covered several subjects during our chat. Curious, I asked McMillian if he remembered the first cocktail that had ever fascinated him. He remembers everything. In this case, it was the whiskey sour. Sometime in the 1990s, McMillian used fresh lemon juice to craft a whiskey sour, instead of using prepackaged mixers. Just like in the culinary world, fresh ingredients make for better cocktails. He said, “We’re into the same trends as the culinary world of fresh, seasonally ripened, regionally grown ingredients. We’re really just mimicking, to some extent, the culinary trends that are going on in the broader society.”

Then we touched on the origins of the modern drink. Punch was the preferred method for drinking distilled spirits in the 18th century in Great Britain. We crafty Americans decided to deconstruct the punch. All drinks made today are variations of one of four forms: the grog, the sling, the sour or the bittered sling. Let’s start with the simplest form, the grog. Also known as a toddy, it is made by simply adding water to a distilled spirit to bring down the alcohol content. Our next innovation was adding sugar, which made it a sling. McMillian said, “Sugar does two things: It masks the intensity of the alcohol and it gives us pleasure. Our brains are hardwired to like the taste of sugar.” Next, the sling is modified in one of two ways. First, a souring agent is added, typically in the form of citrus. “We can describe this as a single serving punch or a sour,” McMillian points out. “Or, we add a bittering agent to it, creating a balance of bitter and sweet. You know, one of the oldest culinary balancing acts. This would be known as a bittered sling, otherwise known as the cocktail.” That is the historical definition of a cocktail. Nowadays the word “cocktail” means just about any mixed drink.

“Cocktails come in and out of fashion generationally. Whatever our parents did, we reject,” McMillian said when asked about cocktail trends. “You can track the popularity of cocktails based on the publication of cocktail books.”

When McMillian opened Revel, he created an original drink menu for the first time in his long career. “I’m a guy that might go a year without a new drink,” he said. “That’s not what’s important to me. For me, it started out with the idea that drinks are supposed to taste good. They didn’t. I looked at the classics because I made the assumption that they were classics because they were the best-tasting drinks. So I tried to learn to make those drinks.” McMillian’s current cocktail menu is an exploration of the classic cocktails.

Though he is a walking encyclopedia of drink knowledge, McMillian might be most famous for his mint julep. In addition to making a killer julep, he sometimes recites a piece of 19th-century literature written by Joshua Soule Smith that was dedicated to the mint julep. To watch McMillian recite this while crafting a mint julep is akin to admiring a piece of art. “It’s something I do if I have the time, if the moment’s right, and I think the person will appreciate and enjoy,” he said. “Sometimes you do it for the crowd. Sometimes you do it for just one person.”

That attention to the customer is important in McMillian’s line of work. “You have to establish a connection no matter who’s sitting on the other side (of the bar). People who are sitting at a bar versus sitting at a table want interaction.” It’s a fundamental skill of a good bartender, along with having the ability to multitask. In the greater sense, it can spell success or failure for a bar.

“Every restaurant you’ve ever been to, no matter how nice or modest it is, when you walk out of the door, you don’t take anything with you except your memory of what happened and how you felt about it.” McMillian continued, “When you step on the other side of the door, our goal is for you to think, ‘Didn’t we have a good time?’ or ‘Wasn’t that fun? Let’s come back and bring friends with us.’ If we’ve accomplished that, we’ve succeeded. Every one of these places, it’s all for that moment. If we don’t please you, we have no reason to be here and we fail.”

An hour and a half after walking into Revel, I walked away in awe of the stream of knowledge Chris McMillian has shared. If you’re even slightly curious about classic cocktails, do yourself a favor and visit Mr. McMillian at Revel or pick up his new book, Lift Your Spirits: A Celebratory History of Cocktail Culture in New Orleans, which was co-authored by My Rouses Magazine contributor Liz Williams. It is available at local bookstores and online.