At a lot of restaurants, “the chicken dish” roughly translates to “the safe bet. ” Among chefs, the chicken dish is usually considered the most boring entrée on the list. It’s considered a “safe choice” for less adventurous eaters or folks looking for an alternative to steak or a nice piece of fish. Approachable and nutritious, “the chicken” is often code for “uininteresing but necessary. ”

Not so at Emeril’s New Orleans in the city’s Warehouse District. Order “the chicken, I guess” at this revered room and you’ll get a double serving of fried bird that’s anything but boring. The innocently titled “Truffle Fried Chicken for Two” hits the table in a tightly packed tower loaded with complex flavors and a touching homage to homegrown Louisiana food traditions.

The double-decker entrée is basically the glorious love child of fried chicken and a backyard crawfish boil. Amazingly tender pieces of fried chicken with shatter-crisp crust are gently stacked atop a bed of familiar springtime staples — half a pound of spicy crawfish, yellow corn, fingerling potatoes and andouille chunks — boiled to perfection. The whole glorious mound is drizzled with a fragrant Crystal-fortified butter sauce and topped with wispy-thin pickled pepper slices and a scattering of fresh parsley. A few crustaceans climbing the platter make the whole thing look like a Technicolor version of the “crawfish house” so common in South Louisiana. 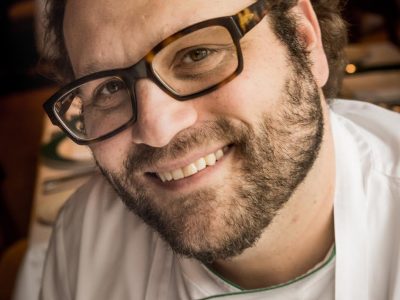 “About three years ago, we were looking for a way to serve a great family-style dish, ” says David Slater, the Toronto-raised chef de cuisine who currently runs the flagship of Emeril’s empire. “Something people would share and maybe eat with their hands.”

The original version was envisioned as a picnic-style presentation, with sides like cane-syrup baked beans, a nice coleslaw and a generous hunk of cornbread. But once springtime rolled around, Slater decided to turn the popular dish into an homage to crawfish season — with all the traditional trimmings.

So he and his staff decided to combine these two classic dishes and refine them for a decidedly fancy presentation.

“Preparing the chicken itself is a 3-day process,” Slater says with a smile. Whole birds are infused with an Italian truffle-scented mushroom paste (“Not enough to overwhelm the chicken flavor”) and marinated with garlic and thyme, then slow-cooked in a gently heated water bath (the sous vide method). The sous vide cooks the chicken to melting tenderness, and the final frying crisps up the skin and crust. The result is a rich, borderline-decadent poultry dish cleverly disguised as a Sunday supper staple.

Slater also incorporates contrasting flavors into the dish — a splash of pepper juice on top, a little bowl of tangy pepper-jelly sauce on the side for dipping — taken from sweet & sour memories of Cantonese dishes in his native Toronto. The spicy boiled vegetables change with the season, and once the crawfish disappear from the market, it’s back to the more traditional picnic-style presentation.

“We sell a lot of these, maybe 20 or 30 a night,” says Slater. “People come in and order the whole thing for themselves, just so they’ll have leftovers for breakfast the next day. We’ll box up what’s left and it fits in a little hotel fridge. Then next morning, when they wake up, they’ve got this cold fried chicken, and that’s a whole different set of flavors.”

And when a few boiled crawfish become a spicy breakfast bonus, what could be better than that?