People have different relationships with particular beverages, especially hot caffeinated ones. Some have a precise ritual that they cleave to with the utmost fidelity. We must have our coffee (or tea). It must be black (or awash with half-and-half). It must be prepared first thing in the morning (or late afternoon). To those who are monogamous in beverage devotion, deviation is as disturbing as if the sun started to rise, changed its mind, and went back down again, sinking in the east at about, say, 9:00 a.m.

Others play more loosely with liquid loyalties. I am in this second category. To call us fickle would be unkind; we are flexible, spontaneous. What we want to drink varies by circumstance. I respect daily beverage rituals (I keep a Chemex® for my boyfriend’s must-have morning coffee), but do not share them.

“Breaking bread” is shorthand for something more intimate than a meeting. But thirst is even more urgent than sustenance.

Here are two stories of thirst-quenching in countries where I was a guest, and one at home, where I provided the hospitality. And a slightly surprising recipe that has, over the years, pleased and hydrated many.

Café au Lait in a Suburb of Paris

For two weeks in 1991, I lived in a tiny, noisy apartment above an unpretentious bar-café just outside of Paris. I’d come downstairs every morning, walk down the street to the newsstand to get a Herald-Tribune (ever the friend of American ex-pats, the Herald-Tribune met its demise, sadly, in 2014) and sit at the bar. The laconic — one might say gruff — owner, who was usually in the back, would emerge to bring me café au lait, in a large bowl, and a croissant. I had the place to myself, just me and the Trib. Other customers arrived at noon and stayed, growing in number until the wee hours.

The air, in both my apartment and the café, was fumed with coffee, sometimes simmering chicken, but mostly smoke. The place was permeated with decades of Gitanes.

It happened that in the middle of those two weeks, a national ban on smoking in restaurants was instituted. By and large, the French were outraged. (Many were devoted smokers; most were notably anti-authoritarian: As De Gaulle once famously remarked, “How can you govern a country which has 246 varieties of cheese?”)

With an exaggerated, what-can-you-do shrug, the owner put up a sign — hand-lettered, on cardboard — that said, “Défense de Fumer.”

One morning, a day later, another customer walked in; a woman, much better dressed than I was, in heels and a suit. She asked me where the owner was; I replied, in my rudimentary French, that he was à l’arrière and would return shortly. She sat at the bar, a couple of seats away from me, drumming her fingers restlessly.

Then she noticed the new sign above the bar and expelled her breath sharply.

She then dragged the barstool behind the counter, climbed atop it (heels and all), reached above the bottles of liquor, and pulled the sign down. She didn’t even wait until she was back on the floor to decisively rip it in half. She climbed down, walked to the trash can behind the bar, dropped in the halves of the destroyed sign, returned to the barstool, and sat back down, giving me a triumphant nod —which I interpreted as, “So there.”

Then she lit a Gitane.

The owner reappeared, glanced at the cigarette being smoked by his new customer, glanced up at where his sign had been, gave his own miniature double-take, and shrugged.

The woman ordered a café au lait too.

To this day, when I order one — now Italian/Starbucks as latte — I hear the decisive rip of cardboard.

If I wanted to walk the crowded streets of that busy South Indian city and not be stared at back in the days before tech, call centers and lots of international travel, I wore a sari and carried an umbrella — not because it was raining, but to protect my skin from the fierce sun, as many natives did. Except, in my case, I was also protected from second glances; my foreignness invariably surprised the locals.

Trivandrum is surrounded by tea plantations; tea was and is important to the economy. I was there only a couple of days; naturally I went exploring, looking for a tea shop. I found one that was primarily a wholesaler, with countless burlap-wrapped bales of tea stacked in front and behind it. Still, there was a small room with one table and a few chairs. I sat, closing the umbrella, revealing my white-skinned, blue-eyed, redheaded self.

The waiter, a young man, was polite, but like everyone else, he stared; not in an unfriendly but a curious way. He came to take my order. Tea, of course, Indian-style: scalding hot, very strong, milky, sweet. (Not spiced, like the now-ubiquitous “chai”; “chai” was simply hot milky sweet tea. If you wanted it with cardamom, ginger and black pepper, you ordered “masala chai”).

The waiter brought back that invigorating cup (why does no place in the world but India get tea hot enough?). He lingered.

“Where you are from?” he asked.

“Last year someone from America is coming here!” he told me. “She is from Cal-i-fornia.” Then he gave a fond sigh.

“Su-san,” he explained. He looked at me hopefully.

Surely he was aware that the odds of Susan and I being acquaintances were slim. And yet two unaccompanied white American women had both wondered into his tea stall. So, it could have been possible.

Because, as travel — and for that matter life — teaches you, anything is.

A Southern Sip for Sultry Days

As I’ve mentioned elsewhere in this magazine, I once owned an inn in Arkansas. The town in which it was located was not near anywhere. Guests drove in, usually arriving in late afternoon. My late husband and I caught on quickly to the fact that most of them arrived dehydrated. Too, the town’s charm lay in its disorienting out-of-time flavor; it was quite possible to get lost, literally or metaphorically.

Our M.O. became to get guests to their rooms as quickly as possible, where refreshments (beverages and cookies) awaited them. Then, reinvigorated, they could come find us at the front desk.

We offered hot apple cider in cold weather. But what should the hot weather beverage be?

As we knew from serving breakfast and dinner, most wanted hot, high-octane coffee in the morning and decaf at night. That left out conventional caffeinated iced tea — sweetened or otherwise. And speaking of sweetness: We wanted something that wasn’t sugary. That left out lemonade.

Made with tart hibiscus plus rose hips (easily found in Red Zinger® type teas), it was sweetened with thawed frozen apple juice concentrate and a little fresh-squeezed orange juice. Plus, it was lovely: Hibiscus tea is bright red — as red as the liquid for hummingbird feeders. We decanted it into quart mason jars, garnished with citrus slices and fresh mint.

“You’ll find a nice pitcher of Iced Herbal Cooler in the mini-fridge, to go with your cookies,” I’d say. I tried for a welcoming, “There, there” tone, sympathetic and comforting; I had, in other places, been a stranger, thirsty, hungry, desperate to pee.

I did have one tired guest look at me, startled. “Did you say,” she asked me, “Iced Gerbil Cooler?”

Well. Our Iced Herbal Cooler (absolutely gerbil-free) was so well-loved we eventually made a postcard of it, with the recipe on the back. Here it is. 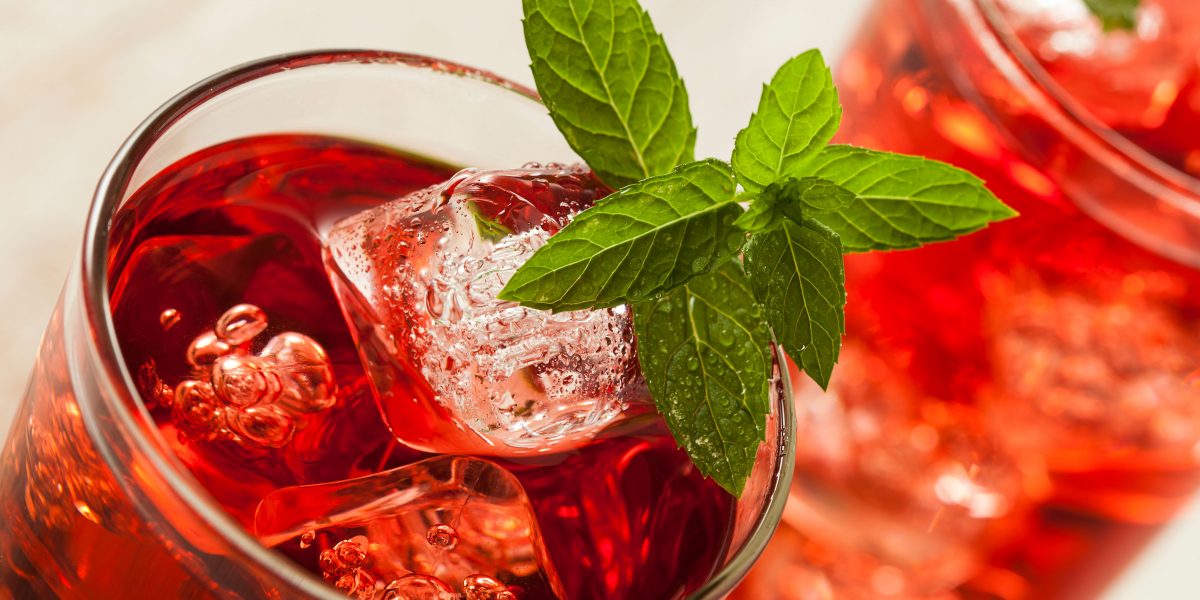