In a country, and world, that seems to grow ever more contentious and us-versus-them, is there no common ground? No place in which we can all rest?

I know. I spent six years writing a book about cornbread. When I answered the question, “What are you working on?” the response was instant. “Cornbread? I love cornbread!” It was not only the words that were near-universal, it was the tone: delighted surprise, as if reminded of a pure pleasure rarely thought of, almost forgotten, yet greeted as an old, dear friend.

So, yes. Cornbread is a meeting place.

That’s why all of us should have a good cornbread recipe. It’s so very simple to make. Given this, and given the near-universal happiness it gives, why would you deny yourself that rarest of pleasures, delighting others?

Because cornbread is also a place of dissent.

Not everybody loves the same kind of cornbread. Sugar, or not? Bacon fat, or butter? Yellow cornmeal, or white? Universal agreement on what makes cornbread love-worthy does not exist. Disagreement about cornbread, like so much, is just as common as love for it.

Most professed cornbread lovers have a cornbread that is to them the one and only good, real, true, authentic version, against which all others are sham. “If God had meant cornbread to have sugar in it, He’d have called it cake,” cookbook author/culinary memoirist Ronni Lundy said tartly. She’s been saying so for decades (since the 1980s, when she first wrote about the subject for Esquire). The author of the recently published Victuals: An Appalachian Journey, with Recipes, Lundy is the latest in a long line of those throwing down the cornbread gauntlet, a lineage that includes Benjamin Franklin, Thomas Jefferson, Frederick Douglass and Mark Twain.

Like many other my-way-is-best beliefs, cornbread loyalties often lie in our childhoods, the region where we spent them, and our race. Mostly, the cornbread we grew up with is the one to which we give allegiance and love.

Our rationales follow. Lundy recently told the Charlotte Observer, “… we don’t put sugar or flour in our cornbread in the mountain South … those were things we’d have to buy … be beholdened to someone for. Your daily bread was things you could grow yourself … the bread of my … forebears resonates for me culturally as an act of independence … an individual’s ability to feed him or herself.”

One cannot help but admire this line of thinking and self-sufficiency; yet Lundy’s skillet-baked cornbread contains baking soda, presumably purchased. The truly self-reliant cornbreads came earlier. Most of today’s eaters would not recognize them as cornbread: these breadstuffs were unleavened cakes of cornmeal, water, and salt — no milk, buttermilk, eggs. (These were often called hoecakes or ashcakes, because they were baked on the side of a hoe over the fire, or in the ashes themselves).

When such cakes were made from the finely ground cornmeal possible only when the corn to be ground had been alkalized (as Native Americans did, using ground clamshells, ash, or chamisa bush, among many other pH-altering agents), they were … tortillas. (Since the Native Americans were here first, and corn is the Americas’ native grain, I think that truly, if we’re talking real cornbread, it’s the tortilla … but these are fightin’ words to many.)

Lundy’s version is the standard-bearer of the white South. Here are some oversimplified generalizations describing the three main American skeins of cornbread:

In the face of such loyalties, with so many authentic, beloved recipes and related family stories, what was I, the author of a book whose single subject was cornbread, to do? Especially when I took delight in almost every recipe, including those which contradicted each other?

What I did was title my book The Cornbread Gospels. “Gospels” with an s; plural, not singular. If there are many mansions in my father’s house, why should there not be many cornbreads in my mother’s kitchen?

Each cornbread has its own flavor and texture, its own story and ethnicity, its own ideal go-withs. Cornbreads like Lundy’s — pure, satisfying, but on the dry side — could not be better when accompanying a nice soupy bowl of beans, or even crumbled into the beans. It’s also perfect used in that old Southern delicacy, incomprehensible to those who have not eaten it, but addictive to those who have, crumbled into buttermilk and eaten with a spoon (on the culinary continuum of cereal and milk, or yogurt and granola — grain and dairy, consumed together).

Flour-containing cornbreads would turn to mush if used thus. But when you want a tenderer, more moist, less austere cornbread, one that will serve as a beloved go-with to almost any meal and is delicious served on its own, I bow to the African-American style cornbreads.

The recipe that follows is a variation of the one that began my cornbread journey. It was made by a black woman named Viola, a Georgia native, our neighbor. I was in my teens, living in Brooklyn, New York, and Viola’s cornbread astounded me. It was part of a goodbye dinner she made for us, a few nights before my then-husband and I moved to the South. There, eventually, in the tiny Ozark mountain town of Eureka Springs, Arkansas, I owned and ran a country inn and restaurant called Dairy Hollow House for many years.

My version of the recipe Viola gave me, the first I’d ever had that was baked in a buttery hot skillet (which adds the incomparable crispness on the bottom and sides), was, as I used to say, “the sun around which the other planets on the menu revolved.”

It is not overstating it to say that that move — from Brooklyn to the South — and this cornbread both changed my life.

Crescent Dragonwagon — yes, that’s her real name — is a James Beard award-winning culinary writer and cookbook author. She has also written 28 children’s books. This is her first contribution to our magazine. 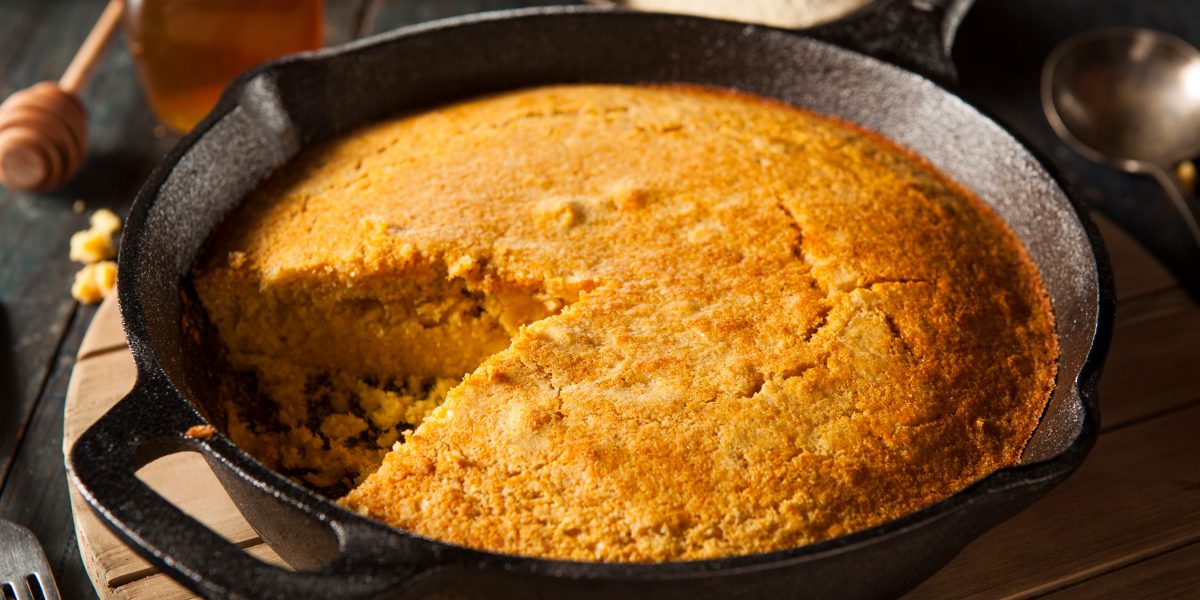