The Irish actress Fionnula Flanagan was telling us about a dinner she had hosted at which my father had been present, four days before his unexpected death. “Well, you know how he was,” she said. “I served a chocolate cake, and he loved it. ‘Well, then, Maurice,’ I said, ‘Why don’t you just take the rest of it with you?’ ‘Oh, Fionnula, no! I couldn’t! Really? The whole thing?’ ‘Of course the whole thing,’ I said. You’d think I’d given him diamonds.”

My husband and I exchanged looks. Across the surreality of it all, at least one minor mystery was solved: that empty wooden cake box, the name of its high-end bakery painted in gold leaf atop it — what, we’d wondered, was it doing sitting near the front door of my father’s Los Angeles apartment?  Larger mysteries remained, as they always do with an unexpected death. We had tried to unravel them, though we’d not yet fully comprehended the basics: My 77-year-old father’s heart had abruptly stopped beating. His sudden death upended normality. Ned and I flew in from the middle of the country, arranging his memorial and clearing out his apartment. The week we did that we somehow ended up (I have no memory of how) as houseguests of kind Fionnula, whom we’d never met before this turn of events.

Besides being my much-loved father, Maurice Zolotow was a show-business biographer. We knew him precisely as Fionnula described him: the life of the party as always, at what turned out to be the last party of his life. So large were his enthusiasms, so deep his engagement, so limitless both his own stories and his interest in other people’s stories, so bracing his laugh, so eccentric his theories (at least some of them), that he gave off a kind of crackle. His exuberance was, perhaps, just this side of crazy, but whether you were his friend, colleague, subject or daughter, you could not help but be charmed and intoxicated.

I could, and someday probably will, write a full-length memoir about Maurice (who, among other things, was Marilyn Monroe’s first biographer). But for the purposes of this story and recipe (my Guinness Extra Stout Chocolate Layer Cake), you need only know the following about my father:

And, for the purposes of this story, you need only know the following about me:

Overlay these two sets of facts, and you can well imagine that my father loved coming to visit us in Arkansas, staying at the inn and eating at its restaurant. His favorite dessert was a densely chocolate-y bread pudding, served dolloped with softly whipped, barely sweetened cream and a squiggle of raspberry sauce.

The night I first brought it out to him from the kitchen, he removed his glasses so he could examine it closely. Then he plunged his spoon into it and placed it into his mouth. His eyes closed in bliss as he rolled its velvety custard on his tongue. He swallowed. He opened his eyes, said, “Wow,” and took a second bite. After that, glasses still off, he gazed up at me from the banquette, his pale blue eyes large. “Cres,” he said sincerely, “On a scale of one to 10, I give this a 10,000.”

When Ned and I got back from Los Angeles, we returned to our then lives as innkeepers/restaurateurs. I renamed the dessert “Chocolate Bread Pudding Maurice.” The squiggle of raspberry became an “MZ,” piped on quickly, valentine red on the white plate, the scoop of bread pudding, whipped cream, a few fresh berries, a sprig of mint, across from the “MZ.” As the waiters would peel in and out of the kitchen, they’d call out their dessert orders. “I need a Maurice!” “Three Maurices!” Sometimes, hearing his name in this new-old context made me cry, sometimes smile.

During this same period, I listened to 28 cassette tapes of various Alcoholics Anonymous talks my father had given. He spoke about how drinking was associated, in his early years, with the mythology of writing; about Hemingway, Fitzgerald, Faulkner and, inevitably, Joyce. “On my first trip to Dublin, I couldn’t wait to have a Guinness. That was what James Joyce drank,” he said in one talk. The night he arrived, he’d left his hotel, gone to the nearest pub, and eagerly ordered one. “It was bitter,” he said, his voice on the tape with the same old crackle, though he himself had vanished from this world. “And at room temperature. I said to the bartender, ‘It’s bitter!’ and he said, ‘Sure, and it’s supposed to be.’” Maurice spoke about how he thought at first he’d been too good for AA. “At one meeting I mentioned James Joyce. Someone came up to me after the meeting and said, ‘Yeah, Jimmy Joyce, I know him, lives in the Valley, works a good program!’ Can you imagine? I was a terrible snob … Yet through this same program I met someone who introduced me to Fionnula Flanagan, the actress who played Joyce’s wife in his work Women! So that shows you what I knew.”

Time flew by, as in the old black-and-white movie convention of calendar pages blowing away. My father died (20 years sober) in 1991. In 1998, we closed the inn and restaurant. In 2000, Ned, my husband, also died unexpectedly. I continued to live and love, cook and eat, with an ever-growing sense of appreciating the moment you had and the people you were with. I do so to this day.

In 2009, while working on an article about St. Patrick’s Day and wanting to think outside the corned-beef-and-cabbage, green-food-coloring box, and thinking also of Maurice and his love of both the Irish and chocolate, I began contemplating a chocolate cake, in which the bitterness that is part of chocolate’s unique seduction was heightened by the use of Guinness in the batter. After several tries and the addition of currants (a fruit much loved and used in Irish baking), I came up with this one, easily one of the best desserts — dense yet delicate, moist and melting — I have ever developed or made, and over which everyone I’ve ever served it to has swooned. Oh, how I wish I could serve it to Maurice! (For him, I would have boiled the Guinness first, to evaporate the alcohol.) But I can do so only in dreams, in my imagination — though knowing, through the bread pudding and that cake box, how much he would have appreciated it.  “Fionnula,” I told her back in 1991, “We found the box from that cake you sent him home with. There wasn’t a crumb left.” 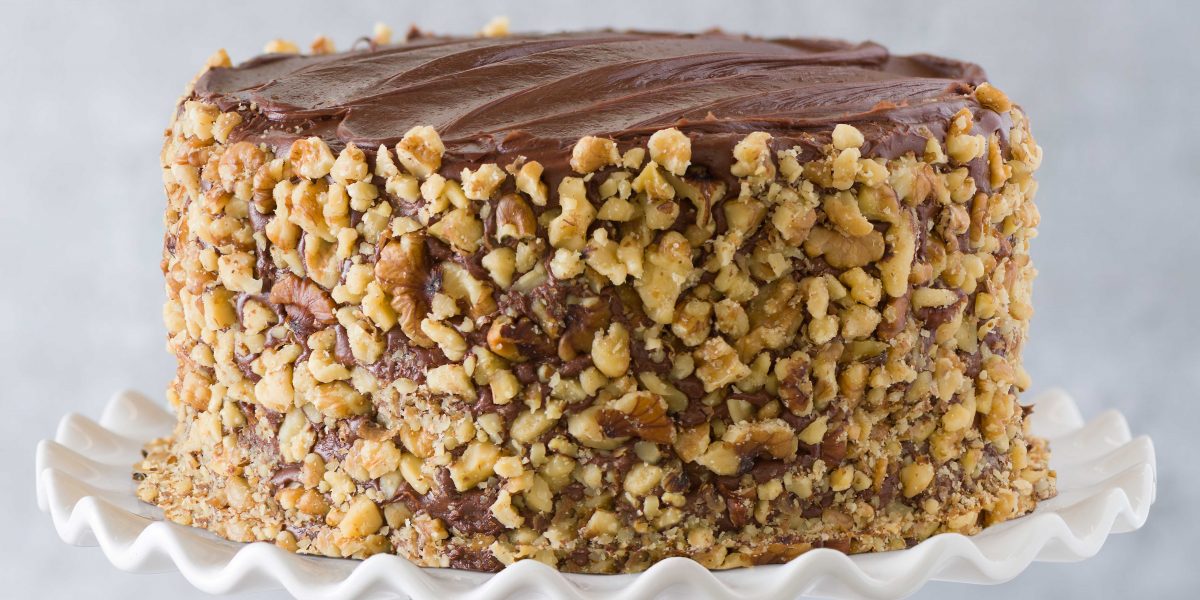