Campionship Barbecue at Mississippi's THE SHED

Every year as springtime rolls around, the barbecue world turns its eyes to western West Tennessee for one of the country’s biggest competitions — Memphis in May.

On the third weekend in May, ambitious pit masters and barbecue teams head to Tom Lee Park for a massive celebration of meat, music and the chance to be this year’s world champion. Now in its 40th year, Memphis in May ranks as one of the barbecue circuit’s crown jewels.

Brad Orrison, an owner at The Shed in Ocean Springs, Mississippi, knows Memphis in May well — as a fan, competitor and champion. His team from the ramshackle “Barbeque & Blues Joint” on the Mississippi Gulf Coast compete every year with plenty of success and “run the table” aspirations.

“We’ve won Whole Hog twice, and took the Grand Championship in 2015,” he notes. The Shed’s team has also placed first in every pork category. “We’ve also won beef and poultry categories. But we want to be the first team in the history of Memphis in May to win every category.”

The Super Bowl of Swine features nearly 250 teams from across America and several different countries. The competition takes place in a mile-long tent city at Tom Lee Park on the banks of the Mississippi River. Over the course of three days, more than 100,000 fans attend, smell the smoke, and watch the nation’s barbecue legends practice their craft.

The competition features two rounds of judging: blind and on-site. The Shed’s booth, The Rolling Joint, is a judge’s favorite. It features a 1954 Jeep tricked out as a smoker, and the Robo Hog, a vertical pig cooker.

Of course, winning is nice — and can be pretty lucrative at the championship level — but for Orrison, the best part of any cooking contest is mixing and mingling with fellow competitors and other pork geeks: “Memphis in May is an epic party.” There’s a lot of drinking, a lot of schmoozing, and a lot of oohing and aahing over Webers and Fatboys.

Talk to any seasoned barbecue, and you’ll pick up plenty of tips to up your personal pork-smoking game. Talk with Orrison — who calls himself the “Head ShedHed” and leader of his joint’s loyal fan base — and you’ll learn to never put cold meat in a smoker, stay away from green or damp woods and, most important, layer your rub to build complex, savory flavors.

“The salt goes on the meat first, because that’s your base,” said Orrison. “Then you add the heat — cayenne pepper, chili powder and turmeric. Then you come back later in the cooking process with a mix of sweet and savory — usually brown sugar and celery seed. This way, when you bite into the meat you get sweet and savory, then spice.”

Orrison’s best tip? Get a meat thermometer. As you learn your way around the complex world of mixing meat and fire, a thermometer will be your best friend. Whether you’re cooking a 10-pound brisket or grilling chicken breasts, reading the numbers will get you closer to perfect meat than just “eyeballing it.”

The Shed’s competition team of 15 regulars includes his sister Brooke Lewis (the Princess of Pork), other family members (Mama Shed, Poppa Shed and Daddy O), Hobson Cherry (senior pit master), and Mr. Jim (the restaurant’s first customer and team’s Official Beer Drinker). Over the years, The Shed’s ragtag crew have racked up over 140 awards in just over a decade on the competitive circuit.

Back in Ocean Springs, the group works and plays together. Brad and sister Brooke built the original Shed location — a 300-foot structure made out scrap metal, lumber and “collectible junk” Orrison had collected over the years — which lasted until a fire destroyed it in 2012. Four months later they’d rebuilt and reopened, bigger and better, in a new space with a treasure trove of junk from every corner of the Earth, much of it donated by loyal ShedHeds. 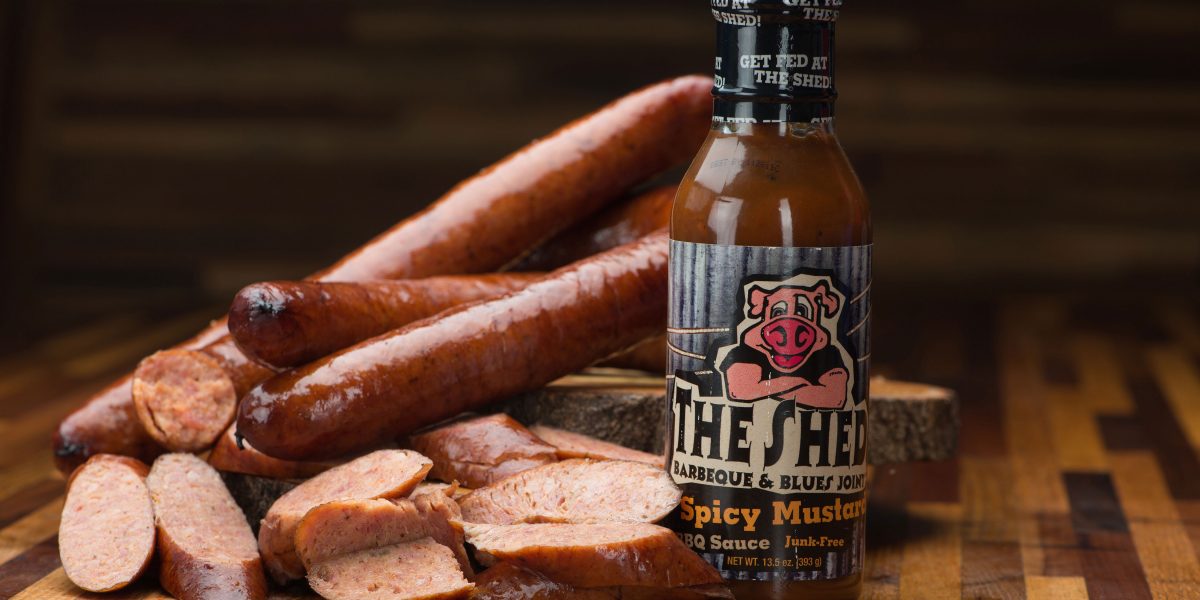 Get Fed at the Shed

Die-hard smoked meat fans from all over the Gulf Coast — these ShedHeads — hit the restaurant for slabs of ribs, chicken wangs, G-maw’s Famous Beans, Daddy O’s Creamy Cole Slaw and Momma Mia’s Mac Salad. Whole hog barbecue — a restaurant specialty — is always on the menu, and the other kind of H.O.G.s — the two-wheeled, gas-burning variety — are often in the parking lot. The Shed’s location — just a short hop off Interstate 10 — makes it popular with the motorcycle folks.
“The restaurant is just off the beaten path, so we’re an easy ride from anywhere,” says Orrison. “If you leave Baton Rouge on your Harley at 8 a.m., it’s a 3-hour trip; you’ll be there when we open.”

When it comes to meat (the most important part of a barbecue joint) it’s pretty tough to go wrong. The brisket is smoked for 14 hours on pecan wood, which is native to the South. The coarse-ground sausage they use comes from Country Pleasin’ in Florence, Mississippi. “We cook the sausage over medium heat in a hot smoker with coals made out of sharp wood like oak or cherry. When it hits a temperature of 165, we’ll take it out, slice it flat like it’s going on a po-boy, add sauce or seasoning, then put it back so it caramelizes down.”

Baby back ribs are cooked for five to six hours, spare ribs for four hours. Both racks are done at 250 degrees (about 25 degrees hotter than normal home smoking temperatures). “That temperature works at the restaurant if we need to add chicken or sausage to the pit.”

You want to test the skill of a pit master? Taste the barbecue without the sauce first. But if you pass on the sauce at The Shed, you’ll be missing out. Orrison’s sauces have won 98 different national awards and range from Original Southern Sweet and Spicy Sweet to Spicy Mustard and Spicy Vinegar. (All are available on the shelves at Rouses, along with the marinades for beef, pork and poultry, a Cluckin’ Awesome Poultry Rub and Rack Attack Rib Rub.)

Orrison has one more tip. “I’m not gonna lie — if you get pork loin or pork chop at Rouses, marinate it in our pork marinade, and grill it or reverse-sear it, it’s gonna be great. Then if you go one step further and sandwich with Rouses garlic bread, and add some onions with butter and bacon crumbles, some sort of spicy mayonnaise, God forbid a hot pickle … aw man, that’s good. I want one right now.”