Going to the Chapel

Music is elemental to the rites of matrimony. Songs of love and hope make the newlyweds swoon, and charge the family and guests at receptions to kick up their heels in breaks from the feasting and toasting to the bride and groom and their life ahead.

Weddings make musicians happy, if not so much for vicarious memories of their own cake-cutting day long past as for the economics: Receptions that really rock are high-dollar jobs compared to nightclub or festival gigs.

Deacon John Moore, the effervescent 70-something New Orleans bandleader, was playing weddings before America put men on the moon (1969.) A few thousand weddings later, some of his clients are the grandchildren of couples at whose weddings he once played.

“The songs people love for weddings have changed some,” says Deacon John philosophically. “When I first got married in the 1960s, I sang ‘All These Things’ for my bride” — the Allen Toussaint composition that Art Neville’s vocals made popular. “I was in the studio when Art sang it in 1962. I played it at a wedding a few weeks ago.”

What are the most-requested songs?

“Number one is ‘At Last,’” reports Deacon. “The version sung by Etta James.”

As often happens in the evolution of a given song’s popularity, soul singer Etta James came late to it. Written in 1941 by Mack Gordon and Harry Warren, “At Last” was popularized by Glenn Miller’s big band, and then in 1960, James recorded it on her debut album, probably the most popular set of lyrics the blues diva put on wax:

At last my love has come along

My lonely days are over and life is like a song, oh yeah

At last the skies above are blue

I found a dream that I could speak to

A dream that I can call my own

I found a thrill to press my cheek to…

Jimmy Maxwell, the namesake leader of the orchestra he launched in 1981, is a mainstay of Mardi Gras balls and by his own “conservative estimate” has played “well in excess of a thousand weddings.” Maxwell, too, finds “At Last” to be the most-requested song.

“The bride chooses the first song,” says Maxwell. “The song is human nature-driven, emotionally and psychologically — that tempo, those lyrics put the bride in a special place.”

But descending from the pinnacle of Etta James’s pipes on “At Last,” the most-requested song tier diverges between Maxwell and Deacon John.

Keep that breathless charm.
Won’t you please arrange it?
’Cause I love you
Just the way you look tonight.

Where Deacon John and the Ivories captured a corner of the wedding market as the premier rhythm-and-blues cover band in New Orleans, the Jimmy Maxwell Orchestra traveled the South in the 1990s, playing “older, more moneyed weddings,” says Maxwell. “Atlanta’s Piedmont Driving Club, country clubs in Houston, Dallas, the Florida Panhandle. We might have peaked in the late ’90s, playing 200 a year. Things shifted after 9/11. If we do 50 in a year now, that’s a lot.”

That’s still around a wedding a week, with a dozen musicians and attendant travel costs.

“Time marches on,” says Maxwell. “A prophet is not guaranteed honor in his own town unless you work at reviving and remarketing. My dad was once the drummer in my band. He’ll be 90 in January. I live next door to him. My son Robert Maxwell is the drummer now. I am not quite retired. We work with an incredible singer, Mark Monistere — the kid sounds like Harry Connick Jr. — and he can do a lot of pop rock. Robert and Mark are carrying us into the 21st century.”

The third most popular song for Maxwell is the Harry Connick Jr. version of “It Had to Be You,” and at four, the soul crooner Al Green with that ineffable falsetto on “Let’s Stay Together.”

Deacon John counters with his most popular list, which descends to the Carpenters’ “We’ve Only Just Begun” and Percy Sledge singing “When A Man Loves A Woman.”

“I’m a chameleon of sorts,” says Deacon John. “I can blend in with the woodwork. People have flown me and the band out to California and up to New York to play weddings. I save all the thank-you letters. I’ve had families that had three daughters, and they called me back to play each one’s wedding.

“I have played for Jewish, Greek, Latino and African American weddings,” says the Deacon, smiling like a candidate warming to his stump speech.

His most memorable gig on the wedding circuit was in 1989, when the actor John Goodman married Anna Elizabeth (Annabeth) Hartzog, a UNO graduate he met in 1987 while filming Everybody’s All American 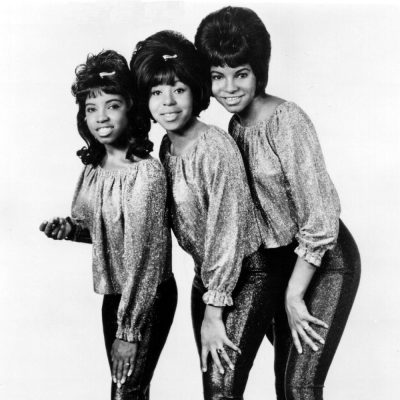 The Dixie Cups hit the top of the charts in 1964 with “Chapel of Love.” Photo from AllMusic.

“Goodman was such a nice guy, and he loves New Orleans culture and music; he married a girl from Bogalusa and pulled out all the stops. Chef Paul Prudhomme was there in person. Great food. We were on a riverboat. Aaron Neville sang ‘Ave Maria’ in the church, and he sang at the reception. Goodman had the Dixie Cups. They sang ‘Chapel of Love.’ Bruce Willis, one of his friends, jammed with my band. I didn’t know he could play the harmonica; he did a few blues songs. Roseanne Barr was there with her [former] husband Tom Arnold. Jesse Hill sang ‘Ooh Poo Pah Doo’ and Oliver Morgan did ‘Who Shot the LaLa.’ It was a star-studded party.”

Maxwell has seen some weddings with made-for-movie moments. Over-the-top encounters one does not expect at nuptial celebrations.

“I remember one bride — she was quite uncomfortable in her wedding dress, and she started taking it off. The crowd was jumping up and down, yelling. She stripped! The song? It could have been ‘I Feel Good’ by James Brown. The guy she married was this Marine, a muscular guy like you couldn’t believe — he could have been on the defensive line for the Saints. And he’s standing there, cheering and egging her on!”

Wedding gigs have been more wholesome for the Cajun chanteuse Yvette Landry. A schoolteacher in Breaux Bridge, Landry got her launch as a guitarist and country-and-western singer in 2010. The first invitation to play a wedding left her a bit wary. Her repertoire ran heavy on lyrics of heartbreak and loss, not the romantic wellsprings of Sinatra or the Carpenters. “A song like ‘Dead and Gone’ didn’t strike me as appropriate for a wedding,” recalls Landry. But the father of a former student was emphatic in asking her to play at the big event.

Music is an adventure, if nothing else. “I played accordion with a fiddler while the couple made their entrance,” says Landry. “We did some country love songs in the ceremony. And then some of my stuff for the reception.” The event at Cafe des Amis in Breaux Bridge went off without a hitch.

Landry actually does more funerals than weddings. “I think it’s the instrumentation we have with the steel guitar [played by Richard Comeaux]. Sacred steel is beautiful when you hear ‘Old Rugged Cross’ or ‘Amazing Grace.’ I’ve tended to write more songs about death than love.”

But on writing “Together Forever” she thought she was onto something, and wanted the option of lyrics in French. Landry called Barry Jean Ancelet, a prolific poet and scholar who helped with the translation. She did the song at a wedding for a couple in their mid-20s with grandparents from the generation that still speaks French. When the grandparents walked in, she sang the French verse.

And look me in the eye when I love you

Forever, together, I do

Together, forever, I love you

Landry has been elated by the response to the bilingual song. “Young kids in our area aren’t speaking French, and grandparents who had it as their first language are dying off,” she says. “The bride at that wedding didn’t realize how much it would touch those elders, and she was glad for what it brought to the wedding. I’ve recorded it in English, but not yet in French.”

Businesses that specialize in the planning of weddings are a booming industry in heavily populated areas, which augurs well for hotels, reception halls, caterers, musicians — and the airline industry, a pivotal link in the chain of destination weddings for which guests travel far and wide.

Even in an age when many couples make lives together while putting off the ceremony of commitment, often for many years, the river of life flows on with couples young and old taking the big step.

For a country club wedding at which Deacon John and the Ivories played, the groom was severely ill with the flu and barely able to stand. “He said ‘I do’ and passed out,” recalls Deacon John. “They carried him off to the hospital. The best man was the stand-in for the first dance with the bride. When she threw her bouquet it went into the chandelier; they had to get a ladder and bring it down so she could throw it again.”

Of that inauspicious ceremony, the bandleader chuckles. “You know, Woody Allen once said that marriage is the death of hope.” He paused. “And then Woody got married.”