A serious cook’s signature gumbo can be as unique as their thumbprint.

In mid-September of 2016, Disney posted a short cooking video featuring a healthy, vegetable-centric dish made with shrimp, okra, kale and quinoa (a trendy Peruvian grain) instead of rice. The “how to cook it” movie for “Tiana’s Healthy Gumbo” ran just under two minutes and featured a peppy Dixieland soundtrack from the studio’s 2009 movie The Princess and the Frog, a fairy tale adaptation set in the South Louisiana wetlands.

The whole thing seemed innocent enough, except for one critical misstep: They called the dish “gumbo.” Within minutes of the video’s Facebook debut, Louisiana cooks at home and abroad were heaping scorn on the dish, screaming about many aspects of the recipe that violated the Sacred Gumbo Code. The transgressions ranged from ingredient choice (kale? Crushed bay leaf? Chili powder?) to the thickening of it with a little bit of un-browned wheat flour.

A flood tide of humorous/furious comments made their way onto social media, accusing Disney of sin, sacrilege and downright desecration of a Gulf Coast classic. Self-identified Cajuns the world over registered their displeasure with parody memes, hand wringing and the invocation of long-passed ancestors. As modern Internet outrages go, it was quick and relatively painless. Media outlets picked up on the joke and wrote fluffy trend pieces on the Facebook fury brimming with mockery, humor and snark.

Within a couple of days, Disney pulled the recipe and video, handing a victory to the commenters and parodists. From their perspective, the barbarians had been beaten and our culinary culture preserved. Gumbogate brings up some important questions when it comes to one of our culinary cornerstones: What is the essence of gumbo? What does our gumbo say about Gulf Coast food culture? And who gets to enforce the traditional culinary boundaries? In short: What do we talk about when we talk about gumbo?

Along the food-crazy Gulf Coast, gumbo isn’t so much a dish as it is a culinary genre like stew or soup — a broad category that can include a wide range of core ingredients and cooking techniques. In the broadest sense, gumbo is a savory, thick-bodied middle ground between stew and soup — a hearty concoction, chunky with the bounty of barnyard, water and sky. We crave a steaming bowl when cool winds sweep down from the North, but there are summertime versions that contain the summer-peak crops as well (shrimp and okra to be precise). Our region’s gift to the global soup course, it’s usually served with a scoop or two of fluffy white rice and, in some Cajun households, a scoop of creamy potato salad or the occasional roasted sweet potato.

It’s common knowledge that every local cook has their own foolproof gumbo formula, or a handful of special occasion gumbos for holidays, hunting season or the time when Uncle Raymond takes out the trawling nets.

In the kitchen, gumbo can be a big-batch, freezer-friendly best friend that contains tasty multitudes. It can be a “make a pot of rice” last-minute meal or a self-contained holiday celebration. It can be a thin-bodied filé gumbo packed with shrimp and quartered crabs, or a complex roux-thickened duck gumbo with chunks of smoky andouille sausage in every spoonful.

But one thing it’s not (ironically) is “one thing.”

Part of the reason for gumbo’s wide range is its flexible structure, which allows the use of three thickeners (alone or in combination, depending on taste and tradition). 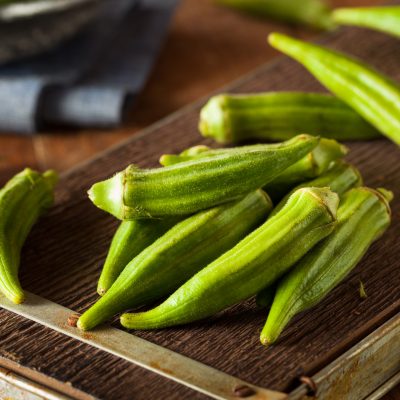 Okra: Foodies with a linguistic bent and time to argue will insist that a gumbo isn’t a gumbo without okra (stemming from the plant’s Old World Bantu root word quingombo). Most people have pronounced opinions about the often-gooey texture of this curvy, green podlike vegetable. (Technically, it’s called “mucilage,” but detractors and fans alike call it “slime.”) Love it or hate it, this African-born, Deep South-bred vegetable is the secret of many gumbos across the land-and-sea spectrum.

Roux: Many dishes, especially from South Louisiana’s Cajun tradition, start with this napalm-like paste of oil and toasted flour. This staple couldn’t get any simpler — equal parts wheat flour and vegetable oil cooked gradually until the flour turns brown. A slow, low flame toasts the flour particles as the mixture develops a deep, nutty flavor. Adapted from classical French technique, the Louisiana roux process often heads straight for the dark side of the spectrum — with tones described as peanut butter, medium brown, brick, chocolate and “almost black.”

And despite what you may have heard, roux preparation doesn’t require magic, intricate rituals or incantations to long-ignored kitchen gods. Just a cast-iron pot, a single stovetop burner and ample, spoon-turning patience.

Filé (or Filé Powder): Away from the Gulf, filé can be a culinary mystery. Most folks have heard Hank Williams Sr. sing about it, and they know it’s never too far from gumbo, but it’s not one of those products you routinely find on spice racks outside the region.

Filé is the dried leaf of the native sassafras tree, pounded into a fine powder. Native Americans used the pulverized leaves to thicken stews, a trick picked up by French and African cooks during the Colonial Era. The dusty green powder gives gumbo a distinctive herbal flavor and is usually stirred into the pot directly before serving or as a “sprinkle your own” table spice.

Combine the three thickeners with a tradition of natural bounty and you’ve got the possibility of a million different gumbos — maybe more. Cooks along the Gulf Coast might hold tight to the shrimp and okra version their grandmothers taught them during summer vacation, or to the pre-game chicken and sausage version their aunts used to make during college football season, but there are so many different styles in the region.

Our gumbos can reflect a wide variety of cultural influences and regional variations that we re-create on our stovetops. Some folks have fond memories of shrimp and sausage gumbo served in Iberia Parish grade-school cafeterias, crawfish-spiked gumbos from the Cajun Prairie and Atchafalaya Basin towns, or the fish-spiked seafood versions served around Mobile and Biloxi. Others yearn for Thanksgiving’s turkey-bone gumbo, made from post-feast leftovers, or for the comfort of an intricate New Orleans Creole gumbo that appears for formal holiday gatherings for families in the city’s Seventh Ward. (This special-occasion variation contains shrimp, crab, oyster, chicken wing, veal stew meat and two kinds of sausage — cooked low and slow with a roux/filé combination.)

A dedicated cook’s gumbo — even when it’s as unique as their thumbprint — tells a story with every pot, every bowl and every bite.

Which brings us back to the Disney debacle. The online backlash showed us an important truth about the cultural importance of the dish, the story and the interaction of the two. “Tiana’s Healthy Gumbo” (shudder) should be recognized for what it was — the work of some well-meaning nutritionist with decent intentions — rather than an aggressive act of cultural imperialism bent on undermining our culinary traditions.

The whole affair showed us how our regional cooks connect food and identity. And most important — how every bowl of gumbo is a chance to learn a different story, which keeps our vibrant food culture intact and thriving, one pot at a time.