He arrived at Ellis Island, New York, accompanied by his parents, Anthony and Marie, and an older brother. Joseph was barely a year old when he arrived in America.

The Rouses were part of the New Immigration of Italians. That period between the 1880s through the 1920s saw the arrival in America of more than four million mostly Southern Italian immigrants who’d left their homeland in search of work and a better life. Many arrived wide-eyed and anxious, having left family back in their Italian homeland.

The Port of New Orleans was a major gateway for Italian immigrants. Sicilians had been coming to New Orleans in significant numbers since the 1830s, and New Orleans was America’s second-biggest port for the Sicilian citrus fruit trade. Many immigrants were fruit traders who set up shop on Decatur Street, working as produce merchants and brokers. But the Sicilians and Sardinians, as well as other Southern Italians who arrived around the turn of the century, were not citrus traders; they were poor immigrants escaping not only abject poverty, but corruption and danger in a newly unified Italy. Some were financed by padrones (labor bosses) in Italy who served as middlemen for Southern plantation owners looking for inexpensive labor.

Nearly three-quarters of those who arrived during the New Immigration were farmers and laborers. Those whose passages to America were paid by padrones often went to work in the cane fields of South Louisiana.

Sugarcane was the main crop in Louisiana, but the lumber business was significant in areas like St. Tammany. And there was money in vegetables. Italian truck farms operated all over the West Bank of New Orleans, Harahan, Little Farms (now part of River Ridge) and St. Bernard Parish, growing herbs, beans, peas, tomatoes, zucchini, eggplant and cardoon, which are similar to artichokes. The produce was trucked to New Orleans public markets, where Italian farmers sold them wholesale.

Lauricella Family Farms and Picone Family Farms were two of the larger tracts in what is now Harahan. Kenner was mostly farmland. Produce grown in Kenner’s “Green Gold” fields was ferried to the French Market via the O-K Rail Line, an interurban streetcar line that ran between New Orleans and Kenner from 1915 to 1930. Many Italians settled in Kenner, buying land and raising families in the farming community on the outskirts of New Orleans. The city of Kenner still has a large Italian population and still celebrates St. Rosalie, the patron saint of Palermo, with a procession every September. During these years, a teenage J.P. Rouse got a job at a truck farm in Marrero raising potatoes and cabbages.

The railroads helped immigrants establish Italian communities all over the Gulf Coast. The New Orleans, Jackson and Great Northern Railroad went straight through Tangipahoa Parish, the heart of Louisiana’s strawberry industry. Newcomers settled in cities and towns like Ponchatoula, Independence, Amite and Hammond. By 1910, so many Sicilians inhabited Independence it became known as “Little Italy.” The name still resonates today — nearly one-third of Independence’s residents have Italian heritage.

There was other work to be had besides farming. Businesses placed ads in the New Orleans L’ltalo Americano seeking Southern Italian immigrant labor for the South’s coal and steel industries, railroads and plantations.

But for most immigrants, agriculture was the main attraction. One entrepreneur who capitalized on that was Alessandro Mastro-Valerio, who in 1888 established an agricultural colony on the Eastern Shore of Baldwin County, Alabama. Mastro-Valerio bought land in the area now known as Belforest. After subdividing the property, he went in search of would-be landowners, running ads in Northern newspapers to lure immigrants who came mainly from Central and Northern Italy via Ellis Island. Mastro-Valerio’s plan was a success. His agricultural roots run deep in Baldwin County at farms like A.A. Corte and Sons in Daphne.

Like farming, produce vending was a common livelihood for Italian immigrants who settled around the Gulf Coast. In 1923, having saved enough money working at the family truck farm in Marrero, J.P. Rouse and his wife, the former Leola Pitre, moved to Thibodaux, where he opened City Produce Company. He bought fruits and vegetables from big farms in nearby Chackbay and Choctaw, then trucked them to the public markets including the French Market.

Many budding Italian entrepreneurs had stalls at the French Market in New Orleans, where business was almost all wholesale. The Chisesi Brothers, now famous for their hams, started in the French Market selling live chickens from a basket. Other immigrants peddled food from horse-drawn carriages and later trucks. Each salesman traveled the same route each day, so people knew when and where to look for him.

The Dole Fruit Company traces its roots back to the early French Quarter fruit carts. The Vaccaro brothers, who peddled fruit, joined another immigrant family, the D’Antonis of Baton Rouge, to form the Standard Fruit & Steamship Company. They dominated the banana business and helped make New Orleans the world’s largest fruit importer in the early 19th century. Dole acquired 55% interest in the Standard Fruit & Steamship Company in 1964. It later acquired 100%.

Giuseppe Uddo, the founder of Progresso Foods, also started as a peddler, selling olives, cheeses and tomato paste in New Orleans, first from a horse-drawn carriage — his horse was named Sal — and later from a truck. Eventually Uddo purchased a small warehouse on Decatur Street. After World War I, Uddo bought a tomato paste factory owned by the Vaccaro brothers in Riverdale, California, and business expanded from there.

Many budding Italian entrepreneurs had stalls at the French Market where business was almost all wholesale. Chisesi Brothers, now famous for their hams, started in the French Market selling live chickens from a basket.

The Lower Quarter was also home to several macaroni manufacturing factories. In 1902, Giacomo “Jacob” Cusimano built the largest macaroni factory in the United States at the corner of Barracks and Chartres. The factory was capable of churning out 10,000 pounds of pasta a day. Cusimano’s pasta plant manager, Leon Tujague, was a founding partner in the Southern Macaroni Company, which created Luxury Brand pasta in 1914.

“Spaghetti houses” (red gravy restaurants), serving what today we call Creole Italian cuisine, rose to prominence on the restaurant scene in the French Quarter and beyond. But they were not confined to the French Quarter. Manale’s Restaurant, now known as Pascal’s Manale, opened in 1913 in a former corner grocery store at Napoleon Avenue and Dryades Street.

The grocery business proved popular with many first-generation and second-generation Italian Americans. Italian-owned corner groceries, dry goods stores and fruit markets proliferated in New Orleans — there were nearly 400 by the late 1930s. Beans, rice, flour and sugar were kept in large barrels and measured out for each customer. Almost all of the proprietors lived upstairs or in back of their stores.

The Solari family started with a small grocery on the corner of St. Louis and Royal Street in 1864, and new groceries sprung up to serve Sicilians working in the French Market and the enclave of immigrants in the lower French Quarter christened “Little Palermo.” Central Grocery and Progress Grocery both opened on Decatur Street. Biaggio Montalbano started a delicatessen and grocery on St. Philip Street around the corner. One of New Orleans’ longest-operating restaurants also began its life as a grocery store. Sebastian Mandina, a Sicilian immigrant from Palermo, opened Mandina’s in Mid City as a grocery store in 1898. The family lived upstairs. Mandina’s evolved into a pool hall and sandwich shop, then in 1932 it became a restaurant, which is still serving seafood and Creole Italian food today.

Italian-owned stores and markets also opened in Shreveport and Monroe, Louisiana, in the Mississippi Delta around Natchez and Greenville, and across the Gulf Coast in Biloxi, Gulfport and Ocean Springs, Mississippi. But outside of New Orleans, nowhere were Italian groceries as popular as Birmingham, Alabama.

By the mid-1930s, over 300 Italian-owned groceries were operating in the Birmingham area, which had the largest Italian population in the state. Italian immigrants, many from Bisacquino, a small Sicilian village near Palermo, were drawn to Birmingham’s coal and steel industries, railroads and plantations. They settled around Birmingham in the suburbs of Bessemer, Thomas and particularly in Ensley, Alabama’s own “Little Italy.” Joseph Bruno, whose parents were Sicilian immigrants, opened Bruno’s in Birmingham in 1932 during the Great Depression. At the height of its success, his company had more than 300 stores. 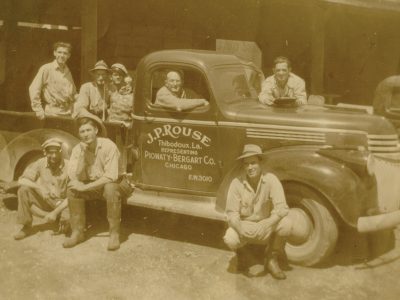 J.P. Rouse expanded his City Produce Company from serving public markets to shipping produce to stores and supermarkets all over the country. In addition to buying from local farmers, he also planted his own acres for cultivation.

His son, Anthony Rouse, Sr., and nephew, Ciro Di Marco, worked at the company’s packing shed in Thibodaux. When J.P. died in 1956, the two cousins took over. But the era of the truck farm was coming to an end. Trading on the tradition of quality established by the City Produce Company, they opened the family’s first grocery store, a modest, 7,000-square-foot store in Houma, Louisiana in 1960.

They didn’t have big wholesale suppliers like there are today. But the two men found ways to sell groceries cheaper. They made their own Cajun specialties and dried all of their own spices. The butcher cut meat to order. Farmers delivered their produce directly to the store, while Rouse’s young sons were sent to the local dairy to get milk for the store.

As supermarkets became more and more popular, and grocery stores began adding more fresh goods, Anthony J. Rouse, Sr. began yearning for a larger store where they could prepare food and have a full-service bakery and deli. Ciro Di Marco preferred to retire and sold his shares to his nephew, Donald. Rouses #1, a supermarket, opened in 1975. Family members helped the new partners — father and son Anthony J. Rouse, Sr. and Donald Rouse — operate both stores.

There have been many milestones since, including 44 more stores across the Gulf Coast. A third generation led by Donny Rouse is now managing the company. And a century after J.P. Rouse immigrated to America, his Italian heritage is still being honored on every aisle of every Rouses Market. You’ll find a taste of the family’s history in everything from the San Marzano tomatoes, “00” flour and balsamic creams, to the Pecorino Romano cheese from J.P. Rouse’s home of Sardinia.

From the September/October 2016 issue of My Rouses Everyday