The Gulf Coast can boast of countless festivals that celebrate music, food, culture and anything else that is deemed worthy of recognition.

One festival that has long interested me is the Jambalaya Festival celebrated in Gonzales, Louisiana. While the Jambalaya Festival Association was chartered in 1967, the first festival wasn’t held till the following year. It was 15 years or so after that that I had the honor of being on the panel of judges for the competition. I was surprised at the strict rules that are applied to the participating teams. For example, each team gets the same amount of rice and chicken, and has access only to other ingredients (such as onions, bell peppers, celery, red hot sauce, salt, red and black pepper, garlic, cooking oil) sanctioned by the Jambalaya Festival Association. No one can bring any other type of seasoning or “secret ingredient” to the competition. Participants must supply their own black iron pot with a lid, and a paddle with which to stir. The jambalaya must be cooked over a wood fire — and the wood has to be furnished by the festival association.

Having spent a good deal of time as a youngster at my father’s elbow while he cooked over a wood fire, I am always in awe of and have great admiration for cooks who can control wood fires.) I was also intrigued by the jambalaya itself. Although I have consumed several types of jambalaya in my lifetime, none resembled the ones served to me at the festival. They were brown — the only meat they contained was chicken. In my family circle of cooks, the characteristics of the jambalaya varied from cook to cook. A favorite family recipe contained chunks of pork, smoked sausage and chicken, and contained some (keyword here is “some”) tomato product, like diced tomatoes, which, in my opinion, added a depth of flavor. When our family spent a weekend at our camp at Cypremort Point on Vermilion Bay, the jambalaya of the day featured shrimp and ham, tasso or smoked sausage, and was tomato-based.

But that was my family.

In the book Stir the Pot: the History of Cajun Cuisine, I wrote quite a bit about jambalaya. Here are a few of my observations:

Just as everyone has their own variation of gumbo, so too will you find great variety among jambalaya recipes. Some will argue that jambalaya should be brown, while others will tell you no, it should be red (made so by the addition of tomatoes).

In Gonzales, for example, the locals will tell you that you will never find a good jambalaya in New Orleans because they make the red version. It is an article of faith with these folks that jambalaya should be, must be, brown. Gonzales must know what it’s talking about — after all, it was named by the Louisiana legislature to be the jambalaya capital of the world, and for over 30 years the town has hosted an annual cook-off whose winner is named World Jambalaya Cooking Champion.
But then again, there are zealous cooks who claim that the addition of tomatoes makes for a richer-tasting jambalaya.

Who’s right, who’s wrong? That depends. Let it be understood that there is one thing upon which Cajuns do agree when it comes to food, and that is, it must taste good. On that score, both brown and red are fine. Which you prefer is a matter for your own taste buds.

Just as there are arguments about the color of a good jambalaya, so are there discussions as to what ingredients should be included in the dish. There are those that say to use only ham and shrimp, while others argue, “Non, just shrimp.” And yet another says, “You have to put lots of chopped onions, bell peppers and celery,” only to have his cousin say, “Non, just a little.”

Then to really confuse the issue, there’s a difference of opinion about when to add the rice. The addition of raw rice to the pot, according to one school of thought, allows all the flavors of the ingredients to be absorbed together. The trick then is that there must be the right amount of liquid in proportion to the amount of rice to ensure that the rice doesn’t get gummy. The experts say that the rice must not clump together. Although it strikes fear in many hearts, there are some cooks who advocate cooking the rice separately and adding it to the pot of the cooked ingredients afterwards — just don’t tell anybody.

So who are you going to believe? The thing to do is to try it for yourself using whatever comes to mind, in whatever combination your taste buds tell you is right.

“The Creole name ‘jambalaya’ is derived from the French word for ham, “jambon,” and an African word for rice, ‘yaya.’ Yet, it is probable that Valencian paella is the forerunner of this classic Louisiana dish. Paella is made with a variety of ingredients including meat or seafood, white rice and white beans. Sound familiar? It’s easy to see why Louisianans usually top their meat-flavored jambalaya with a healthy ladle of creamy, white beans. The dish is truly a mélange of cultures.” 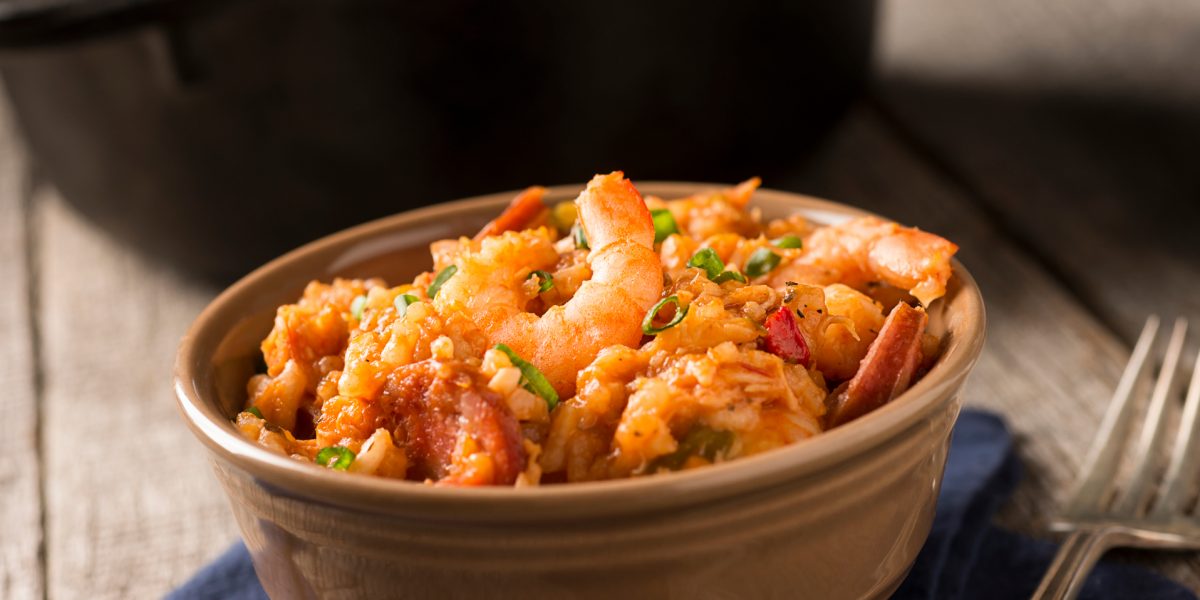