In any high-traffic kitchen, a cook’s favorite utensils not only get plenty of use over time, they might also get nicknames. You might reach for the “good cornbread skillet” that’s got 10 years of seasoning built up or the “pointy ladle” that hooks nicely on the “tall gumbo pot” so it doesn’t fall in. With these tools close at hand, a cook’s life goes a lot more smoothly and makes a kitchen feel like home.

Most of my “good tools” hang on my tiny kitchen’s pegboard wall — a “hook-and-holes” solution that gives my tiny cooking space 12 feet of accessible vertical storage. Go-to pans and gadgets — omelet pan, pasta strainers, pressure cooker — hang around shoulder height, so as not to require much of a reach. Lesser-used specialty items (jambalaya pan, Dutch oven) hang higher, and largely ceremonial pots cluster close to the ceiling, keeping sentimental watch over the whole room.

Hanging from the highest hook, “Joe’s Spaghetti Pot” stands out like the proverbial star atop the Christmas tree. The weathered, Army-surplus stockpot (stamped “USME 1943”) sticks out 18 inches from the wall, with enough room to boil a regulation-sized basketball if you had a mind to. Over the years, Joe’s Pot has picked up more than its share of unscrubbable scorch marks and mystery dents that couldn’t quite be hammered smooth. Long since replaced by heavier, more efficient modern pots, Joe’s Spaghetti Pot hangs high in functional retirement, reminding me of epic family dinners of childhood.

In our New Iberia kitchen, Joe’s Spaghetti Pot was our largest (but rarely pressed into everyday service) cooking vessel. Like the Thanksgiving turkey roaster, it only got trotted out for special occasions, though not the ones that show up on any holiday calendar.

When Joe broke out his Spaghetti Pot, we were in for a theatrical mealtime performance — a Broadway-style extravaganza complete with special guest stars, complicated family histories and the Middle Eastern salads of his youth. The oversized pot was my father’s excuse to celebrate his immigrant heritage, explore the foods he remembered from childhood, and pass them on to his family and friends. When Joe cooked, it was a one-man show.

His specialty was a very specific red sauce he remembered fondly from childhood — a thin red sauce with a silky texture, deep tomato flavor and the faintest hint of garlic. Hand-rolled meatballs floated in the pot, just a bit too big to surreptitiously steal before supper. In the kitchen, Joe kept a sharp eye out for scavengers (his kids) as he prepped his signature culinary showcase and a sharing of his own table stories.

My dad, Joseph Blanco (Joe, to just about everybody), is one of those guys for whom the phrase “larger than life” doesn’t quite do justice. When I’m asked to describe him in casual conversation, I usually default to a single-sentence description that scratches the surface of the man’s complexity: “He’s an Italian Spaniard from the Lebanese side of Birmingham who looks like the real-life incarnation of Fred Flintstone.”

Born in 1930 and the older of two sons, Joe grew up on Birmingham’s south side (near the modern-day medical center) to a 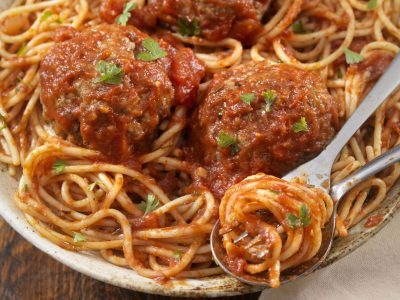 first-generation Spanish father and a mother of New Orleans Sicilian descent. His father Gumersindo — short, wiry and fiery — emigrated from northwestern Spain to Birmingham, Alabama and supported his family working as a knife sharpener, the traditional trade of his hometown of Ourense. His mother Mary — a Creole-Sicilian Musemeche from Rampart Street — took the train north and joined Gumersindo in the Iron City.

Both sides exerted strong influences on Joe before he left home and made his way through adulthood. As a student athlete at Memphis State University, softhearted military police officer in northern Japan and hard-nosed history teacher/football coach in suburban Milwaukee, Joe always identified with his immigrant past — consistently Catholic and proudly Mediterranean. With a good sense of story and quick wit, he slowly gravitated from teaching to the “sales professions” (cars, insurance) to provide for his wife and five kids.

After his first marriage in Wisconsin ended, Joe came down to South Louisiana, where his younger brother had settled after college. Fast-forward a few years to the mid-1970s: He married my mother (Carmelite Hebert) and made a blended stepfamily with eight children, and then nine. From the start, Carm and Joe had their hands full.

With two working parents and a gaggle of, at any given time, five to seven kids (toddlers to teens) under one roof, “running the house” required a lot of legwork. Most of the everyday cooking fell to Mama, at least until the children reached “make your own sandwich” age. She kept us consistently fed with a repertoire of simple dishes — pork chops and gravy, smothered chicken, tuna casserole, pepper steak — always in bulk and usually served over rice. Simple, affordable, reliable food.

But when Joe got a mind to cook, things slipped into a decidedly theatrical mode. When visiting family, or if impulsive “special occasions” cropped up, Joe would exclaim: “Come over! I”ll make spaghetti!” in a voice that was equal parts P.T. Barnum and nightclub crooner Louis Prima. It was like the father of the Prodigal Son announcing the feast of the fatted calf in front of the Count Basie Orchestra. (One Night Only!)

The word “spaghetti” was an identity trigger for Joe. On a normal day, the mere mention of pasta would bring his Italian side into full, boisterous bloom. Usually quick with a joke, Joe expressed exceptionally blunt opinions about other people’s recipes if the subject of sauce came up. When Mama cooked her version — a standard-issue meat sauce that the family liked just fine — he’d say that it was good, but “not real spaghetti.” He’d go on about the manifold difference between her clearlyinferior version and the perfection of his mother’s sauce, as Mama rolled her eyes and we all continued to eat. Before he and Mama were married, Joe once opened up my grandfather’s sauce pot, took a quick taste and, as he replaced the lid, dismissed it with a quick judgement of “It’s good. But not Italian…”

Once Joe made his periodic Pasta Proclamation, the performance commenced with his traditional shopping list. He’d check the spice rack for the proper seasonings — oregano, basil, pepper, a few cloves of garlic. He’d ransack the fridge crisper for various necessary vegetables. Onions and peppers were non-negotiable; lemons, tomatoes and parsley if he had time to make salad. After a quick pantry inventory for canned goods (tomato sauce and paste), he’d make two notes for the butcher section (ground beef, ground pork) and set out on a solo grocery excursion.

He’d return with a festive air, a few more sacks than he needed and a big bottle of red wine (a rare commodity in the house).

Once he unpacked and started cooking, it was best to keep your hands and feet away from the action. Usually not much of a kitchen guy, Joe would spend a few hours turning the kitchen into a zone of pure chaos. Every mixing bowl in the joint moved to the countertop. The cutting board clattered with the clunk of a not-so-sharp “big knife.” He worked his tall Spaghetti Pot to get onions sautéed to “lazy” stage, his tomato paste browned like a roux, and trace bits of garlic suffused before adding the thinner tomato sauce.

That done, he’d mix the ground meats together with some more onion, a few raw eggs, undisclosed herbs and two kinds of bread crumbs (packaged Italian and paste), he’d make two notes for the butcher section (ground beef, ground pork) and set out on a solo grocery excursion.

For the better part of a day, the kitchen would be Joe’s sole domain. If he was in the mood for vegetables, he’d make a version of his neighbor’s tabbouli, his take on this treat from his childhood in the old neighborhood. If any of the kids asked to help (to snack or maybe learn), he’d shoo us away, and we’d sneak back to watch from a safe distance.

Mama seemed to relish her banishment from the kitchen, and smiled, knowing that this meal, with all its ritual and precision, was Joe’s rare chance to have total control in the kitchen. To taste exactly what he wanted to taste and tell the old stories he needed to tell.

Later that evening, we’d dig into heaping piles of steaming pasta and remember why this was one of our favorite dishes. Joe would serve each plate with a flourish, adding an extra meatball if he felt you were deserving (or hadn’t already snuck three from the pot). He’d tell the story of how his mother Mary made her sauce. He’d tell old Birmingham family stories in between sips of wine and third servings — about family members we’d never meet or the time his aunt’s pressure cooker exploded. When Joe took over the stove, it was dinner and a show, and we savored the spectacle, even knowing that us kids would have to clean up the mess. Given the stories and the sauce, it was always well worth it.

A few times a year, I take down my own favorite spaghetti pot (a hulking, two-burner Magnalite) and make up my own red sauce, which bears almost no resemblance to Joe’s. No meatballs, whole tomatoes, green onions, and what he would consider a scandalous amount of garlic. I feed my friends, tell a few Joe stories, then freeze the rest in quarts for later. As I scrape out the last of it, I always leave a taste, look up at Joe’s Spaghetti Pot and grin at his displeasure. “It’s not Italian,” I think, “but it’ll have to do.”