King Cakes are a local tradition that’s meant to be shared. We ship anywhere in the continental U.S. Order Here.

For some, it’s the first time they hear Professor Longhair’s “Go to the Mardi Gras” playing on the radio. For others, it’s bundling up on January 6 to watch the Phunny Phorty Phellows gleefully cram into a St. Charles Avenue streetcar. But one thing that almost everyone can agree upon is that the first sighting of a sparkly purple, green and gold king cake is what really makes it official: Carnival is finally here. 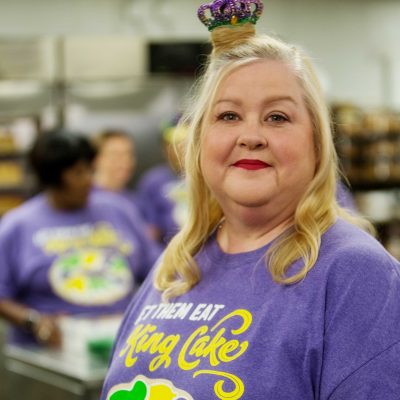 No Mardi Gras celebration would be complete without a king cake, and no one knows that better than Rouses Bakery Director Michelle Knight. (Last year alone, the company sold almost 500,000 king cakes during the roughly two-month season.)

The day after Christmas, Knight’s team gets to work on the store’s signature sugar-dusted purple, green and gold cakes (the colors represent, respectively, justice, faith and power).

Once Carnival season gets into full swing, it’s a 24-hour operation.

But king cake production at Rouses isn’t just a seasonal affair: It’s a 12-month production. Throughout the year, the cinnamon-filled cakes are both sold locally and shipped across the country to commemorate a host of celebrations: Purple and Gold king cakes make appearances at LSU tailgating parties, shimmering Black and Gold versions for the Saints abound during football season, and the doughy confection dresses up in emerald-green for St. Patrick’s Day. The day after Thanksgiving, the Christmas-themed cakes decorated in reds and greens, plastic poinsettias and tiny Christmas trees begin hitting the shelves.

For Knight and her bakery team, the days leading up to Fat Tuesday are, understandably, the busiest. Carnival krewes put in large orders to ensure that there’s no shortage of cake for each of their floats. Homesick
ex-pats across the country order cakes to help celebrate their city’s most revered tradition away from home. And no matter the occupation, any office setting is bound to have at least one cake on hand (if not more) throughout the season.

“It’s a 24-hour job during Mardi Gras — it’s non-stop,” says Knight, who has been with the company for more than a decade and took over as bakery director last year. “I start at about five in the morning, and then it’s running numbers all the way till eight o’clock that night to prepare for the next day. It’s making sure we’ve got enough boxes and bags, enough icings and fillings.”

The cake, believed to have been introduced to New Orleans by way of France in 1870, commemorates the Epiphany, with the accompanying baby figurine meant to symbolize Christ. While the present-day French version, or galette des rois, is a flaky pastry ring filled with frangipane, the version sold stateside is traditionally made with a sweet, yeasted dough.

At Rouses, 24 flavors of the festive cakes are sold at the 55 stores along the Gulf Coast. The top-selling flavors include a list of 10 all-time customer favorites like strawberry cream cheese, Bavarian cream, praline and apple as well as flavors including caramel, chocolate, cherry, blueberry, cookies and cream, and coconut, among others.

Most people are familiar with Rouses’ time-honored recipe, a soft and doughy cake with a cinnamon smear baked into the middle. This year, Knight and her team have something new up their sleeves: a brand-new cake made with a sweet brioche dough, and no cinnamon.

“Some people can’t do cinnamon and asked for this,” Knight says.

The new brioche cakes are sold in addition to the traditional cakes and feature the same selection of fillings. What’s different about them is not just the absence of cinnamon, but their appearance, says Knight.

“It looks a lot different,” she says. “We bake the filling in the top of it. In the traditional king cake, all you’re seeing is the purple, green and gold — and the filling is on the inside. This way, you’ll be able to see the cake with the dabs of filling on the outside with a drizzle of the icing.”

The Rouses original recipe dates back nearly 60 years and involves a time-tested method, with careful precision and multiple steps. First, the dough is prepared and stretched into the oval shape, then put into pans and a proofer box, where the yeast-leavened dough can rise. After about 40 minutes, when the cakes have roughly doubled in size, they are removed from the boxes and allowed to dry out slightly, around 15 minutes. When the cakes are ready to be baked they go into the oven for about 18 minutes, until they’re puffy and a light golden brown.

After the cakes have cooled sufficiently, bakers flip them, fill them from the bottom and then turn them back right side up so they can be quickly iced and sugared. The final touch is the plastic baby, which Rouses places in the center of the cake rather than tucked inside.

During the parades, an early morning baker usually prepares the cakes for the floats while a later shift starts prepping for the next day. Knight says it’s not uncommon for her to routinely get calls from bakery members at 4 a.m.

“It might be that we need to restock babies, or boxes, or that we’ve got an order for 300 cream cheese cakes in,” Knight says.

Some stores are busier than others, including the flagship Thibodaux location and the New Orleans stores near the parade routes, but every bakery department bakes their own cakes fresh daily. It’s a group effort, and one that Knight says wouldn’t be possible without her team.

“It takes a lot of hard work to get the job done. It is a long process, and we don’t take shortcuts,” Knight says.

“The truth is, it’s all about having a great team. You could come up with many recipes and great items, but unless you have the team to push it and show it and love it — it doesn’t work,” Knight says.

“We’re family, that’s what we are. To see us in the midst of chaos — to be so calm, cool and to know what to do to get the job done, it’s just amazing to see. To me, that’s what Mardi Gras is all about — bringing the team together, and doing something fun.”