There’s an old saying that “All politics are local,” and a similar thing can be said of New Orleans’ po-boy culture.

Our city’s trademark oversized sandwich is, at its core, a local convenience food — a default lunch grabbed on the go or a quick informal supper. Sure, we might make a crosstown trip for a weekend excursion to R&O’s or a destination lunch at Domilise’s, but more often we’ll learn the standouts at our local corner grocery (the always dependable turkey or the griddle-crisped ham and cheddar) for the evenings when we want to take a night off from cooking.

I’m thinking about this as I’m cruising along the downhill side of the I-10 High Rise bridge headed for the heart of New Orleans East. I’m also thinking about a certain sandwich that would trigger a trek a mile or so past the New Orleans Lakefront Airport.

This particular sandwich isn’t your ordinary po-boy, but a variation that enjoys a dedicated international following every spring as Jazz Fest comes around. Each year the crowds flood the New Orleans Fair Grounds for seven days of live music, local culture and edible specialties that redefine the phrase “festival food.”

The sandwich in question is a Jazz Fest classic for legions of food-crazy music fans who always put the “Cochon de Lait” po-boy on their Jazz Fest culinary checklist. For many folks not lucky enough to live in a po-boy-centric universe, it’s an absolute revelation — a light French roll filled with chunks of insanely tender, long-smoked pork shoulder and a layer of creamy, mustard-spiked coleslaw on top. For locals, it was the precursor to the recent barbecue revival and (sadly) available only two magical weekends a year.

But there’s a problem built into the Jazz Fest rhythm — the joys of this Cajun-inflected, smoky-meat wonder has to compete with a million other dishes available at identical tents in the Fair Grounds food areas. On the positive side, the “Cochon po-boy” is one of many flavors easily procured between sets at the Acura Stage and power choirs at the Gospel Tent. On the downside, the experience often gets blurred, coming as it might in a day filled with Crawfish Bread, Mango Freezes, Ya Ka Mein, Natchitoches Meat Pies, Vietnamese spring rolls, sno-balls, beer and Roman Chewing Candy.

So it’s off to the east I go, where I can focus on the joys of the Cochon de Lait po-boy at Walker’s Southern Style BBQ on a cold Wednesday in early February — about as far from Jazz Fest as possible. 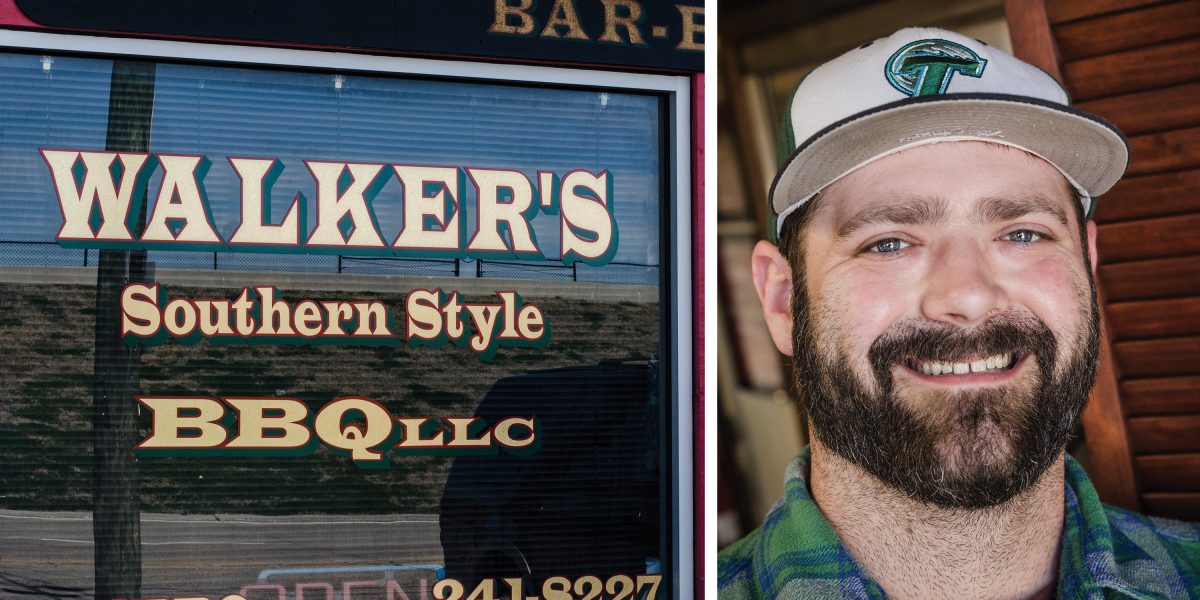 The tiny barbecue joint — barely bigger than a standard home kitchen — shares a building and common bare-bones dining room with Castnet Seafood, an equally straightforward fry-and-boil establishment across the street from the Lake Pontchartrain floodwall. An intoxicating mix of woodsmoke and peppery crawfish fumes wafts across the parking lot. After a long drive east and an appetite primed for pork, I walk up to the hand-lettered whiteboard that announces the day’s special in bold letters “BRISKET SPAGHETTI $8.99.”

At that moment, I’m feeling my laser-sharp focus waver a bit ­— but I shake it off and get my brain back into pig mode. Gotta get that sandwich.

It’s about an hour before the doors open to the general public, and Jonathan Walker and his crew are preparing for the lunch rush. Five days a week, they sell a varied menu of smoked specialties starting at late-breakfast hours. “We open at 10:30 a.m. and shut down when we run out,” says Walker. Most days that’s about 1 p.m., but on a busy day, it can be as early as halfway through the noon hour.

The work areas in Walker’s tiny kitchen are a blur of activity and a carnivore’s fantasy. One minute, the stainless steel prep table holds a freshly cut brisket, sliced and slightly fanned out to reveal a serious pink “smoke ring” and a thin black outer crust. The next, it’s piled with stacked slabs of pork ribs, meat gently pulling away from the exposed bone ends. Then it’s topped with a sheet pan filled with a flock of golden-brown chickens, cut in half and stacked for easy serving. Any bird that doesn’t fly the proverbial coop by end of shift becomes another Walker’s specialty, smoked chicken salad.

So delicious. So distracting.

But back to the po-boy. Walker holds out an individual-sized baguette in one hand, cut partway through to reveal a bright white interior.

“See this? This is one of the secrets.” The bread comes from another classic purveyor from New Orleans East, the Dong Phuong Bakery on Chef Menteur Highway. Fresh-baked a few hours earlier, the paper-thin, golden crust crackles under the slightest pressure. “This is the best French bread in town,” says Walker. Tiny flecks gather on the square paper as Walker gives the roll a gentle squeeze.

Next, the sandwich’s trademark coleslaw, built in two simple steps — a generous squeeze of mayo-based dressing and a half-handful of multicolor cabbage mix (a Carnival-appropriate mix of purple, green and gold).

The Walker family — Jonathan, his father Skip and mother Wanda — developed their recipes and reputation on the catering circuit under the name Love at First Bite. Though native to New Orleans, much of the family went to school at University of Louisiana at Lafayette, where the Cajun whole-hog cochon de lait tradition inspired their signature “Southern Style BBQ.” In the 10 years since they opened the restaurant and gained fame slinging po-boys at Jazz Fest, the Walkers have taken their show on the road to local food festivals and events as far away as Vermont and Washington state.

With the bun properly prepped, Walker pulls out the star of the show — a smoked Boston butt pork shoulder that’s spent the better part of a day on the smoker. “The pork goes for 14 hours,” says Walker matter-of-factly as he uses tongs to separate the bigger muscles of the slow-cooked shoulder.

Not that it takes much work, mind you. The meat’s been slowly roasting to the point of luscious tenderness. Sitting in a stainless holding pan, the fragrant roast would fall apart if you so much as looked at it mean. A little tong pressure splits the 8-pound chunk into po-boy-sized servings, each with a bit of spicy crust providing contrast to the almost silky fat-laced pork.

I take my po-boy to the dining room, slap the Styrofoam clamshell box on the Formica tabletop, and dive in. The sandwich is everything you remember from your first bite at Jazz Fest: a perfect mix of smoke, spicy and sweet with a matching interplay of texture — tender and crunchy — in every bite.

A few bites into the sandwich, I start to appreciate this far-flung jewel, and immediately start plotting my next drive east and my eating plan for the upcoming Jazz Fest, thinking how lucky I am to have this as a long-lunch option four days a week. And … while I’m here … how I should try that Brisket Spaghetti special. And a couple of sides … maybe I’ll just get the last half of the po-boy wrapped up for dinner …

Half an hour later, I’m climbing the High Rise, headed west with a passenger seat full of go-boxes and feeling uncomfortably but blissfully full. The Brisket Spaghetti was a simple genius dish — smoked beef cubes in an earthy red sauce — that might be the best workaday riff on old-school Creole daube ever. Another dinner plate of pulled pork shows off the Walkers’ deeply spicy house barbecue sauce with a scoop of yellow potato salad.

As I fly past the downtown skyline, I add Walker’s Cochon de Lait po-boy to my mental list of “late breakfast” options for beyond the Fair Grounds in springtime.