The label of an Italian wine tells you everything you need to know about its pedigree.

You’ll find the name of its winery (where the grapes were processed) or sometimes its vineyard (where the grapes were grown). If you are looking at the label of an estate wine, that term means a single organization owns the winery and all the vineyards contributing to the wine, and that the whole process, from seed to bottle, takes place on-site in a controlled geographic area. You’ll also see on the label the wine’s region, grape, vintage and level of quality control.

So Which Is the Good Stuff?

Old World producers take wine very seriously, and strict laws are in place to keep just anyone from calling their sparkling wine “Champagne” or marketing swill as a vino da meditazione (a “wine to meditate over”). There are four levels of quality assurance in an Italian wine. They are:

Where Italian Wines Are Born

Italy produces more wine by volume than any other country in the world. The country’s 20 wine regions grow over 370 unique varieties of grapes. Regions matter, because when you are drinking wine, you are drinking the Earth itself. Every year, weather, temperature and soil chemistry vary and produce what are sometimes dramatically different wines from precisely the same place. Because these wine regions have been cultivating their fields for centuries, and sometimes millennia, they each bring distinct characteristics to the barrel, and later, the bottle. Here are the wine regions of Italy, and what manners of magic you can expect to find there. 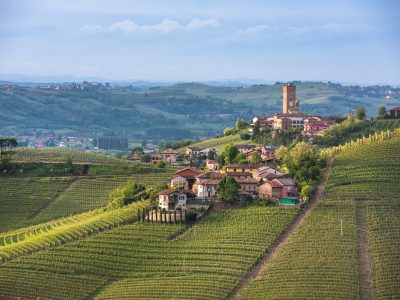 Nestled in the Po Valley and at the foot of the snow-capped Alps is the Northern Italian region of Piedmont. It is known for the city of Turin and for two of the great red wines of Italy: Barbaresco and Barolo. Both DOCG wines have a characteristic gentle ruby color, a reflection of the area’s Nebbiolo grapes that are used in the winemaking. Barbaresco wines are usually lighter tasting and less tannic than Barolo. Of the Barbarescos, our Sommelier suggests Fontanafredda and Chiarlo; of the Barolos, go for Prunotto and Gaja.

Piedmont has more DOCG designated wines than any other region in Italy, and is known also for the sparkling sweet wines Asti Spumante and Moscato D’Asti, both of which are made from sweet Moscato grapes. For a memorable Asti Spumante, our Sommelier suggests Gancia and Cinzano; for a good Moscato D’Asti, try Stella Rosa, Chiarlo, Risata, Luccio, Ruffino or Cavit. (Or try all six!)

It’s hard to believe one region could produce so much good food and drink, but Emilia-Romagna has found a way. It is where Parmigiano-Reggiano, Prosciutto di Parma and Modena Balsamic Vinegar are produced. The region’s best-known wine is Lambrusco, a semi-sparkling (“frizzante”) red. Lambrusco accounts for five percent of the total wine produced in Italy. Our Sommelier suggests Riunite, Cella and Bellagio Lambrusco.

The coastline of Liguria is perhaps better known as the Italian Riviera, famous for its beaches and colorful villages. It is also home to over 100 varieties of grapes and eight DOC wines. In 1972, Rossese di Dolceacqua was the first wine to be classified as such, and it is considered the region’s best grape.

Franciacorta, Italy’s prized sparkling wine, is produced in Lombardy using the “méthode champenoise” style, which involves a second fermentation in the bottle. It’s how Champagnes and good sparkling wines get their bubbles. In Italian, it is called metodo classico (“classic method”).

This is the smallest wine region in Italy. Its wines are not commonly found in the United States. 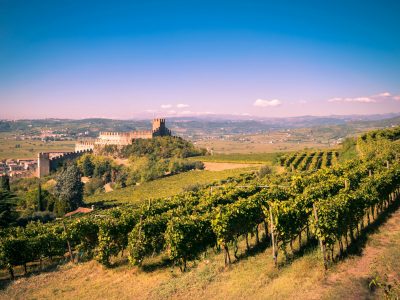 Veneto is situated in Northeast Italy. It is bordered to the west by Lombardy and to the south by Emilia-Romagna. Verona, where Shakespeare’s tragedy Romeo and Juliet is set, is the wine capital of the region. It is also the home of Vinitaly, the enormous annual wine and spirits exhibition held every April.

The province is best known for sparkling Prosecco wine; Soave, Lugana and Pinot Grigio whites; and Amarone, Valpolicella and Bardolino reds. Our Sommelier suggests trying Soaves from Bertani or Bolla. As for Proseccos, you have some choices on the menu: Ruffino, Mionetto, Riondo, Avissi, Lunetta, Benvolio, Torresella, Santa Margherita, Bolla and Bisol Jeio.

The mountainous Alpine area of Trentino-Alto Adige, located on the Austrian border, is Italy’s northernmost wine region. While Trentino is classically Italian and almost entirely Italian speaking, Alto Adige, located just north of it, has a predominantly German-speaking population. Because foreign grape varieties perform well in this region, its reds and whites should sound familiar: Pinot Grigio, Pinot Bianco, Sauvignon Blanc, Chardonnay, Pinot Noir, Merlot and Cabernet Sauvignon. Lagrein, made with an indigenous red grape, is a local favorite.

Some of Italy’s best Pinot Grigio and Sauvignon Blanc can be found in Italy’s northeast regions. Friuli-Venezia Giulia shares borders with Austria and Slovenia, touches the Adriatic Sea, and is adjacent to the Veneto region. The area’s flagship white wine (and popular choice of locals) is Friulano, but don’t overlook their Merlots and Cabernet Sauvignons.

Located right on the ankle of Italy’s boot, Molise is famous for its three DOCs: Biferno (named after the region’s largest river), Pentro di Isernia and Molise del Molise. Wines from the first two can be red, white or rosé. Molise del Molise, the newest of the three, encompasses the entire region and produces white, red, rosé and even sparkling wines. 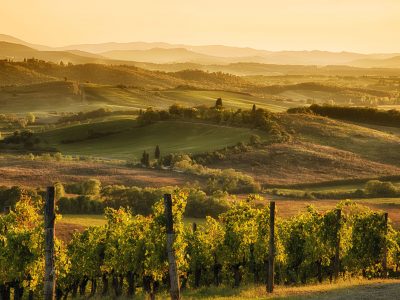 Almost all of Tuscany’s best wines are red. The area has five major wine regions, including Chianti, where the country’s best-known wine is produced. The basis for Chianti wines is the Sangiovese grape. Other varieties include Carmignano, Brunello di Montalcino and Vino Nobile di Montepulciano (not to be confused with Montepulciano d’Abruzzo). Tuscany’s most famous white wine is Vernaccia. The region is famous also for the dessert wine Vin Santo. According to our Sommelier, you can’t go wrong with any of the following Chiantis: Banfi Classico, Banfi Superiore, Monsanto, Ruffino Aziano, Ruffino Il Ducale, Rocca, Antinori, Santa Cristina, Santa Margherita, Tenuta Arceno and Volpaia. If you like whites, try the Rocca delle Macìe and Vernaccia di San Gimignano.

Found on the eastern edge of Central Italy, Marche’s best-known wine is Verdicchio, a dry white made from the “little green” grape of the same name. Only a few of the wines produced here are sold in America.

If you’re in the Latium region, which once gave birth to the Roman Empire, you’re probably more interested in seeing the Pope than drinking wine. Still, why limit yourself? Locals have been cultivating grapes here for millennia, and the most celebrated wine in Latium is Frascati Superiore, a white wine.

Choices from the up-and-coming wine region of Campania are getting better by the day. Falanghina, Fianco and Greco di Tufo are the most popular whites, but Campania’s most important variety is arguably Aglianico, a red grape used to make Taurasi and Aglianico.

The toe of Italy’s boot, Calabria is an emerging wine region, with whites made mostly from Greco Bianco, a grape widely found in Southern Italy. Other wines are produced from the Gaglioppo grape, a variety best known for producing soft, rounded reds. Both grapes are of Greek origin.

In Italy’s heel, Apulia has four DOCGs and 29 DOCs — more than any other region in the south. Its best-known wines are Primitivo di Manduria, a DOC made from Primitivo grapes, and Salice Salentino, which is produced with Negroamaro, a red grape local to the area since at least the sixth century B.C.

Italy’s largest island has perfect conditions for growing wine, and hosts more vineyards than any other region in Italy. Sicily produces enormous amounts of wine, most of it white. There are many DOC areas in Sicily, but only one DOCG: Cerasuolo di Vittoria, which produces a red made with the island’s Nero d’Avola and Frappato grapes. Our Sommelier suggests Zisola Nero d’Avola.

This island off the west coast of mainland Italy is home to Sella & Mosca, which is among Italy’s most outstanding wine estates. Sardinia’s best whites are made with Vermentino, a light-skinned grape. The most celebrated of the Vermentino whites is Vermentino di Gallura, a DOCG. Its best reds are produced with Cannonau — the local name for the Grenache grape. Other important Sardinian grapes are Carignano, Bovale Sardo and Monica. Our Sommelier suggests Sella & Mosca Cannonau di Sardegna Riserva.