My father Michael became obsessed with family history years ago. At times he will invite the world of social media to compare the face of a distant relation with the one of his children’s faces. When that happens, it’s time for a cocktail.

And whenever the topic of cocktails comes up, the story of bitters must be told—and it comes with a little family history of its own. We’ll start with punch.

British Lord Admiral Edward Russell in 1694 ordered a pool filled with punch for an officer party. According to the tale recounted in books and articles, the concoction included (don’t try this at home): four large barrels of brandy, eight barrels of water, 125 gallons of Malaga wine, 1,400 pounds of sugar, 2,500 lemons, 20 gallons of lime juice, and five pounds of nutmeg. A boy in a small boat reportedly rowed about the punch, serving it to the guests.

But that was a rich man’s punch. “For most people back then, things like citrus, nutmeg and clove were expensive and hard to come by,” said Dale DeGroff, master mixologist, author and founding president of The Museum of the American Cocktail. “Adding bitters was a way to make the poor man’s punch taste like the rich man’s punch.” 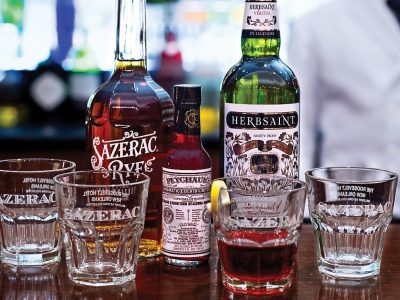 Bitters are high-proof spirits infused with fruit, spices, tree bark, roots and other aromatics that were first developed and marketed for medicinal purposes. Angostura, one of the world’s most famous brands, came into existence around 1824 when Johann Siegert, a doctor in Venezuela, used bitters to help the troops with malaria and upset stomaches. The famous Peychaud’s Bitters were invented around 1830 by Antoine Amédée Peychaud, a Creole apothecary from Haiti who settled in New Orleans. When friends gathered for late night parties at his pharmacy on Royal Street, Peychaud would mix brandy, absinthe and a dash of bitters for his guests—a drink that later came to be known as the Sazerac.

“The role of bitters was to create a new classification of mixed drink called the cocktail,” DeGroff said. “Today, bitters serve as a foil for the sweet but also certain types of bitters can be used as flavor enhancers.”

The classics — Angostura and Peychaud’s—can be found at Rouses along with Bittermens, Bar Keep, El Guapo (made in New Orleans) and Dale DeGroff’s Pimento Aromatic Bitters.

While promoting his Pimento Aromatic Bitters in New Orleans and around the world, DeGroff said he’s found a renewed interest in more complex tasting cocktails. During a taste test he conducts on tour, DeGroff fills five sauce cups with different aromatic bitters. He then lines them up with five glasses filled with a “generic” batch of Manhattans (sweet and dry vermouth, rye whiskey). “It’s stunning … what you end up with are five completely different cocktails,” he said. Mojitos are another cocktail that tastes better with bitters, he added. “In Cuba all the mojitos are served with bitters.”

Like all good family history, bitters have “cousins.” Long before bitters and cocktails, shrubs were prepared as a base for punches by pounding sugar and lemon rinds together and then leaving the lemons to do their work extracting the lemon oil. Once the sugar was gooey with lemon oil, lemon juice and water were added, changing the mixture from a simple oleo-saccharum to a shrub.

Vinegar shrubs were first used in colonial America by folks who had difficulty getting fresh lemons. Vinegar served as a substitute acid to offset the sugar, but lemons were much preferred when they were available, according to DeGroff. “Vinegar is difficult to use since one has to work very hard to disguise an unpleasant vinegar taste and aroma in the final punch or drink,” he said.

Other close relatives are fruit and herb syrups used in cocktails such as a mint julep. Liber & Co. offers both shrubs and syrups, and New Orleans-based Cocktail & Sons offer a suite of bar syrups to sweeten up cocktails.

But as family history goes, bitters appear to be entering a golden age. After almost disappearing after the U.S. government’s crackdown on alcohol during Prohibition in the early part of the 20th century, bitters are making a come back. Today, the number of brands on the market is exploding, reflecting a new generation of cocktail culture that reaches way beyond a vintage punch.