When you’re planning a wedding, there are a lot of questions to consider. Buffet or sit-down dinner? Top-shelf bar or signature cocktail? If you tie the rings to your dog’s collar, will he make it to the altar without eating them? Why does that website insist that what your union really needs to endure is a special cake knife engraved with your initials and the date — and how does that cost $200, anyway? And for New Orleans spouses-to-be, there’s one more question: Will you second-line? 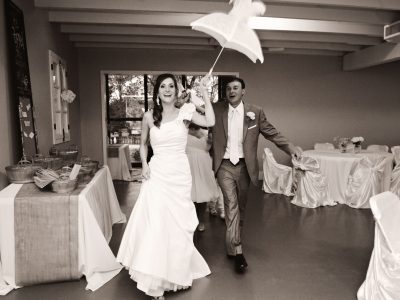 The joyous second line parades put on most weekends in New Orleans by venerable African-American social aid and pleasure clubs have their roots in the even older tradition of jazz funerals, which honored the dead with public music and dance. Today, more and more New Orleanians — and tourists as well — like to adopt the celebratory tradition of parading with a band to mark a special occasion.

“My daughter just graduated from college in New York,” said trumpeter Dr. Brice Miller. “We couldn’t bring a brass band up there with us, but we brought a second-line umbrella, and she walked the stage with it.”

As the leader of the Mahogany Brass Band, Dr. Miller has played his fair share of wedding second lines. They weren’t always ubiquitous, he said.

Grace Birch, a Loyola graduate and communications professional, said that it was actually her London-born fiancé, Christian, who was set on having a second line at their 2013 wedding. Born and raised in New Orleans, she worried that orchestrating her own parade might feel contrived.

“But some of our best memories were listening to the Treme Brass Band at the Candlelight Lounge,” she said. “The Treme guys were so instrumental to our dating and our courtship, and they made some magic moments for us over those five years. So it was only appropriate for them to be there for our special day.”

A late-season hurricane threatened to derail their plans. Birch argued with her husband-to-be, she said, trying to call off the second line so that the party wouldn’t get soaked or worse. But Treme Brass Band bandleader Benny Jones told the couple that the parade was going to roll, and it did.

“And in the end it was one of our highlights,” she said. “The weather held off, and the photographer caught our relief and joy on film.

“We were marching down the street, Christian smiling ear to ear, with the cathedral behind us,” she said. “It was one of our most magical moments.”

Victor Pizarro and Tim Walls were already married, technically, when they second-lined in New Orleans to celebrate their union in 2017. Their small waterfront ceremony a year and a half earlier, in Walls’ home state of Maine, was romantic — but Pizarro wanted a party that celebrated the culture of his native New Orleans, with all his extended family and friends. So after a second ceremony at the Cabrini Bridge in Mid-City, the Treme Brass Band paraded them to the reception venue, where a WWOZ DJ spun records. The couple hired pedicabs to ferry older relatives along the route.

“It was a great way to get people from the wedding site to the reception site,” Pizarro said. “And passersby on the street saw it was our wedding and congratulated us.”

“Like all things New Orleans, when it comes to our culture — when you do it right, everybody wins,” Miller said. Even though wedding and convention parades aren’t explicitly rooted in deep heritage the way funerals and social aid and pleasure club parades are, they provide necessary gigs for brass musicians — and the kind of demand that inspires young artists to learn the old songs and customs, knowing that those skills will not only preserve a storied culture, but also generate work.

“As someone who’s been on both sides of it,” he said, playing a wedding second line is “a way of me sharing a piece of who I am, my culture, with other folks. And it creates a beautiful memory.”

Dr. Miller’s own wedding reception took place at Gallier Hall — which is now, in his capacity as director of Mayor Cantrell’s Office of Cultural Economy, the location of his office. He and his wife, Shaneeka, hired not one but two brass bands for their wedding second lines: the Treme to parade them into the stately hall, and Miller’s own group, the Mahogany, to conclude. Did he play his own wedding?