Artichokes may look a little daunting to the uninitiated, but all those spiky leaves hide a bit of tender goodness at the base and embrace a delicious heart. Frozen or canned artichoke hearts make a great shortcut, already cleaned and ready for use in salads and other recipes. Don’t let their fierce appearance frightens you! Just sit next to me at dinner, and I’ll instruct you in the ways of the artichoke.

If fresh is the way to go in your house, just slice off the stem close to the globe so the artichoke stands upright. Cooking them can be as simple as steaming them in a couple of inches of water for 45 minutes or so until a leaf easily pulls away, ready to be dipped into melted butter spiked with lemon. Add a little lemon or vinegar to the boiling water to help keep the artichoke green. After the leaves have all been nibbled, the heart awaits discovery at the base. Scrape off the fuzzy layer and enjoy. It brings a whole new meaning to the process of eating with your hands.

Using scissors, finicky cooks can clip away the top third of the spikes and slip a thin slice of lemon between the leaves for extra finesse and “oomph.” If you’re getting really fancy, artichoke plates are de rigueur, with a center divot to hold the artichoke upright, a shallow bowl for lemon butter sauce and an area for discarding the leaves. Appropriate sauces for artichokes include Hollandaise, mayonnaise or a nice garlicky aioli.

Iconic chef Warren Leruth set everyone scrambling to duplicate his now famous, classic artichoke and oyster soup. Cooks jealously guarded their own versions of the recipe, which finally made its way into many cookbooks and onto the Internet, where several excellent recipes are readily available to anyone who knows how to Google. It was far too good to keep as a secret for very long.

Savvy crawfish boilers often include in their pots some miniature artichokes — so tender that they can almost be consumed leaves and all. When steamed, cut in half and sautéed, these minis can make a special appearance on salads or as charming garnishes.

Romans, Greeks and adventurous, vegetable-loving populations from other Mediterranean countries have been cultivating artichokes for centuries. California is the primary producer in the United States; however, these scrumptious globes can be successfully grown in most Southern states below zone 7 on the USDA Plant Hardiness Zone Map. The Gulf South is no exception.

The Gulf Coast’s Sicilian tradition places stuffed artichokes at the top of our local favorites list. Place one in the center of the table and watch everyone fight over it, all the while just smacking and smiling. You’ll discover that one is just not enough unless there are only two people. Even then I like to have my own!

A word of caution: This recipe contains a good bit of garlic. If you’ve managed to consume more than your fair share, make certain that anyone you’re planning on spending time with for the next few hours has done the same.

Our local love affair with artichokes began in the late 19th, early 20th century when thousands of Southern Italian and Sicilian immigrants settled along the Gulf Coast. 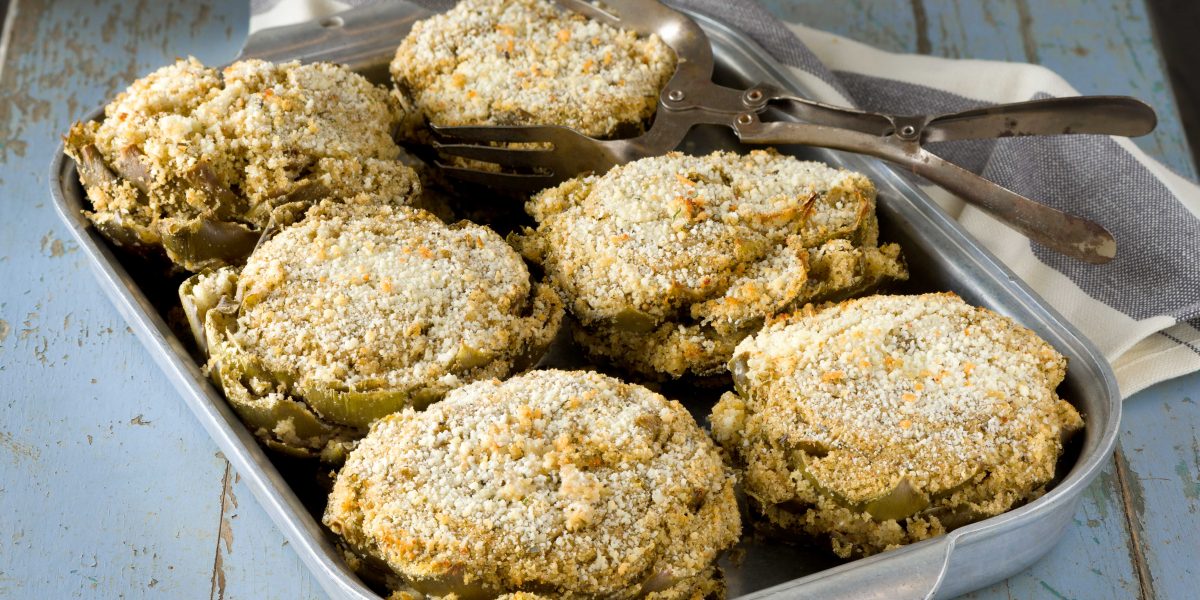 In the Middle Ages, Sicily was suffering from a severe drought, and the faithful prayed fervently to St. Joseph, the patron saint of the family, to end their suffering. When the rains finally came, a bumper crop of fava beans grew, saving the people from starvation. In thanks, Sicilians promised to honor and remember this great favor with altars adorned with food and erected each year in St. Joseph’s honor. Because St. Joseph’s Day (March 19th) always occurs during Lent, only meatless dishes are prepared. Much of the food includes “sawdust,” or breadcrumbs, to honor St. Joseph the carpenter. The “lucky beans” are also a mainstay on the St. Joseph’s Altar.