“You’re in luck,” food writer Robb Walsh told me over the phone, “I got hold of some outside skirt steak. It’s pretty rare these days. I’ll make fajitas when you get here.”

A week later, when I pulled up to my friend’s house in Houston, I could feel the heat from his barrel-style grill radiating onto the patio and see his long dining table filled with traditional fajita fixings. After we exchanged pleasantries and cracked open a couple of beers, we hit the grill with a platter of marinated beef for dinner.

The fajitas sizzled as they hit the grill and required just a few minutes on each side to get to a perfect medium rare. I could smell the savory fumes coming off the pit — meaty goodness spiked with garlic, soy and a little bit of sweet.

As the fajitas hissed over the coals, Walsh described his summer travels, many of which — not surprisingly — were meat-related. The next day, he would run a weekend Barbecue Summer Camp at Texas A&M University, and after that, a traditional Father’s Day community barbecue in the tiny town of Millheim, Texas. It was going to be a busy summer.

Walsh has written about Texas food for more than 25 years — from his position as restaurant critic and food editor for The Austin Chronicle to his current gig as reviewer for Houstonia magazine. He’s also written more than a dozen books on nearly every aspect of the state’s food, from “chuck wagon” cowboy cooking to slow-smoked barbecue to hot sauce and definitive cookbooks on Tex-Mex cuisine. An avid researcher, Walsh’s works bring a historian’s rigor to the stories behind the recipes.

In 2010’s The Tex-Mex Grill and Backyard Barbecue Cookbook, Walsh described fajitas as “the heart of modern Tex-Mex,” the regional variant of Mexican food native to the Lower Rio Grande Valley in the southern reaches of the Lone Star state. Originally cooked by Tejano cooks — Texans of Mexican descent — sometime in the 1960s, this spicy, savory, grilled specialty appeared on menus across the country 20 years later, making the humble cut of meat (outside skirt steak) popular and increasingly in demand.

“These days, it’s tough to get outside skirt,” he explained. Due to loopholes in international trade laws, ranchers export 90% of the cut to Asian markets. “I got this at A&M, but when I can’t, I substitute a flatiron steak, which is cut from the shoulder, or a butterfly cut across the boneless short rib.”

If you have any questions about a cut, ask your Rouses Butcher. Rouses will gladly cut, trim or butterfly any cut of beef we sell.

After a quick check, he lifted the thin slabs of meat to a waiting platter, let them rest for a few minutes, then cut them carefully across the grain before bringing them to the table.

Over the next hour or so, I built a series of perfect tacos with the spread set before me — guacamole, three homemade salsas, refried beans, shredded lettuce and cubed summer tomato.

Each beefy taco was slightly different, but absolutely perfect.

Pushing back from the table, I had to admit that Robb was right after all. On this day, during summertime grill season in the heart of Texas, I was indeed in luck. 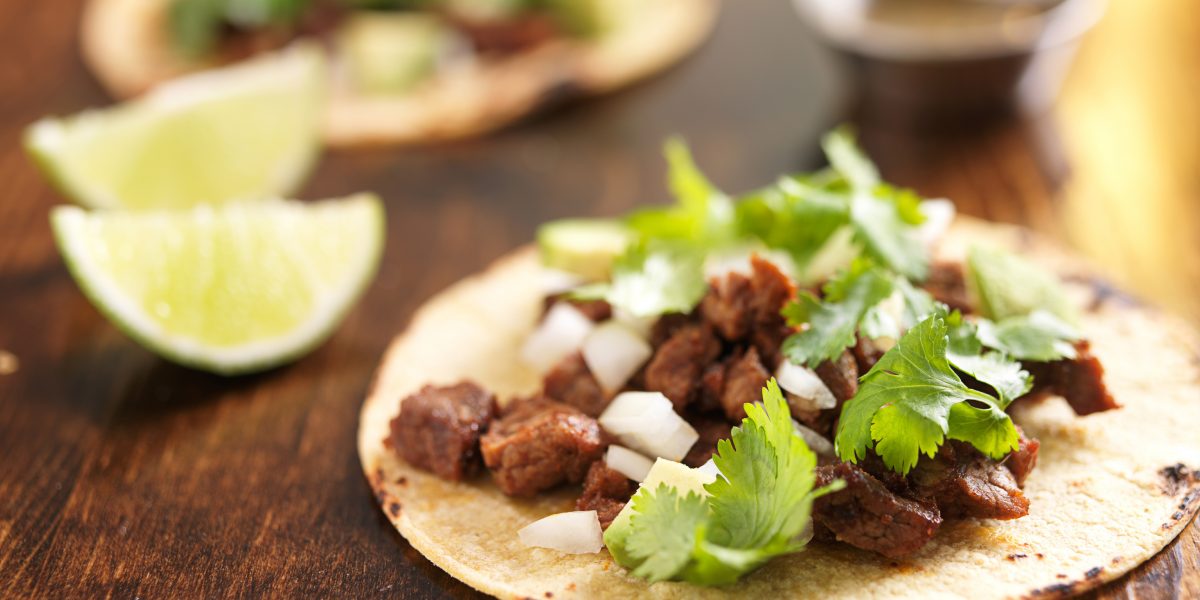