I did not grow up in a coffee-drinking household.

Hot tea was my mom’s go-to beverage. I did not grow up in a peanut-butter-and-jelly-eating household either, but that is a story for another day.

My father did drink hot coffee, dripped in an old-fashioned percolator. The coffee was thick and inky, looked and smelled strong, and was kept in a plastic canister in the refrigerator until he drank all of its contents — generally, within a week or so. He would heat up less than a mugful, then add milk, creating his own version of café au lait. I eventually “learned” to drink coffee in a teachers’ lounge, where the hot beverage serves as a must-consume, or so it seems, for faculty and staff across all grade levels.

A friend recalled her earliest experience with coffee concentrate, which was different from my dad’s. Her father cold-brewed thick Union Coffee in a Filtron coffeemaker, a process in which time takes the place of heat (the Filtron process is the original cold-brewed coffee system). Her dad’s ritual was to drain the liquid concentrate in the morning into an empty Chivas Regal Scotch bottle, which he stored in the refrigerator.

Many families on the Gulf Coast have made coffee concentrate at home, as was the case with the McCrory family, owners of New Orleans Coffee Company and creators of CoolBrew Coffee.
Jeff McCrory, company president, who, along with his brother, Gregory, operates the business his father established nearly 30 years ago, has his own coffee tale to tell.

“We drank instant coffee when we were kids; however, my grandparents brewed CDM coffee with chicory,” recalled Jeff McCrory. “I thought the brewed stuff they made tasted bitter, and I always preferred the instant, although I’m not really sure I enjoyed it.”

As McCrory also remembers, his father, Phillip, drank a lot of coffee. Director of pharmacy services for the State Office of Public Health, and often described as a Renaissance man, Phil was on a quest for a better-tasting, less acidic coffee, begun when a friend gave him a Filtron cold-water coffee brewer to make concentrate. The family voted his new version a hit. That was in 1986, when coffeehouses weren’t anywhere near as plentiful as they are today.

“When dad starting making CoolBrew, blending it with chicory and other stuff, it was the first time I tasted coffee I liked,” said McCrory. “And I would have friends over after high school, and Dad invited us to try it, and all the guys liked it. That’s when we came up with the crazy idea to put this stuff in a bottle and sell it.”

New Orleans’ rich coffee heritage proved an ideal backdrop for the elder McCrory’s quest, as he pored over a wealth of information to aid him in repurposing the more than 150-year-old cold filtration process. 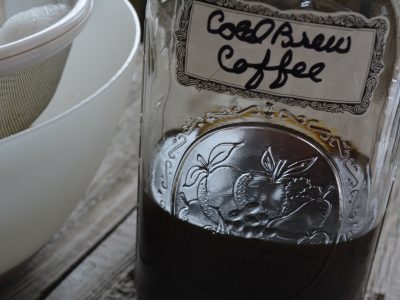 What Is Cold Brewing?

Cold brewing is the unique process of capturing the full flavor of freshly roasted coffee using only cold water, extracting the most flavorful essence from freshly roasted coffee and using absolutely no heat. The cold-drip process calls for steeping ground coffee over a long period, which minimizes acidity and celebrates the beans’ natural flavors. There is no heat used in a cold-brew process, so most of the acids normally found in hot brewed coffee remain in the grounds, producing a rich, smooth and less bitter coffee — or, in the case of CoolBrew, a rich and smooth coffee concentrate without the bitterness.

The McCrorys believed in their product and decided to act on their crazy idea. They started their company, then called Coffee Extractors of New Orleans, in a building in Covington.

“Few people had heard of iced coffee back then, but its popularity grew,” recalled McCrory, who decided working alongside his father in the coffee venture was preferable to college. “I liked what we were doing and creating,” he said. In 1989, they changed the company’s name to New Orleans Coffee Company.

Today, the family brews and distributes the all-natural, liquid coffee concentrate from a warehouse in the Mid-City neighborhood of New Orleans. Phil has since passed away, but Jeff and Greg are at the helm, with the third generation — Jeff’s son Dylan — now on the team.

And over 35 years ago, coffee pioneer Phyllis Jordan, founder of PJ’s Coffee, the local coffeehouse institution, developed and perfected the cold-drip process that helped make PJ’s an original New Orleans icon. I had my first iced coffee at the original PJ’s on Maple Street in the mid-1980s. I was hooked from my first sip. Today, PJ’s markets cold-brew “bean bags,” pouches of ground coffee beans that allow consumers the ability to craft their own iced coffee concentrate.

For the McCrorys, the fun is in continuing their father’s legacy, experimenting with different flavors and coming up with new ideas. “It was fun to be in the business when the cold-brew movement began and then took off, especially over the last five years. And there is the constant pursuit to find the next big thing, the next crazy idea,” said McCrory. 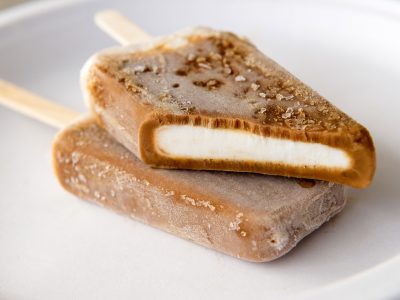 For Jeff McCrory, the next crazy idea can be found on a stick. Literally. Called Café Bar, the new product sees him joining forces with Adrian Simpson, owner of New Orleans Ice Cream Co., which makes ice cream flavors inspired by the food-crazed culture and local tastes of New Orleans.

The ice cream company has its roots in New Orleans Coffee Company. Simpson is a British native who attended LSU as an exchange student, and who years later returned to New Orleans to work in marketing for the McCrorys, specifically on the CoolBrew brand. Today, two coffee flavors Simpson has created — Coffee & Chicory and Café au Lait & Beignets — feature CoolBrew.

“I met Jeff and his family during my time at LSU and watched the McCrorys turn their business into a very successful operation, and I wanted to do the same,” said Simpson.

Simpson’s professional expertise is in marketing. But what he lacks in formal culinary training, he makes up for in passion, ingenuity and vision. He began New Orleans Ice Cream Co. in 2006.

“My goal is to make the best ice cream anyone has ever tasted,” said Simpson.

Like McCrory, Simpson is always on a quest for the next crazy idea, which led to the two longtime friends’ collaboration, Café Bar.

“Cold-brew coffee is such an ‘in’ thing, so why not combine it with premium, all-natural ice cream and put it on a stick?” said Simpson. Simply described, Café Bar is basically a coffee shell with ice cream in the middle. “It’s like having a coffeehouse in your freezer — all good stuff — and made with fair trade sugar. Any time of day, you can reach into your freezer and find six different varieties. Plus, it’s got enough caffeine to wake up a small donkey and only 150 calories!” Simpson exclaimed.