The Brides & The B’s: Bouquets & Boutonnières

A couple tying the knot on a cruise ship wedding at sea. Coachella-inspired flower crowns for the entire bridal party. A concrete balcony made to look like a lush, tree-filled orchard. An airplane hangar recast as a reception hall. When it comes to weddings, Rouses Floral Director Susan Sistrunk has seen it all.

With wedding season in full swing, floral departments everywhere are already kicked into high gear, working tirelessly around the clock to source and artfully arrange the best blooms for that special day. Sistrunk oversees the entire floral operation for Rouses Markets, a job that encompasses a wide swath of duties, from purchasing all of the flowers, dealing with a multitude of vendors and juggling last-minute requests to handling extravagant affairs for 400-plus people, decorating intimate receptions and quickly adorning soirées for sweethearts making 11th-hour dashes for the courthouse.

“We have people who walk in and say, ‘We’re getting married at City Hall in half an hour — what can you make for us?’” Sistrunk said. “People get married in barns, at City Hall, in churches and reception halls — there’s no right or wrong way anymore.”

Though the manner and traditions in which weddings are celebrated vary widely, the incorporation of flowers into the celebration is an enduring theme. Not merely decorative, flowers serve as a symbolic gesture of love and gratitude, with the different types and colors each carrying individual messages. It’s no wonder that peonies are so popular; the flower is said to represent so many wonderful things: love, romance, good fortune and a happy marriage. 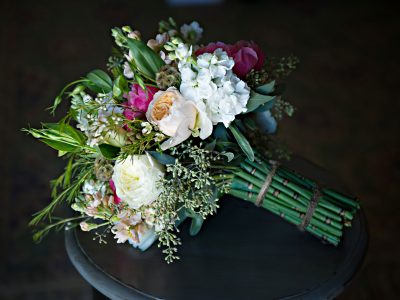 And flowers aren’t just for highlighting the big day; they also often come into play for events leading up to and even after the main event — like floral arrangements for the engagement parties, the altars, the reception and post-wedding brunches. The bridal entourage uses flowers for the boutonnières, the corsages, the ring bearers, the flower girls — or, in one woman’s case, the flower dog. LSU football fans have requested purple and gold blooms for the bride’s toss bouquet, and hopeful grooms-to-be often want the engagement ring they selected be threaded onto a long-stemmed rose before they pop the question.

“We do everything from the bridal shower to the first baby,” Sistrunk said. “We have girls who come into town for their bachelorette party and say they’re going down to Bourbon Street, and ask for something really crazy to wear when they go out as a group. We get some really crazy requests … but we do it!”

At a wedding a few years back at St. Louis Cathedral in the French Quarter, the bride and groom asked that their carriage include some of the wedding flowers for the trip to their reception. The floral team went a step further, decorating the entire mule cart with flowers while the bridal party was at lunch, even hand-tying dendrobium orchid stems through the mule’s bridle and around the tin cans dangling from the back of the cart.

Often, florists working on an event are tasked with maintaining a certain level of secrecy throughout the process. A couple of years ago, a florist in one of the Houma Rouses stores supplied the flowers for WE tv’s Bridezillas

During the episode — called “Cry Me A River” — the emotional bride, Callie, erupts in waterworks throughout the day, but in the end makes it down the aisle smiling, with her bridesmaids in vivid strapless coral gowns, carrying lush matching bouquets.

While the general consensus is that prepping for the big day should begin at least a few months in advance — to ensure that the correct flowers can be brought in on time — the Rouses florists are well-versed in the art of last-minute floral arrangements. And though the department’s focus is on supplying the wedding party with every bloom they desire to the best of their ability, it’s also to counsel, to offer recommendations and suggestions when a particular flower requested might not be the best route — or might not be in season.

“One woman came in and wanted all her bridesmaids to carry magnolias — well, magnolias only last a day or so,” Sistrunk said. “It’s not a flower you can cut and put in a bouquet.”

Instead, the florists suggested using a fresh magnolia leaf with a silk magnolia flower.

“We’re always giving suggestions, because people will see something on Pinterest and ask for that, but they don’t know that it’s not real,” Sistrunk said. “The florists are good at trying to lead them in the right direction.”

An always popular bridal wish is for peonies, which are only available at certain times during the year, and which are often flown in from Israel, requiring a long and costly trip. When peonies are available, the florists do everything they can to satisfy that request, but they often suggest garden roses, whose tight, circular blooms and large petals are a welcome — and less expensive — substitute.

Sourcing the flowers, as well as the greenery, trees and shrubs, involves a varied approach that utilizes everything from small-scale local vendors to massive greenhouse operations in South America. Flowers arrive on trucks from California and via plane from Bogotá, Colombia, where the booming floral business ensures that plants and flowers are available for export year-round.

The florist’s paramount concern is, of course, the happiness of the wedding party. As the desires and requests made by many brides have increasingly become multifaceted and non-traditional, creativity and a willingness to think outside the box are key.

The stories are abundant and diverse: There was the woman who asked to have her grandmother’s brooch incorporated into her bouquet, and the purple-haired bride who asked for all black calla lilies. There was the bride who wanted nothing besides a bundle of peacock feathers, and the same sex couple on their way to the justice of the peace who asked for a multihued rainbow bouquet. And the couple that got married on Halloween, when the woman — dressed as the bride of Frankenstein — insisted on having red roses spray-painted black.

Wedding trends have never been more fluid or versatile than they are right now. Bridal magazines, once the go-to for brides looking for inspiration, are no longer the standard. Today, brides-to-be are more likely to get inspiration from social media sites like Pinterest or by searching for a creative concept in the river of photos posted by friends and relatives on Facebook and Instagram.

A couple of years ago, the all-natural, barn-house wedding trend included bouquets wrapped in burlap; before that, an all-white approach dominated the matrimonial sphere, with brides often asking for baby’s breath bouquets and simple, hand-picked floral arrangements.

The long-running trend of all-white weddings — really, for all memorable events — recently has shifted to a much louder palette, demonstrated by big splashes of color and an emphasis on bold blooms, textures, fillers and greenery. No trendsetter has embodied this more than Beyoncé, whose pregnancy announcement last year showed the superstar dressed in a pale green veil in front of a multicolored floral backdrop. Wedding planners everywhere took note, and a notable shift was felt in the industry.

In this spirit-of-the-new, couples are now embracing large-scale floral installations, often interspersed with balloons, with many brides seeking “Instagrammable” moments for their engagement parties and bridal showers, said Jack Kane, a New Orleans-based wedding planner and the chief operations officer at Sapphire Events.

“Trees are really in, and treelike arrangements,” Kane said. “People are really loving that look also for weddings in a ballroom (setting), where they want to bring the outside in.”

“I’m also seeing a lot of people who are really into bold colors — in particular, a deep red. That used to not be the case; it was all white, for everything,” Kane said.

Arguably the biggest trendsetters for the industry are celebrities and their widely publicized nuptials. In the aftermath of Kate Middleton’s royal wedding, brides everywhere began requesting lily of the valley bouquets at their own celebrations. The trend continues with the most recent royal nuptials of Meghan Markle and Prince Harry: When Markle walked down the aisle carrying a petite selection of flowers handpicked by the groom from their private garden at Kensington Palace, prospective brides-to-be once again paid close attention.

Markle’s bouquet, a modest assembly of sweet peas, lily of the valley, astilbe, jasmine and sprigs of myrtle, came bundled together with a simple raw silk ribbon. The bouquet’s tour de force, however, were the forget-me-nots, which were Princess Diana’s favorite bloom. Since the wedding, Kane said he has already received several requests from clients looking to replicate Markle’s wedding style.

No demand is too big or too small, and the floral teams often pitch in with a lot of the delivery, display and decorating at the events.

At a wedding in Thibodaux, which was held in an upstairs space with a large open balcony, greenery ruled; the bride wanted the mostly concrete exterior to look like a backyard, so the floral department got to work, transforming the area into a lush, outdoor oasis.

“I had to go select these 50-gallon trees from a nursery and have them delivered — big, spiky trees to make it look like a garden,” Sistrunk recalled. “It was in the middle of the fall but (the bride) didn’t want any fall colors. Just because it’s the season doesn’t mean those are the colors that the bride wants. So you’re always chasing around, trying to find the colors that they want.”

Paula Pizzitola, who works in the Mandeville store’s floral department, fondly recalled a wedding at Benedict’s Plantation where the bride didn’t shy away from color: “She wanted all fall colors — red, bronze, orange, yellow, purple and a touch of blue with some gold accents,” Pizzitola said. “At first, we were worried that all of the colors would be too much, but once we put the bridal bouquet together — along with the bridal party’s bouquets — we were very pleased with the end results.” So was the bride, who called to gush and lavish praise on the florists after the wedding.

Weddings in different areas tend to follow their own set of trends. The florist at the Mandeville store handles most of the North Shore weddings, which often include a lot of garlands and more classic settings, while the Baronne Street store in New Orleans’ Warehouse District often handles nuptials on the cruise ships docked nearby on the Mississippi River.

Though floral trends are eternally in flux, roses always seem to be the flower of choice for a marriage at sea, Sistrunk says.

“Nothing stays the same, but roses are always there. It’s a timeless flower.”