Big Mike Lewis, pitmaster and owner of Big Mike’s BBQ Smokehouse in Houma, believes in patience, family and the kind of good barbecue that’s worth studying for a lifetime.

Lewis grew up in Florida and learned about barbecue eating at places like Big John’s Alabama BBQ in Tampa, an open pit barbecue restaurant founded in 1968 by the late Rev. John A. “Big John” Stephens and still run by the Stephens family. “There’s generations of barbecue knowledge there,” Lewis says. He ate barbecue wherever he could find it and became a dedicated student of the old joints that dot Texas and the Gulf Coast. “I guess barbecue got in my blood.”

After years in the Sunshine State, Lewis and his wife, Judith, moved to Houma in 2007 so they could be near his father, Harold Lewis, who had recently retired from running a mechanic shop. “Pop was 75 and I just wanted to spend time with him. Louisiana was calling my name.”

The couple decided to open a restaurant and soon found a spot on the West Side of Houma — a former Tastee Donuts — and Big Mike’s BBQ Smokehouse opened for business.

Like Big John’s (their inspiration in Florida), Big Mike’s was a family affair fueled by hard work and cooperation. Some parts of it never change — even after a long day of tending fires and serving folks, someone has to rise well before dawn to light the pits.

And for years, that job fell to Big Mike’s dad.

“Dad would get up so I didn’t have to. He knew I was already working 12 to 14 hours a day. That man always had my back.”

The Lewis men worked side by side to build the restaurant. “Dad didn’t take a salary the entire time he worked with me. In 2012 I retired him. I said, ‘Dad, the train is moving; this is your stop. It’s time for you to kick back and enjoy your life.’ I sent him a retirement check every single week, but he never spent a single cent.”

Things ran pretty smoothly until an electrical fire totaled the West Side restaurant. Lewis scrambled to find a new spot, eventually relocating to a Shell gas station right by the Rouses Market in the Village East Shopping Center. “A gas station wasn’t our first choice for a barbecue restaurant, but it actually ended up being a good location for us,” he says.

Lewis eventually moved from the old station to a new outpost on Barrow Street, and now he’s planning a second location in Thibodaux.

He’s also created his own line of barbecue sauces, rubs and fully cooked sausages, which he debuted at Rouses. “We made a barbecue rub, which is for brisket and pork, and a poultry rub, which we use for grilled chicken and smoked turkey. Our original sauce is a savory sauce, then we have a sweet heat version.”

Every pitmaster dreams about having his own line of food, but what was it like for him to see his vision come true? “When I actually walked in and saw my products on Rouses shelves? Well, I can’t begin to describe how great that felt. I’m at Rouses every day, and I still get excited when I see my stuff.” 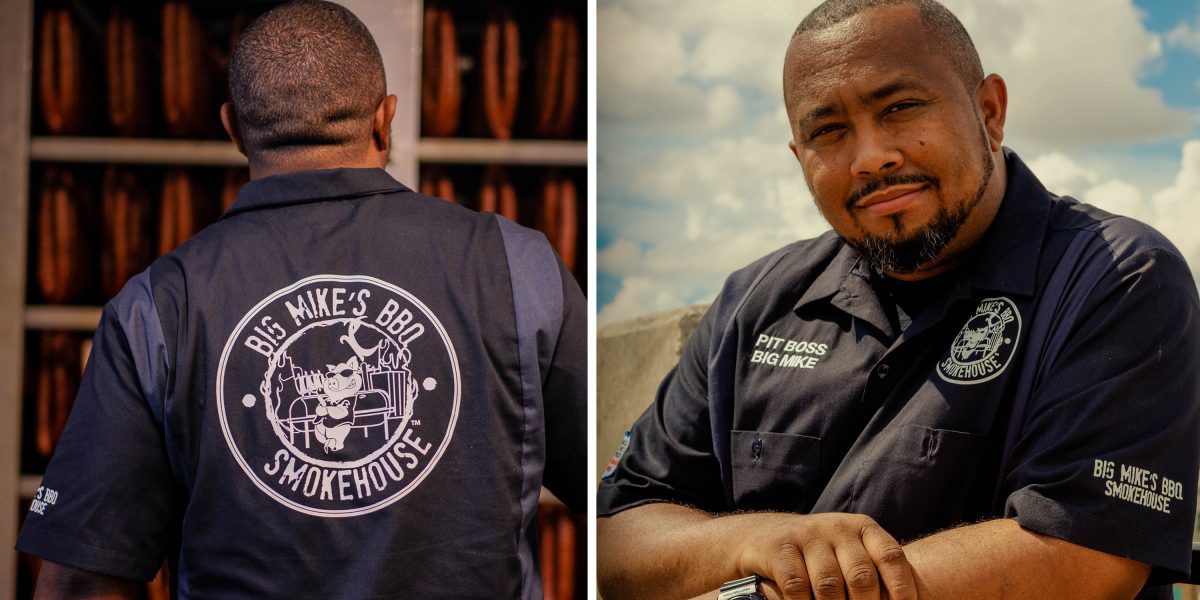 Tim: A lot of people are fearful of slow-smoking large cuts of meat like brisket. It’s not as simple like throwing a couple of Rouses steaks on the grill.

Mike: We can do 10,000 to 15,000 pounds of brisket a month. We use the whole brisket, but can get a pre-trimmed brisket (Rouses sells both). Prep couldn’t be easier. With good-tasting beef, you only need a rub, or even just salt and pepper, which is what they do in Texas. The point is you want beef to taste like beef — you wouldn’t want to cover up that good flavor.

Tim: I cook brisket on my Big Green Egg with your rub. It’s a two-day process for me, which involves cooking overnight, low and very slow.

Mike: At home I cook on a pit at 225 degrees. In the restaurant, I can dial it in lower — at 190 or 200 degrees — because I have more time. A whole brisket takes me about 16 hours, cooked indirectly over a wood fire. Sixteen hours is just enough time for that fat-crisped outer bark to build.

Tim: People get freaked out the first time they do a brisket and see that crust turning black.

Mike: They just don’t know how pretty it is on the inside. That smoke ring (layer of dark pink) is just under the crust.

Mike: If you want to fast-cook it, you do it at 250 degrees. But you have to introduce some moisture, so you put a little pan of water underneath it to lessen the heat’s impact on the meat. You want the pan between the fire and the beef. Myron Mixon won Memphis in May’s — first place in brisket and Grand Champion — and he fast-cooks his brisket in a “water smoker.”

Tim: Now Mike, here’s where I’m a champion: ribs. I won Rouses Big Green Egg Cookoff a couple of years ago. Lately I’ve been putting our beef short ribs on the smoker. (Short rib is like brisket on a bone.) I put some of your rub on those ribs, then smoke them at 250 degrees for about eight hours.

Mike: I have a better way, an easier way. You should actually smoke the short ribs after you’ve cooked them. Start with a small pan. Add the short ribs, season them with Big Mike’s Rub, throw in some chopped onions, a few bay leaves.
Put a couple of the bay leaves in the bottom of the pan and a few on top. You don’t need any liquid. Wrap the pan in foil and cook in your kitchen oven for 4-5 hours at 225 degrees. Transfer the ribs out of the pan and into the smoker and cook them for another hour and a half. The bake makes it easy, and the ribs get a lot of flavor without spending all day on the smoker. And you talk about bay leaves making a huge difference …

Tim: Do they get a sauce?

Mike: You want a mustard sauce for beef short ribs. Go 2:1:1 with the ratio — two parts Big Mike’s BBQ sauce, one part mustard, one part honey. Serve it on the side or add it last minute. Be careful with the sauce. You never want to put sauce or honey on meat when you cook it until the very end, say the last 15 minutes or so. A sweet, thick sauce will burn and get bitter if you put it on too soon. Once the sauce is on, watch it close for burning.

Tim: Finally, let’s talk turkey. You smoke them year round at your place.

Mike: A good smoked turkey is different from your usual Thanksgiving turkey, which can be dry. You might need gravy on that Thanksgiving turkey, but smoked turkey can be a whole other bird. At Big Mike’s, we brine our turkeys overnight to get the best flavor out of them, then rub them with fresh herbs, spices and a salt. Then we put the rub on before we smoke them. I promise you, you’re gonna ask for seconds of my turkey.