If you were to travel to the headwaters of the mid-century tiki movement — in an outrigger, obviously, with a torch in one hand and a rum drink in the other — you’d discover that you’d arrived in the New Orleans of the 1920s.

Ernest Raymond Beaumont Gantt — the man who single-handedly launched the tiki trend (sometimes called “Polynesian pop”) — was raised in Mandeville and New Orleans by his grandfather, a raconteur and rum runner who also ran a legitimate import-export business.

Gantt was smitten by the exotic world of New Orleans and the West Indies, which he discovered on sailing trips with his grandfather. As a young man, he opted to travel the world rather than attend college, and finally washed ashore for a spell in Los Angeles. In 1934, the year after prohibition ended, he opened up a small bar called Don the Beachcomber’s. He served flamboyant, tropical-inflected drinks made of rums and fruit juices. He decorated his place with stuff he’d foraged on his travels and collected around town — blowfish lamps, rusty anchors and woven grass mats adorned the walls.

His raffish bar attracted Hollywood actors and writers, and soon attracted another breed: copycats. Among them was a man named Victor Bergeron, who in 1937 would convert his Oakland restaurant, called Hinky Dink’s, into another South Pacific fantasy world. He named it Trader Vic’s.

And so tiki — a style named after South Pacific statues depicting the otherworldly — grew and blossomed, soon establishing itself as the American rococo. It was as if the Florentine and Baroque ages had honeymooned on a Thai bus while quaffing high-proof cocktails and had a baby. Customers often entered a tiki temple through a grotto, crossing a bridge over burbling waters to let them know they were departing the familiar world. Most lacked windows — no one wanted to be reminded of the gray and gritty present or dine with a dispiriting view of a parking lot. Inside it was faux parrots and fake thunder, hula dancers and flaming cocktails. Tiki fully embraced the motto, “If it’s worth doing, it’s worth overdoing.”

Which was also the philosophy of the drinks. Tiki drinks had names that sounded like a map of a Pacific archipelago: Nui Nui, Pago Pago, Aku Aku Lapu. They were served in water buffalo horns and tiki heads and volcano bowls sputtering with blue flame. The drinks also had one other characteristic: Most were outstanding. They were made with fresh fruit juices and top-shelf rums; many places mixed a variety of rums in a single drink, with each bringing its own distinctive character to the drink.

Tiki established its roots before World War II, but it wasn’t until the war ended and squadrons of sailors and soldiers returned from the South Pacific that it hit its stride. This was the age of “High Tiki,” when the fanciest restaurants with the most sought-after seats were adorned with thatch, where a gong sounded when the “famous mystery drink” was served. (The menu of a famous tiki bar and restaurant in Columbus, Ohio, helpfully noted that the serving “symbolizes an ancient sacrifice, which reportedly stopped volcanoes from erupting.”)

New Orleans had its own tiki temple, of course — the Bali Ha’i, part of the Pontchartrain Beach amusement park, which served Mai Tais and other exotica from 1958 well into the 1980s. It was launched by Harry J. Batt, Sr. (grandfather of local notables Bryan and Jay Batt), who created the park, naming his restaurant after a song in South Pacific. It was also about this time that Pat O’Brien’s became more widely famous for its Hurricane, which they’ve served since the 1930s. The Hurricane isn’t technically a tiki drink — after all, it’s not served in a tiki bar and doesn’t stop volcanoes from erupting. But it soared in popularity in the 1950s and 1960s, and ordering one before you even unpacked your suitcase became a traveler’s right of passage.

Tiki put the “life” in “lifestyle,” but it was soon eclipsed. A new generation was less interested in drink and more fascinated by other intoxicants, trading tiki mugs for rolling papers. Many of the tiki joints that survived did so by cutting corners, using cheap rum and canned juices, then hiding it all under a small, colorful parasol. Like a lost Atlantis, the tiki world slipped beneath the waves.

The good news? Tiki is back. Tiki temples have opened in the past few years in cities like San Francisco, Chicago and both Portland, Maine and Portland, Oregon. And they’re attracting attention not through the knowing wink and a forklift full of kitsch, but via their outstanding drinks — some made with eight or more ingredients, allowing visitors to rediscover a lost world, one sip at a time. 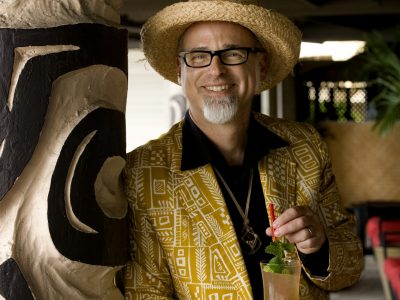 Virtually everyone who’s embraced the recent tiki revival credits one person with bringing it back: Jeff “Beachbum” Berry. A Southern California native who was making a living as a screenwriter in the 1990s, he spent several decades tracking down the secret recipes for drinks served in the sacked temples, interviewing retired bartenders and decoding notebooks filled with secret recipes. Berry published his research in six books, which have attracted a devoted following. (Virtually every tiki bar that’s opened in the past decade relies heavily on Berry’s rediscovered drinks.)

Several years ago, Berry and his wife, Annene Kaye, returned to the headwaters of tiki. They moved to New Orleans and two years ago opened a restaurant and bar in the French Quarter, not too far from the Rouses Market, called Latitude 29. Located on the ground floor of the Bienville House Hotel, it’s a portal not just into another world, but into a lost American past. There’s a stylized map of the tiki world marked by barware over the back bar and a vitrine displaying Berry’s collection of tiki artifacts from the golden era.

And then there are the drinks. Berry’s cocktail menu includes classics like the Missionary’s Downfall (1948), Nui Nui (1937) and Suffering Bastard (1942). He’s recently added the popular Jet Pilot, which he rediscovered when researching the Kon Tiki chain of restaurants popular in the late 1950s and early 1960s.

Berry’s capable bar staff serves another notable vintage drink, but don’t look for it on the menu. It’s the General Patton’s Tank, and if you ask for it you’ll get a re-creation of a tasty drink once consumed by the gallon at the Bali Ha’i on Lake Pontchartrain. Berry got an enticing but incomplete recipe from Jay Batt and filled in the gaps, tweaking it for contemporary tastes.

It turns out, you can go home again.