Porters and stouts — they’re both dark beers, and they sometimes seem to be interchangeable. But what makes a stout a stout and a porter a porter?

Well, the porter came first, back in the early 18th century, around the time of the Industrial Revolution in Great Britain. It was the first widely made commercial style of beer, and the name derives from its popularity with the working class “porters” who delivered goods from the docks all over the cities and towns. Although the color is dark brown, it is still very mild-tasting, with a softer, lighter mouthfeel than most stouts and a fairly low alcohol by volume (ABV).

The British porter has evolved over the centuries into a variety of styles, including robust porter, which contains a bit more bitterness and roasted notes than the original; American imperial porter, which has a higher ABV but still has no bitter or black malt characteristics; and the Baltic-style porter, a high-alcohol, deeply flavored style produced by cold-fermenting, or lagering, for a longer period of time.

Some say that the flavor profile of the Baltic porter essentially makes it a stout — which is basically a bigger, badder porter with more intense, roasted flavors. The name for the style came from Guinness, which called one of its first products a “Stout Porter.” The styles have evolved separately since then, with stout styles ranging from milk/sweet English stouts, Irish dry stouts and oatmeal stouts to American stouts and Russian imperial stouts.

Although, historically, the term “stouts” has referred to stronger porters, nowadays stouts can be low-alcohol, mild and not “heavy” on the tongue, but rather silky and well-rounded. The main difference between the porter and the stout that can be consistently pointed to is darkness of color. Stouts are generally black, while porters are usually dark brown with ruby highlights, a difference that seems negligible until you hold a glass of each up to the light.

Stouts also use unmalted but deeply roasted barley grain (in a process similar to the way coffee beans are processed). It’s the roasted barley that both gives the stout its trademark dark color as well as the chocolate and coffee notes that are naturally occurring in stouts, even if there’s no actual chocolate, coffee or vanilla added to the beer. For this reason, it’s common for stouts to be accentuated with those ingredients. And with porters, adding coffee or other ingredients rounds out the flavor profile which are, in general, a bit lighter than stouts.

The fact that coffee beans and the specialty grains for these dark beers are roasted in a very similar fashion is another reason they complement each other so well. And beer drinkers can harness the power of coffee’s caffeine to counteract the sleepiness that can accompany a session of beer drinking. Coffee also can add a unique element to any beer, since there are hundreds and hundreds of varieties of beans by region and roast.

Thibodaux’s Mudbug Brewery brews a play on the classic coffee drink with its Cafe Au Lait milk/sweet stout, made with cold brew Community Coffee Breakfast Blend and milk sugar. And Parish Brewing out of Broussard has collaborated with Lafayette coffee shop and roaster Rêve Coffee Roasters to create a strongly flavored coffee stout that is almost like a pint of iced coffee, with the bitterness of both the grains and the beans perfectly complementing each other.

Chafunkta Brewing in Mandeville has a flagship beer, Old 504, which is a robust porter infused with coffee from Orleans Coffee Exchange and vanilla from Ronald Reginald’s Vanillas. Although the flavors created by the brewing and additives are rich and decadent, it’s still a great beer to drink in the summertime.

Shiner/Spoetzl Brewing celebrated its 108th birthday with a limited release of Cold Brew Coffee Ale, which, though not labeled as such, was actually a lighter porter made with Austin-based Chameleon Cold-Brew coffee.

Sam Adams’ Nitro beer lineup includes a Nitro Coffee Stout that uses a combination of Indonesian Sumatra Mandheling and Indian Monsoon Malabar coffee beans. The Indian Monsoon Malabar beans are aged in a process reminiscent of the bygone days of importing and exporting, when the sun never set on the British Empire. The roasters re-create the humid wind and rain that would affect a boat sailing in monsoon season for three months or so. (This is actually not even the craziest way people age their coffee beans; just look up “civet coffee” and you’ll see what I mean.)

Wiseacre Brewing (from Memphis) and Left Hand Brewing (from the Boulder, CO area) are new additions to the Gulf Coast beer market; both bring well-regarded coffee beers for us to enjoy. One of Wiseacre’s most popular beers is a coffee milk stout called Gotta Get Up To Get Down, made with coffee beans from the Konga region of Ethiopia. Left Hand’s Hard Wired Nitro coffee porter is another beer packaged in the bottle with nitrogen (like Sam Adams’ beer discussed earlier) for a creamier consistency when poured quickly into a glass.

Bringing together two of the world’s favorite beverages is nothing less than genius. And the collaborations between microbreweries and small coffee roasters are great for communities, creating amazing opportunities for combining hundreds of flavors with the complex interplay between coffee beans, hops and grains. 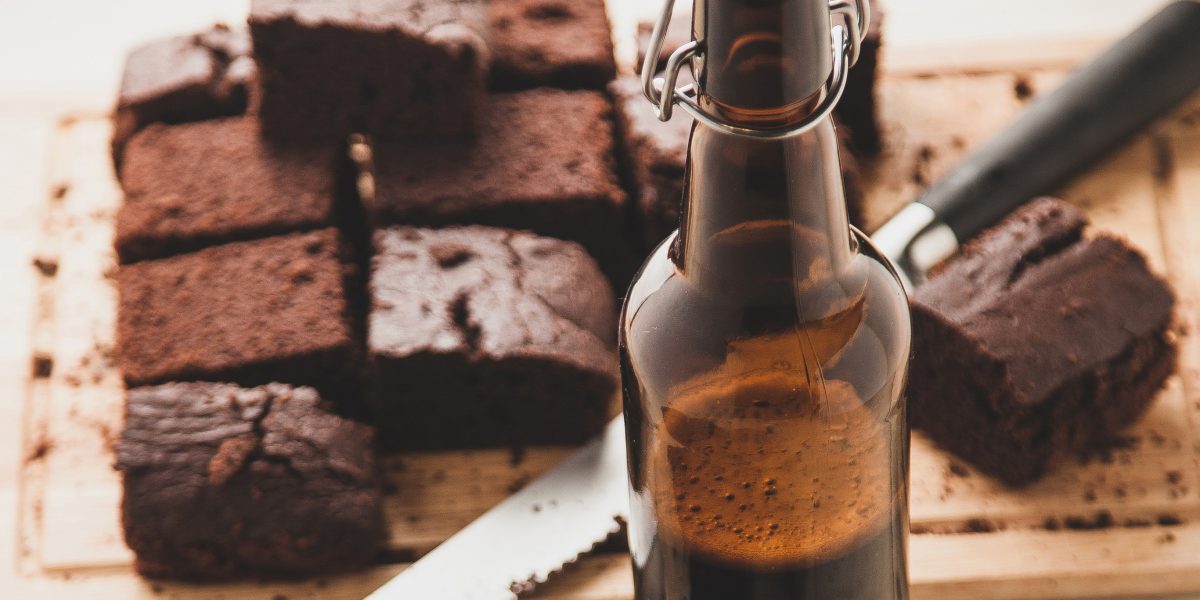