The legendary Dew Drop Inn in Mobile, Alabama, occupies a squat, chalet-style building at the corner of Old Shell Road and Kenneth Street. 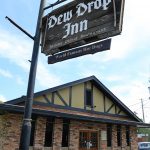 The setting is cool and comfortable, a wood-paneled roadhouse of laminate

tables with little flower arrangements in Coke bottles on partitions between booths.

The Dew Drop Inn bills itself, and accurately so, as the port city’s “oldest restaurant.” “It’s an institution, not just a fun place where locals like to go time and time again,” says Lesley Anderson, who resides on the city’s west side.

The eatery dates back to 1924, when George L. Widney opened a small sandwich shop on S. Ann Street near Government Street. Alabama food lore states that Widney’s restaurant introduced the city to the sandwich called the hot dog. It was so popular that, 15 years later, Widney was crowned the “Hot Dog King” by the Mobile Press-Register.

Widney opened a second location on Old Shell Road, but soon sold the restaurant to Arthur Reid, who relocated the business, moving it away from a school in order to obtain a beer license. Reid brought in Jimmy Edgar as business partner, and in 1966, after Reid’s passing, Jimmy became sole owner. A remodel a year later resulted in the ambiance customers still enjoy today.

Eighty years later, the Dew Drop Inn is described as a constant in a changing world.

“A step inside the Midtown landmark and it is easy to see that this is a place to see and be seen — active, alive, rich with familiar interaction between patrons and the wait staff. Regular diners make up a large portion of the Dew Drop Inn’s business, and they usually know what they want to eat before they get settled in,” says Mobile resident David Holloway. And he should know, since he’s the food writer for the Mobile Press-Register, the area’s newspaper. “For several generations, the Dew Drop Inn has been the nexus of dining in Mobile,” Holloway states.

Current Dew Drop Inn owner Powell Hamlin has estimated that as much as 85 percent of their business is from folks who have been there many times before. Rumor has it that the Dew Drop Inn inspired Jimmy Buffett’s hit “Cheeseburger in Paradise,” but that has never been confirmed by the singer/songwriter himself. Buffett grew up in Mobile and wrote in his Parrot Head Handbook that his “burger lust was formulated” at the restaurant. He was spotted there as recently as January 2017, while visiting his hometown.

As Holloway describes it, “The Dew Drop Inn is more than just an eatery, it’s a gathering place for generations of Mobilians anxious for a taste of home.”

Tara Zieman, another Mobilian, describes the “Dew Drop,” as she calls it — no “Inn” necessary in her vernacular — as “quintessential Mobile. Generations upon generations go to the Dew Drop,” says Zieman. “My grandparents took my parents there, and I now go there with my grandparents. It is Mobile.”

Zieman describes the place as warm and fuzzy, adding that nothing has been updated, but in this case, it works.

“Everything about it is original, nothing fancy, but it is perfect,” she says. As for the wait staff, Tara says they are always gracious, no matter how busy they are. “It’s a special place in our city. Everyone has been there, and if you haven’t, you just have to go.”

“We’re proud of everything we do here,” Hamlin said, after another busy day was starting to slow down. “We’re more than just a business. I would like to think we’re a huge family taking care of each other.”

Buffett may have been inspired by the restaurant’s cheeseburger, but it’s the hot dog that locals crave. “Every Mobilian owes it to himself to eat at least one every so often,” says Holloway.

Keeping it simple, the “World Famous Dew Drop Inn Hot Dog” is served with chili, sauerkraut, mustard, ketchup and a pickle slice. The “Upside Down Dog” is not a yoga move here, but a hot dog served with sauerkraut, chili, mustard and ketchup on the bun, with the weiner on top. Want it “shaved”? That’s a version served without kraut. The “All the Way” is just what it sounds like. If a po-boy style sandwich is more suited to your taste, the same style dogs can be served on French bread.