Bill Goldring is on a quest. “I’m in search of the Holy Grail,” he says, with a mischievous grin.

But unlike the stuff of Arthurian legends —where the Holy Grail is usually a cup filled with food in infinite abundance— Goldring’s vessel would be brimming with the perfect whiskey, ideally one that would come from one of the many distilleries that are in his own current portfolio.

William Goldring, known to everyone as “Bill,” is from the third generation to lead the family in the beverage alcohol business. His grandfather, Newman Goldring, was in the business in 1898 in Florida before Prohibition. Newman’s son, Stephen, was born in Pensacola, Florida in 1908 and moved with his family to Chicago during Prohibition. Following the repeal of Prohibition in December 1933, the second generation Goldring returned to Florida in 1939, opening a small wholesale liquor distributorship.

In 1944, Stephen Goldring expanded his business into New Orleans, a city known for its love of all things spirits, founding the Magnolia Liquor Company, a wholesale liquor company, with his long-time business partner, Malcolm Woldenberg. The two had become acquainted when the Canadian-born Woldenberg, one of the first employees of Seagram’s distillers in the United States, paid a sales call to Goldring. Seagram was Montreal-based at the time.

Among the partners’ earliest acquisitions was the Sazerac Company in 1949, one of the oldest family-owned business in New Orleans, dating back to 1850s.

Both men, steeped in the philosophy that to whom much is given, much is expected, created foundations to support civic endeavors to serve the greater good.

A Family Business is Born 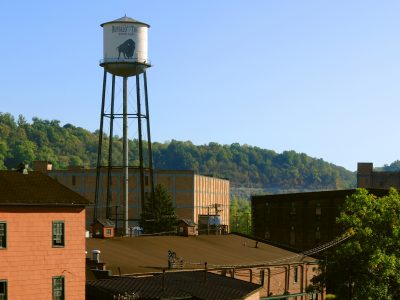 “I’ve never thought of doing anything else,” says the third generation Goldring, recalling his desire to work for his father in the family business. The father insisted the son first get a college education, and so Bill did, finishing Tulane University in three years, a business degree in hand. He honed his beverage skills for a year, working for Seagram’s in New York, New Jersey and Maryland, always with an eye on returning home to work under his father’s tutelage.

And so he did, and within five years the younger Goldring had earned the role of executive vice president of Magnolia, responsible for all day-to-day operations of the growing company. He assumed the role of Chief Operating Officer in 1972 and renamed the company Magnolia Marketing Company, while growing and expanding the company’s holdings. He succeeded his father as president in 1982 and was named chairman of the company in 1991. He also was named chairman of the Sazerac Company. Under Bill’s leadership and vision, the businesses experienced unprecedented growth and acquisitions, eventually evolving into one of the nation’s largest and most successful wholesale liquor and distribution companies.

Along the way, there were corporate name changes and mergers as well, and by 2006, Goldring’s business interests were under the banner Republic National Distributing Company.

The year 2010 found Goldring reevaluating his future, and he shifted his attention to The Sazerac Company, which had experienced steady growth since his father’s days at the helm of Magnolia. Goldring wanted to strengthen his acumen as a distiller. At a time when most men of his age may have considered retirement, perhaps to perfect his already sharp skills on the tennis court, Goldring immersed himself in his newest business interests. And the quest for the Holy Grail continued.

Today, bottles of Sazerac brands line shelves of retailers across the nation and the world.

“As a distiller you sell your own brands, and as of today we produce over 300 brands, and are in all 50 states and over 100 countries,” Goldring says, his modesty on display as he delivers this statistic with his trademark unassuming manner. And his holdings continue to grow; The Sazerac Company is one of America’s largest distillers, and still proud to call New Orleans home.

“It’s eat or be eaten,” he says, explaining a part of his business philosophy. “I’m always looking for opportunities to expand, especially abroad, to have as much business outside the United States as in, and we are getting there.”

And in January 2016, The Sazerac Company resurrected the beloved Ojen (pronounced O-hen) brand, a sweet, anise-flavored liqueur and long a favorite in New Orleans during Mardi Gras. Production of Ojen ceased at a Spanish distillery in the 1990s leaving the product out of the marketplace until Sazerac developed its own version.

Among the distilleries owned by Sazerac, it is the Buffalo Trace Distillery that whiskey writers from across the globe consider to be the best in the world, consistently recognized for its outstanding quality and innovation, and as such garnering world wide media attention. In 2013 Buffalo Trace Distillery was named a National Historic Landmark, one of only 2,500 designations in the United States. The attention is well deserved, and something Goldring has never taken for granted.

“You can’t just go out and open a distillery, as it takes a long aging process to make a good bourbon,” explains Goldring. “We are aging whiskey anywhere from three to 23 years, and there are dozens of formulas in the process. I am constantly looking for improvement in the product lines, never settling for anything less. Sometimes I believe it’s tough to create anything better than what we have, but we’re going to continue to work at it.”

Today, labels from Goldring’s deep portfolio are the top-selling brands in their categories in Rouses Markets across the South.

But the greatest benefit to the retail history with Rouses Markets rests well beyond the well-stocked liquor shelves.

While products from Goldring’s holdings have sold at Rouses Markets for generations, the two had never crossed until they met at an event both were attending. As Donald Rouse recalls, “Everybody was dressed immaculately except for me and this one other guy, both of us in our traditional, more casual clothes. And we just sort of gravitated toward one another and introduced ourselves.”

“Kindred spirits is how I describe us,” says Goldring, the two businessmen sitting at opposite ends of a sofa in an office above the Rouses Market on Baronne Street in New Orleans’ Warehouse District on a rainy afternoon.

“My father had recently passed away, and meeting Bill and gaining him as a trusted friend filled a void for me at a time when I needed it. All these years later, being able to pick up the phone and pick his brain on things is something I greatly appreciate. Bill has been an extraordinary presence because of his knowledge and his experiences.” 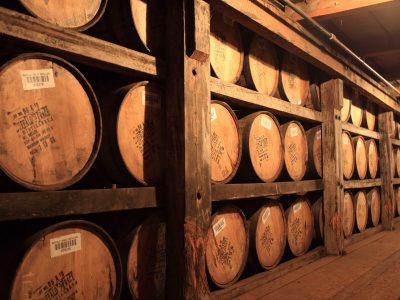 It was around the same time when Rouse was looking to expand his retail operations to include a location in downtown New Orleans, and he set his sights on acquiring the old Sewell Cadillac building on Baronne Street. But there were a few last minute hurdles Rouse was having difficulty navigating with regard to licensing and permitting.

“One phone call to Bill and he helped us get across the finish line and land the location, just as we were on the brink of losing the opportunity, and I’ll always value that support,” said Rouse. The market opened in November 2011 and has since garnered national attention. The Baronne Street location, it is fair to say, has spurred the burgeoning growth of the city’s business district.

“Our relationship is not based on business,” says Goldring. “We both share common passions for family and for our work, and neither of us are fond of letting grass grow under our feet.”

Among the things they share is the tradition of carrying on the family business. Donald Rouse and his brother Tommy inherited a grocery business started by his father, Anthony J. Rouse, Sr., in Houma, Louisiana in 1960. Today, there are nearly four dozen Rouses Markets across three states, with a reputation for supporting local products in all their stores, and employing nearly 6,000 people. And both are passing on the family tradition to a new generation.

“We feed off one another, especially because we both came up the same way, always knowing we wanted to follow in our fathers’ footsteps,” says Rouse. “We both grew up in that same way, and our fathers did well in their own right, taking businesses and growing them to be successes.”

“Although they were involved in different industries, our fathers taught us the same thing … to be a success takes hard work, to set a clear path but remember to have fun at the same time,” adds Goldring.

“It’s fun to be sitting at a bar with Bill and seeing someone sipping a drink made with Buffalo Trace or another brand Bill owns, and say to the person, ‘You know who owns that … this man right here,” laughs Donald, pointing to his friend at the other end of the sofa. “Bill is so friendly and down-to-earth, you would never know he is a worldwide leader in his business.”

Goldring describes his friend in a similar fashion.

“Donald is the original undercover boss, and when he walks around one of his stores, you can see that everyone loves him—customers and employees alike,” says Goldring. “He is not above anyone. There is no pretense.”

Their shared business culture—one of open door policies, approachable attitudes, strong leadership skills and rich family histories—also finds commonality in their devotion to their hometowns. Despite his worldwide business presence, Goldring has never thought of relocating his headquarters to another city. New Orleans is home. Rouse feels the same way about the Houma/Thibodaux area and the Gulf Coast.

“For me, there’s no other option,” says Rouse. An outdoorsman with a passion for hunting, Rouse also owns a small ranch in Mississippi where Bill is a frequent visitor.

“I do not hunt, and Donald doesn’t play tennis” laughs Goldring. “But we both enjoy a good meal.”

“We enjoy a great comradery, it is that simple,” says Rouse. He’s also had the opportunity to visit Goldring’s distilleries, sampling the aging whiskies, some of which are bottled specifically for Rouses stores. Donald’s son Donny, managing partner of Rouses Markets, hand chose the bottles.

Perhaps the most important thing that Goldring and Rouse share is a quiet passion for philanthropy.

Goldring continues to lead the Goldring Family Foundation and the Woldenberg Foundation, giving millions of dollars to enrich a broad list of educational, arts-related, religious, civic and health-related initiatives, and serving as a mentor to people and organizations alike.

“It’s always better to give than to receive,” says Goldring. “It’s something that was instilled in me by my parents as a young man … the idea that you can derive much happiness by helping others. I believe you must serve your community.”

“What I appreciate about Bill is that he is always in it for others, never himself,” says Rouse.

Rouse walks the philanthropic walk as well and is a big proponent of supporting local farmers, fishermen and manufacturers under the corporate mantra “locals supporting locals.”

He also shares Goldring’s philosophy of “eat or be eaten.”

“I compete with the largest grocers in the country,” says Rouse, “and Bill is the largest in his industry. Like Bill, I’m always trying to improve, always continuing to grow, working to keep up with the times and the trends. I believe we have gone from simply being a place to sell groceries to being a destination.”

Both gentlemen are in the right place at exactly the right time, and to be sure, wake up happy every day. And both have found the Holy Grail of friendship.