A patty melt is said to have started at the Hollywood drive-in Tiny Naylor’s, built in 1949. The classic version consists of a thin, flat-top hamburger patty, Gruyere or Swiss cheese, and caramelized onions griddled between two slices of rye bread. Variations include the diner-style patty melt, which is like a grilled cheese sandwich with a hamburger and griddled onions inside.

Melt 2 tablespoons of the butter in a large skillet set over high heat. Add the sliced onions and stir them gently to coat with butter. Cook the onions over high heat, checking on them every 5 minutes. Stir the onions and scrape up any fond that forms on the bottom of the skillet with a wooden spoon. Reduce the heat to medium and cook, stirring often, until the onions are fully caramelized, approximately 30 to 40 minutes. Season with salt and pepper and remove onions to a bowl; set aside.

Gently divide and shape the ground beef into 4 thin patties, roughly the shape of a slice of bread. Season with salt and pepper.

Decrease the heat below the skillet to medium. Place four pieces of sourdough bread into the fat that remains from cooking the patties. Top each piece with a slice of Swiss cheese, then a patty, then some caramelized onions, then a slice of cheddar cheese, and cover with another slice of sourdough. Use the spatula to press down on the sandwiches, then carefully turn over each sandwich to brown the other side. Cook until the cheese has melted and the bread is golden brown and crisp on both sides. Slice the sandwiches in half before serving. 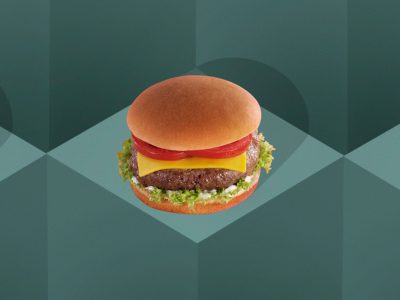