If you took a poll among New Orleanians as to what there favorite dish is, there’d be a variety of answers, but barbecue shrimp would come up — a lot. That’s no surprise — the dish is on many restaurant menus, and with good reason. But few would expected it to outpoll gumbo, crawfish bisque, or charbroiled oysters and other iconic New Orleans dishes.

A fair amount of history lies behind the popularity of barbecue shrimp. Its ancestor appeared during the most fecund years of evolution for Creole and Cajun cookery, from the last decades of the 1800s through the first years of the 1900s. The strongest force in those years was Italian, as large numbers of sailors, opera singers and cooks landed in New Orleans from Italy.

Barbecue shrimp is a variation of the classic Italian dishes gamberi fra diavolo (shrimp in the style of the devil’s brother) and shrimp scampi.

Both of those dishes are similar to barbecue shrimp, but the real dish and its misleading name were unknown until the 1950s. It was a long evolution.

Instead, what you get are big — but not too big — shrimp, usually served with the shells, heads, tails and claws still intact. They are cooked in a sauce that is mostly butter and black pepper.

Beyond those main elements, the recipes for barbecue shrimp are quite varied. Among common ingredients in the sauce are garlic, Worcestershire sauce, Louisiana hot sauce, lemon juice, white wine, beer and paprika.

If you ask me, the ingredients mentioned above add little to the flavor. Shrimp, butter and pepper are just about everything here. It’s one of those dishes where, the simpler the recipe, the better the results.

The essence of barbecue shrimp comes more from the technique of cooking it than the ingredients. The versions I think are the best — as well as my own recipe — include only four major moves around the rangetop. Here they are:

Pascal’s Manale’s Original Version: This recipe is a secret, never published as far as I know. However, on a few occasions I watched older cooks who had cooked at Manale’s (or were part of the family). I saw that they had a big pot full of the sauce, made with margarine, pepper and — most important — the juices that came from all the orders of barbecue shrimp cooked so far that day. It wasn’t a deep-fry, but more like a light boil in the margarine/shrimp-juice/pepper matrix. The shrimp were lowered into this pot and cooked until done. Now and then the cook would top off the margarine and pepper. Note that this method would be hard to re-create at home, which probably adds to the secrecy as well as the flavor.

Mr. B’s Version: Steam the shrimp in a covered pan with a small amount of watery liquid, moving them around until the shrimp are uniformly pink, but just barely. Shrimp cooked too long lose flavor, and overcooking can cause the meat to stick to the shells. (At last, what causes that problem is here defined.) Then you add the butter and pepper, and agitate the pan until the butter emulsifies into the liquid. This major breakthrough came from Chef Gerard Maras, whose idea this was in the 1980s.

The Big-Batch Version: Any more than two pounds of shrimp won’t cook well in the above approach. To cook a lot of shrimp, I use a baking pan about two inches deep, with all the ingredients uniformly distributed. Then I cook the shrimp in the oven at about 350 degrees Fahrenheit. This is the easiest way to make barbecue shrimp, but it is also the method most likely to cause overcooking.

Emeril’s Revolutionary Version: Almost all of Emeril Lagasse’s restaurants serve this style of barbecue shrimp, and they are major house specialties. They are already peeled and beheaded, yet the flavor is still there. What the Bam! man does is make an intense shrimp stock from the shells and heads, reducing this down till he has a sort of shrimp demi-glace. Butter and pepper are added to this flavorful stuff, and there it is. Not having to peel the shrimp is a big plus for a lot of people.

If you make barbecue shrimp that veers away from any of the four approaches above, it may be good, but it won’t be a certified classic.

The History of Barbecue Shrimp

The most often asked question at Pascal’s Manale Restaurant is, “What’s a manale?” The restaurant was opened in 1913 by Frank Manale. When he died, he left the restaurant to his nephew Pascal Radosta, who was responsible for making Manale’s (that’s what we locals call the place) into the popular restaurant it became. For 40 years, Manale’s had a big Italian menu, but there was no barbecue shrimp on it. Hard to imagine, that!

The dish’s invention came around 1954, when one of Manale’s regular customers buttonholed Pascal Radosta to tell him about an exciting dish he had just experienced in a restaurant in Chicago. It was nice big shrimp sloshed around in butter and herbs, he said — but he couldn’t remember the dish’s name. The man asked Pascal whether they could make the dish for hm. Pascal said they’d give it a shot. He went into the kitchen and explained the request to his brother and chef, Jake Radosta. Jake checked a few of his cookbooks and made a dish somewhere between scampi and fra diavolo. The customer said that what Jake had made was different from the Chicago dish, but he liked it even more.

“What is that man eating?” said some of the other customers. Next thing, the place was filled with people wanting the new shrimp dish. It quickly became the entree ordered by half of the diners on any given day. It got its name of barbecue shrimp a few days later. It was the best anybody could think of, thereby kicking off 50 years of confusion and good eating at Manale’s.

Just remember this: In your travels around America, when you see something like “New Orleans-Style Barbecue Shrimp” on a menu, it is critically important that you ask, “Is there any barbecue sauce in this? Like the kind you’d put on ribs or brisket?” If the answer is yes, move on to the next entreé, or perhaps to another restaurant. There are few worse dishes than what I just saved you from. 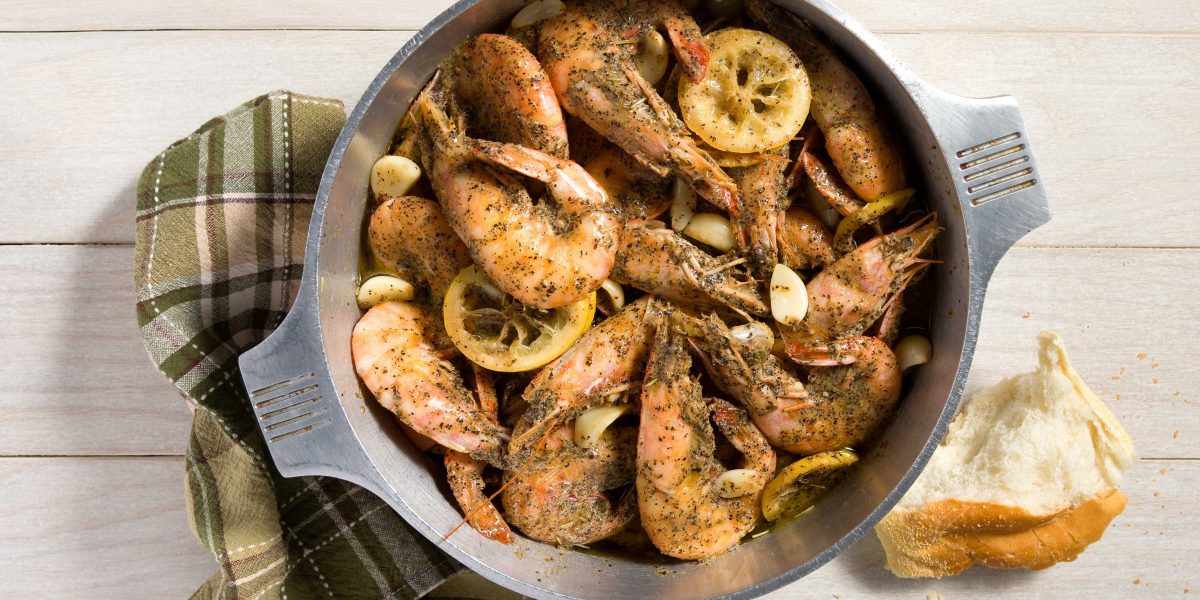