We all know that capital cities across the globe are where the politicos do their hobnobbing and cultural landmarks abound. (The Louvre, anyone?) For those of us who are constantly hungry, though, they also often serve as integral touchstones for the culinary scene of their state or country. Who could possibly think about heading to Austin without digging into the most novel spins on barbecue, or daydream about Madrid without wondering what tapas the mad scientist-style chefs are whipping up these days? Answer: No one.

Now, in Baton Rouge, a new generation of food innovators are ready to make their beloved town the next spot that’s a primo food and drink — ahem — capital for locals and hungry travelers alike.

“We want to be a food capital city among capital cities,” chuckles Ryan Andre, a Gonzales native who (among other endeavors) pushed the envelope as the former head chef for City Pork Hospitality Group. One bite of any dish he whips up — from saffron rice arancini stuffed with smoked pork to duck ham pasta — and you’ll see why he’s become a leader of the Baton Rouge culinary new school. “It’s time to replace some of the chain restaurants with places where chefs really get to shine,” he says.
Welcome to GastreauxNomica, Baton Rouge’s culinary “think tank” and underground test kitchen, where chef-driven dining is the name of the game.

Sound a little off the beaten path? Good! That’s just how they like it. Andre and ringleader Sean “Poochy” Rivera of Driftwood Cask & Barrel are the co-founders of this novel approach to dining in a city long focused on restaurants themselves, not the people in the kitchen making it happen.

“Chefs spend so much of their lives in the kitchen, away from their families and out of the spotlight,” Rivera explains. “We want to showcase the people who put in the sweat.”

Rivera is a New Orleans native who relocated to Baton Rouge after Hurricane Katrina and recognized the potential for a city that, by and large, has been heavily rooted in traditional dishes. Today, the self-designated team of “rebel chefs” (along with a handful of bartenders, bloggers and other culinary entrepreneurs) are using pop-ups, new companies and their own in-house menus to introduce guests to Louisiana flavors reimagined in an entirely new light.

“We really have the best audience for trying new things,” he explains.

With their collective brainpower and dynamism, it’s not difficult to imagine the group tinkering around in a secret bunker into the wee small hours, taste testing and mixing their way into new frontiers like some kind of bland-food-fighting superhero league. Need someone to make the most innovative mac ‘n’ cheese of your life? A Gastreaux Hero is on the way. Want a party catered with oysters prepared in topsy-turvy, delicious ways? GastreauxNomica powers, unite! These are the kind of brainy, rowdy, charismatic people you want to have a beer (or three) with at the end of the night.

“Something I know what drives us is this feeling that if people say we can’t do it, we’re going to try and prove them wrong,” says Matt Vondenstein, the mastermind behind the drinks program at Driftwood and a cocktail-innovating machine. Vondenstein isn’t afraid to be playful with his drink construction, swizzling up tipples like the Beyonce, which combines honey-flavored Irish whiskey, ginger-mint simple syrup and lemon juice. (Vondenstein promises that if the pop goddess herself comes in and orders the drink, it’ll be on the house.)

“Baton Rouge has always been overshadowed by New Orleans, and we want to change that by making Baton Rouge and New Orleans more like the Twin Cities up in Minnesota,” says Rivera. “St. Paul is the capital, and Minneapolis is bigger, but they work together to create this huge culinary community.”

A sense of cooperation and camaraderie radiates whenever the Gastreaux team discusses their work. Nick Puletti, a sous chef with GastreauxNomica, moved to Baton Rouge to attend LSU in 2010 and was quickly taken under Rivera’s wing. “We believe in and love supporting each other. Like last night, Ryan did a dinner in Downtown Baton Rouge, and we all showed up for him. I don’t know if it’s arrogance or what, but we believe that we can outcook just about anybody, anywhere.”

And he might just be right. In addition to the Gastreaux team, the city’s rich with a plethora of fresh talent. There are the chefs at classic-leaning restaurants pushing their menus in exciting new directions — like Peter Sclafani of Ruffino’s and Chris Motto of Mansurs on the Boulevard. At Chef Kelley McCann’s Kalurah Street Grill, wok-seared shishito peppers and rabbit ragout sit happily side by side on the menu. And a new wave of contemporary gastropubs, like The Overpass Merchant, certainly opens up new vistas for those looking for snappy ways to pair their tea-brined fried chicken sandwich with local beers.

Make no mistake about it: These chefs are interested in playing the long game to improve and diversify the city’s dining scene for decades to come, creating a place where tradition and innovation can cook side by side.

So Fresh, So Clean

Of course, diversifying the city’s dining options also means introducing a variety of straight-from-the-garden ingredients to balance out the less health-friendly explorations. Enter Pat Fellows: founder of FRESHJUNKIE, a GastreauxNomica member and an entrepreneurial dynamo in the city.

“I’m trying to cook healthy food in the most unhealthy place in the world,” Fellows teases.

FRESHJUNKIE is a restaurant specializing in salads and wraps, and Fellows considers himself something of an expert in the field.

“My strength is grilling and coming up with creative, delicious dressings — things that might give people a healthy meal for the first time, but they’re still going to enjoy it. When we started out, we made everything healthy but we never really sold it as healthy. We just had great flavor profiles, and it was kind of unassuming. We didn’t smash them in the face with it.”

Fellows also runs Somos Bandidos, a taco joint, as well as a race production company, FRESHJUNKIE Racing, which produces 12 events a year across the Gulf Coast. (Whew.) And where does Fellows pick up his good-for-you fuel for all of these endeavors?

“I might be the odd man out a little bit with GastreauxNomica because I come from such a different culinary background, but it’s great to be a part of this new guard.” 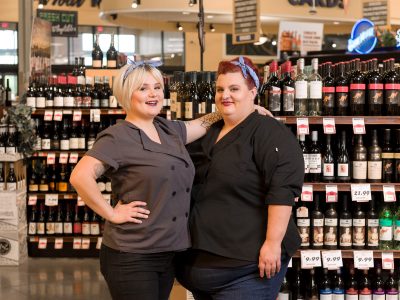 This experimental, devil-may-care attitude towards flipping the script on tradition also extends to the world of catering in the city. Sydney Harkins and Jamie Brown are a duo of fireballs who, with their powers combined, make up the BouillaBabes. And while their company name clearly pays cheeky homage to the traditional French Provençal seafood stew (get it?), their attitude towards their guests is anything but cheeky.

“We never stop cooking, and we’re always thinking about cooking even when we’re nowhere near a kitchen,” says Harkins. “I was cuddling with my dog the other night and texted Jamie to say, ‘Yo, why don’t we put chorizo in this new dish we’re doing?’ It’s that way all the time.”

The pair met in April via Rivera (naturally) and immediately bonded over a desire to both support and raise the profile of female chefs in the city.

“We were like, ‘People are catching on that women are badass in a male-dominated field, and now that people are getting with the times, let’s capitalize on that!’” Harkins explains. “We’re female-centric and very much female empowerment, right down to our decor. If you look on TV at female chefs, it’s mostly this total ‘Holly Homemaker’ look. We definitely aren’t that. We want to be like your best friend, but better.”

The BouillaBabes are also about as populist as they come. Through an innovative pricing model and a desire to work with clients’ budgetary needs in mind, Harkins and Brown are making catering accessible for folks who might’ve never considered it an option.

That also means being out and about as a fixture in neighborhoods across the city.

“One of the things I want BouillaBabes to focus on is partaking of events that are neighborhood-centric, and to sell food in the middle of a local arts festival or a street party alongside acrobats and live bands. We want to be an active part of the community,” says Brown.

For those looking to bring a little bit of GastreauxNomica-inspired innovation to their holiday traditions this year, don’t sweat it: The crew has you covered.

Looking for a dish that can pull double duty? Andre upgrades his sweet potato casserole with a pretzel crumble on top, and swears by its ability to be both a side and a dessert. Puletti gussies up store-bought stuffing with hazelnuts and herbs, noting that simply adding fresher ingredients can make all the difference, even in not-quite-from-scratch dishes. Brown turns her sweet potatoes into a sweet bread, and also assigns the dish two very important roles.

“My dad loves sweet potatoes, and I like to do a sweet potato cranberry quick bread. Not only is it delicious, but you can gift it. I have a huge Italian family, so I just bake stuff for folks as gifts.”

Looking to stay healthy? Fellows is your guy. “I try to make subtle changes to things I love. Mashed potatoes are better with butter and cream, but you can put in a quarter of them and still get the same flavor. I also grill a turkey. It’s not very difficult, and you sear it off on a grill or finish it in the oven. I can’t in good conscience make green bean casserole, so we’ll do roasted green beans with lemon zest, and it’s super simple. It’s all about balance, not just more for more’s sake.”

The hallmark of a community leader is not just involvement, but a willingness to push against the grain, however big or small, in order to foster a better place to live (and in this case, eat) for everyone. The brains behind GastreauxNomica know that, at the end of the day, a “lift as you climb” mentality among chefs is the best way to push one another to new, creative heights.

“I want to see friendly competition in the city so we can all improve each other, and lift each other up so that the entire food chain gets better,” says Puletti. “The coolest thing is people are starting to realize that it’s really chefs that drive the innovation instead of just the restaurant itself. If you find a chef you really like, wherever the chef goes, it’s going to be good. We want to educate y’all on how we think it should be.”