There’s a scene in my friend Mara Novak’s unpublished first novel (I have the privilege of being one of her early readers). Something devastating has just happened to Ellen, the female protagonist. In the wake of this unlooked-for tragedy, she finds her way to the kitchen of Ginny, her best friend.

“Ginny’s kitchen is like a warm cave, a secret den. The dark beams make the low ceiling feel even lower, and the walls are covered with baskets and bunches of herbs and pictures of chickens. The kettle is just coming to a boil when Ellen steps into the steamy banana-scented air. Ginny hugs her, while the kettle works itself up to a scream, and they both ignore it.

“‘How are you doing?’ Ginny asks as she pours (the) water…

“Ellen has given several answers to this question over the past week:

“But to Ginny she says, ‘I can’t remember anything I’ve done this week. I don’t think I’ve eaten.’

“‘You don’t remember, or you really haven’t eaten?’

“‘You’re going to eat this.’ Ginny slices off a slab … (of banana coffee cake…)”

How is Ginny so sure? What makes the offer of something sweet, warm, homemade, served in a kitchen still fragrant from baking, so deeply comforting? Why is its “there, there, it’ll be okay” nature enhanced when served with hot, dark, strong coffee?

First off, confusingly, it’s not a cake that includes coffee in its batter. Rather, it’s a cake specifically intended to be served with coffee. In its batter are the commonplace ingredients of most cakes: butter, sugar, flour, eggs, milk (or another liquid), leavening, vanilla and/or other flavorings. And coffee cakes as made in this country almost always include cinnamon.

A perfect American-style coffee cake combines these ingredients in proportions that yield a single-layer cake, exceptionally moist and tender, sweet but not crazy-sweet, decidedly buttery. It’s quickly mixed, leavened with baking powder and/or soda (we leave the yeast-risen varieties to the Europeans, who evidently have more time on their hands than we do, or at least are better at planning ahead).

And, American coffee cake is not frosted. The lack of frosting (okay, sometimes there’s a little decorative squiggle of white icing, but not generally) is, I think, supposed to fool you into thinking it is less “cake” than it actually is, so therefore you can eat it with impunity as a mid-morning or afternoon snack, or at breakfast, as you would not, say, a layer cake covered with chocolate frosting. (I would advise not being fooled; coffee cake is definitely cake and, alas, there is no such thing, nutritionally and calorically speaking, as eating cake with impunity. Sometimes, however, I think there is a psychological immunity, as when Ginny serves her friend Ellen, in Mara’s still-untitled novel.)

In lieu of frosting, coffee cakes are usually sprinkled with streusel, a baked-on crumbly topping. The streusel, besides giving the characteristic crunch, is inviting and interesting, but not all that showy. However, it’s iconic. That streusel conveys “coffee cake” as clearly as the crisscrossed, pressed tines of a fork on a light-brown, flattened disc signal “peanut butter cookie.”

From these basics on, it’s just theme and variation. Sometimes a portion of the streusel is layered into the batter. Sometimes it’s speckled with walnuts or almonds or chocolate. Sometimes fruit — fresh or dried, chopped if large — is included; sometimes the fruit appears as a swirl of jam. The one served by Ginny in my friend Mara’s novel goes whole hog: It’s “full of walnuts and chopped apricots and chocolate chips and crystallized ginger.”

So there you have it: Coffee cakes are simple-to-make confections, to which you can give any number of signature twists, and which even, conveniently, come out of the oven with topping already in place. Speaking of which, though they’re divine straight out of the oven and a little warm, they don’t suffer by being made a day in advance and then reheated briefly. Double the recipe, and serve one at a large holiday brunch. Or, take one to a potluck — not only will it vanish in a flash, but it travels well, in the pan it was baked in, so there won’t be any slide-around layers or icing that drips in a hot car.

I can also tell you, from experience, that such cakes are the perfect addition to a country inn breakfast. I know because, once upon a time, I owned a country inn, Dairy Hollow House, with my late husband, Ned Shank, in Eureka Springs, Arkansas, a Victorian-era Ozark Mountain resort town. We made breakfasts (full breakfasts, delivered to each room daily, in gigantic split-oak baskets) for 18 years, and our guests adored them. The blueberry coffee cake recipe I’m about to offer you was one we got asked for so often I finally made copies of it to give to guests.

Blueberries grow beautifully in the Ozarks; they grow with vigor and are not afflicted by pests, so at least at that time, all blueberries were organic. Of course we wanted to use them; it was “regionally right” to do so, and damn, those blueberries were delicious. (I must say, and I hope I’m not showing off, that Dairy Hollow House, 1982-1998, was “farm to table” way before “farm to table” was cool.) Often, when we could sneak a day off, we would go to a pick-your-own place called Blueberry Hill, as in the place where Fats Domino found his thrill. Was our coffee cake extra good because it was redolent with the atmosphere of picking, under the sun, bees buzzing, the plunk of berries dropped into a container, the finding spray after spray of that dark blue fruit misted with white, the berries popped into our mouths, the having slipped off from work in those cell-phone-free days — was this a, or the, secret ingredient?

Maybe yes, maybe no. For sure, ours was more tender than most, because we used an acidic liquid (sour cream and yogurt) rather than sweet milk, leavening it with baking soda, not just powder. And because it was more tender, the streusel contrasted all the more delightfully with the cake.

I mentioned psychological immunity earlier. That there are times when considerations of calories and sugar content must be put aside. When comfort and conversation are required, coffee cake and coffee with a friend are mysteriously, powerfully conducive to sympathy and the sharing of burdens and perplexity. The coffee is energizing, the cake is comforting. The intangible — friendship and succor, life going on — is made tangible.

“‘I’m starving suddenly,’ Ellen says, in Mara’s novel. “‘Maybe I just needed to get away.’ Ellen is through the first slice and halfway into another, just as large, before she pauses for breath. Ginny sets a mug … in front of her and Ellen’s throat closes hard and she is wheezing and howling and her tears are splashing onto her plate.”

Salty tears, bitter coffee and a shared slice of rich, warm blueberry-studded cake to sweeten them. Now, isn’t everything better? 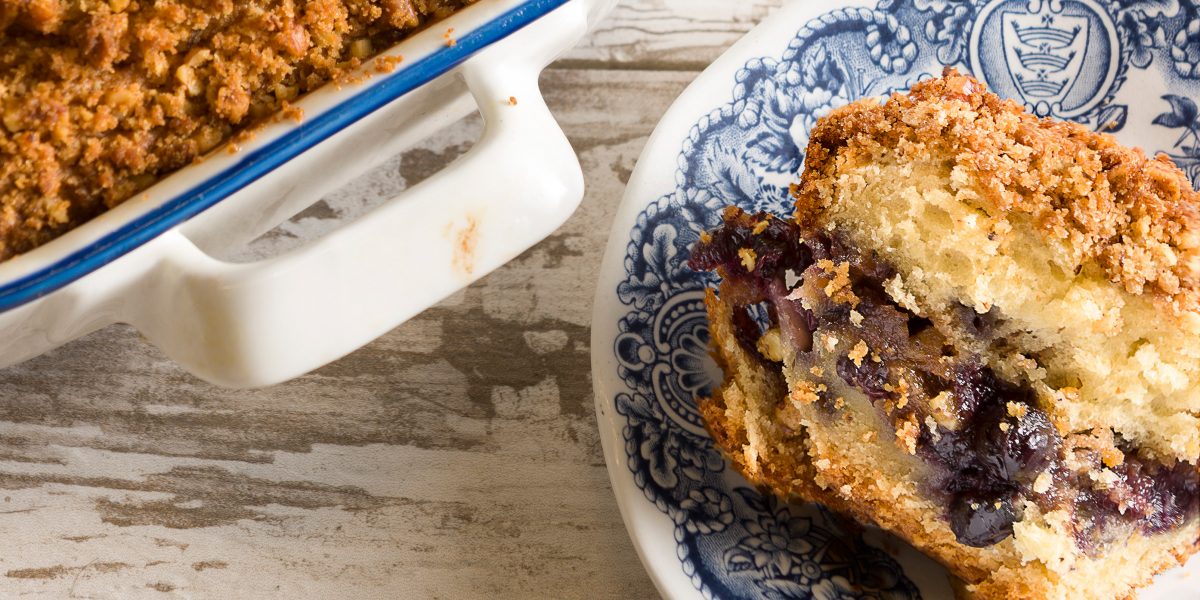