2 boxes Jiffy Cornbread Mix, assembled according to package directions  with 1 large egg and 1/2 cup milk. Do not bake.

Prepare the cornbread mix according to package directions, using 1 egg and 1/2 cup milk. Do not bake.

Melt the butter in a cast-iron skillet over medium-high heat, then add the onion, bell pepper and green onions. Cook until tender, stirring occasionally.

Increase the heat to high, allowing the butter to become extremely hot. Pour the cornbread batter over the hot butter and vegetables, but be very careful as it will splatter a little. Place the skillet in the preheated oven and bake for 15 minutes.

Remove skillet from the oven and sprinkle the cheddar cheese over the top of the cornbread. Return skillet to the oven for an additional 5 minutes.

Once the cheese is melted, and a toothpick inserted into the middle of the cornbread comes out clean, remove the skillet from the oven. Allow the cornbread to cool slightly before serving. 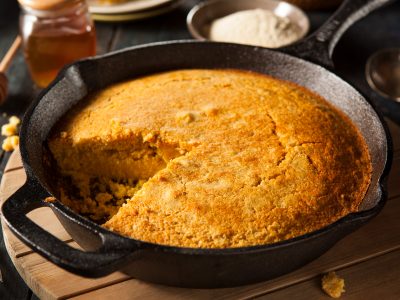